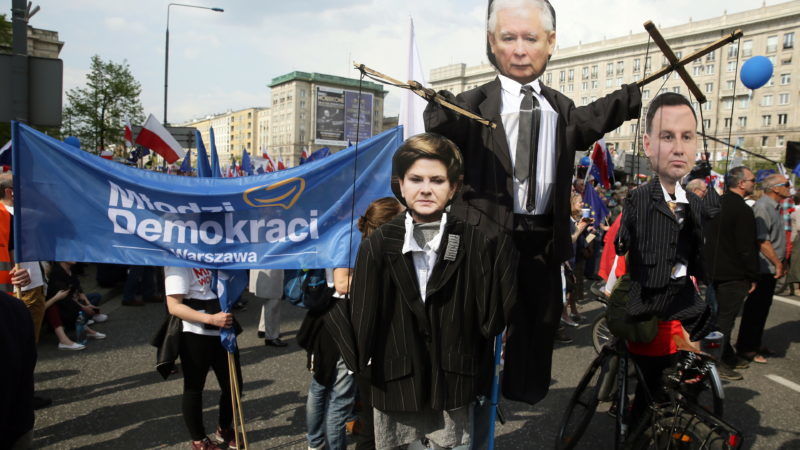 Tens of thousands demonstrated in Warsaw against Poland’s government on Saturday (6 May), saying the rule of law was at stake after a slew of controversial reforms and appointments to public broadcasters.

The protest, called by the country’s main liberal opposition party, came shortly after an opinion poll showed it pulling ahead of the right-wing nationalist Law and Justice (PiS) government.

Since winning power in October 2015 elections, the PiS has pushed through a string of changes that have led to mass protests at home and a threat of EU sanctions.

“I’m afraid that the European Union will fall apart; there’s already Brexit, and there’s a risk that if Poland doesn’t respect democracy and the rule of law it could be thrown out of the EU,” Anna Szadkowska, who marched wrapped up in an EU flag, told AFP.

“It could all lead to a new war in Europe,” she added.

PO leader Grzegorz Schetyna, referring to PiS party chief Jarosław Kaczyński, told the crowds: “Chairman Kaczyński says Poland is a free country and that nothing threatens that freedom. This isn’t true and we know it.

“We want a democratic, pro-European and proud Poland that seeks partners and friends in the European Union, not enemies.

“We know how to stop the bad PiS government and we’ll do it.”

Kaczyński, widely regarded as Poland’s de facto decision-maker despite holding no senior government post, rejected the accusations, insisted that rights were being respected.

But protester Tadeusz Kazimierczak said that “right now we have the beginning of a dictatorship.”

“The tentacles of power will squeeze more parts of our lives like an octopus,” the retired dentist told AFP. “I want to oppose it all.”

While local government officials allied to the organisers said the march drew 90,000 people, police put the number at 12,000. AFP journalists on site estimated 50,000 marchers in the sunshine, before rain came.

The PO liberals accuse Kaczyński’s populist government of using its “good change” policy to undermine the independence of the Constitutional Court and other public institutions, such as television and radio stations.

The PiS, which swept back into power partly by playing on fears of an immigration influx, has also come under scrutiny for installing loyalists as directors in state-controlled enterprises.

The party had been out of power for almost a decade.

But latest polling shows the PO scoring 31%, ahead of the PiS (29%), the first time the opposition has led since the October 2015 election.