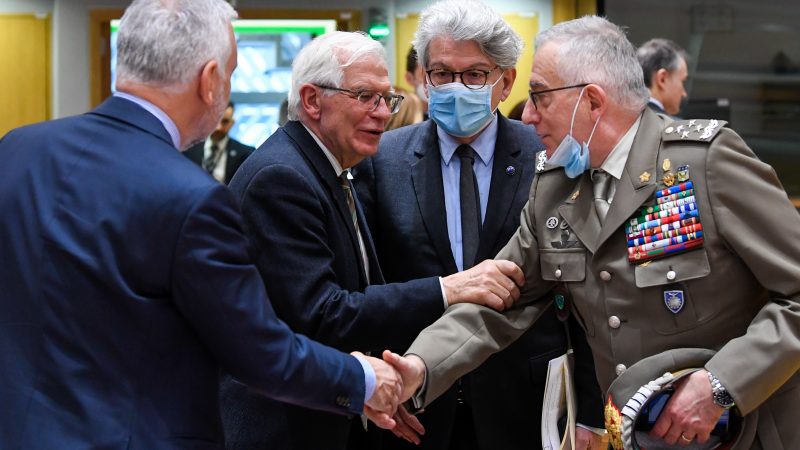 EU leaders are set to issue their final approval later this week during their summit Thursday and Friday. [European Union]

After two years in the making, EU foreign and defence ministers green-lighted the EU’s future military strategy blueprint on Monday (21 March), which foresees to boost the bloc’s security and defence by 2030.

“The threats are rising and the cost of inaction is clear. The Strategic Compass is a guide for action,” EU’s chief diplomat Josep Borrell said.

“The adoption of this document sends a strong signal of unity and resolve. And it comes at a very important moment because we certainly need to increase our capacities on security and defence,” he added.

EU leaders are set to issue their final approval later this week during their summit on Thursday and Friday, also to be attended by US President Joe Biden.

For France, with French President Emmanuel Macron’s long-standing demand for EU “strategic autonomy”, the document is a centrepiece of the French EU presidency but has been overshadowed by the war in Ukraine.

The first draft had been presented to the EU foreign ministers in mid-November, with the aim for the document to “set out a common strategic vision for EU security and defence for the next 5-10 years”.

Russia already then had topped the threat analysis section, but the blueprint text, at this point already revised six times by member states, includes language that would have been considered utterly inconceivable as recently as two years ago.

Putin’s invasion of Ukraine has prompted a significant rewrite of the document, with the security threat of Moscow’s aggression becoming the red thread in the latest versions of the paper.

“Certainly, it [the document] is not an answer to the Ukrainian war – we started working on it two years ago,” Borrell told reporters.

“But it is very timely that we approve this Strategic Compass in a moment in which every citizen in Europe can understand the purpose of a document that wants to increase the strength of the EU as a security provider,” he added.

The final version states that the “more hostile security environment is forcing us to take a quantum leap forward, strengthening our will and ability to act”.

However, for the EU this mostly means it will limit itself to limited crisis operations through the newly created EU Rapid Deployment Capacity, a 5,000-strong standing force that could be deployed “in non-permissive environments”.

It is supposed to be based on national capabilities and “substantially changed EU battlegroups”, which have existed only on paper since 2009 and have never been used.

In the drafting process, Eastern European member states had insisted on adding an enforced reference that NATO “remains the foundation of the collective defence of its members” at the beginning of the document, repeated several times, setting a limit to the bloc’s further ambitions.

With that, member states have for the first time mapped out a division of labour between the two organisations, which they stress is complementary to NATO.

“It is not about creating a European army,” Borrell told reporters, specifying this would involve joint exercises, for example in the cyber area, but not be an equivalent for NATO’s duty to provide assistance.

“We will be acting in complementarity with NATO, which remains certainly the cornerstone of the territorial defence of Europe, but we, Europeans, with this document, stated our strong will to be a stronger security provider for our citizens,” he added.

While 21 EU member states belong to NATO, Sweden and Finland made sure the Strategic Compass includes a pledge to the EU treaty’s mutual defence clause, Article 42(7).

With the war in Ukraine, the EU has broken some of its long-standing taboos, one most notable being that it cannot use its resources to provide arms to a third country, even if it is under distress.

“This is only the beginning (…) We need to study our defence gaps, we need to fill these defence gaps. We need to be effective and coordinated. We have to increase our resilience,” Borrell told reporters.

If the ambition of some influential EU member states such as France has been for the EU to emancipate itself from NATO by pursuing its own defence project, Putin’s war in Ukraine has certainly upset such plans.

With war at the EU’s borders, the trust in the transatlantic alliance has never been stronger in EU and NATO countries.

Conversely, many other EU countries, especially from the East, who have advocated “complementarity” between NATO and the EU defence, appear to be close to seeing their objectives fulfilled.