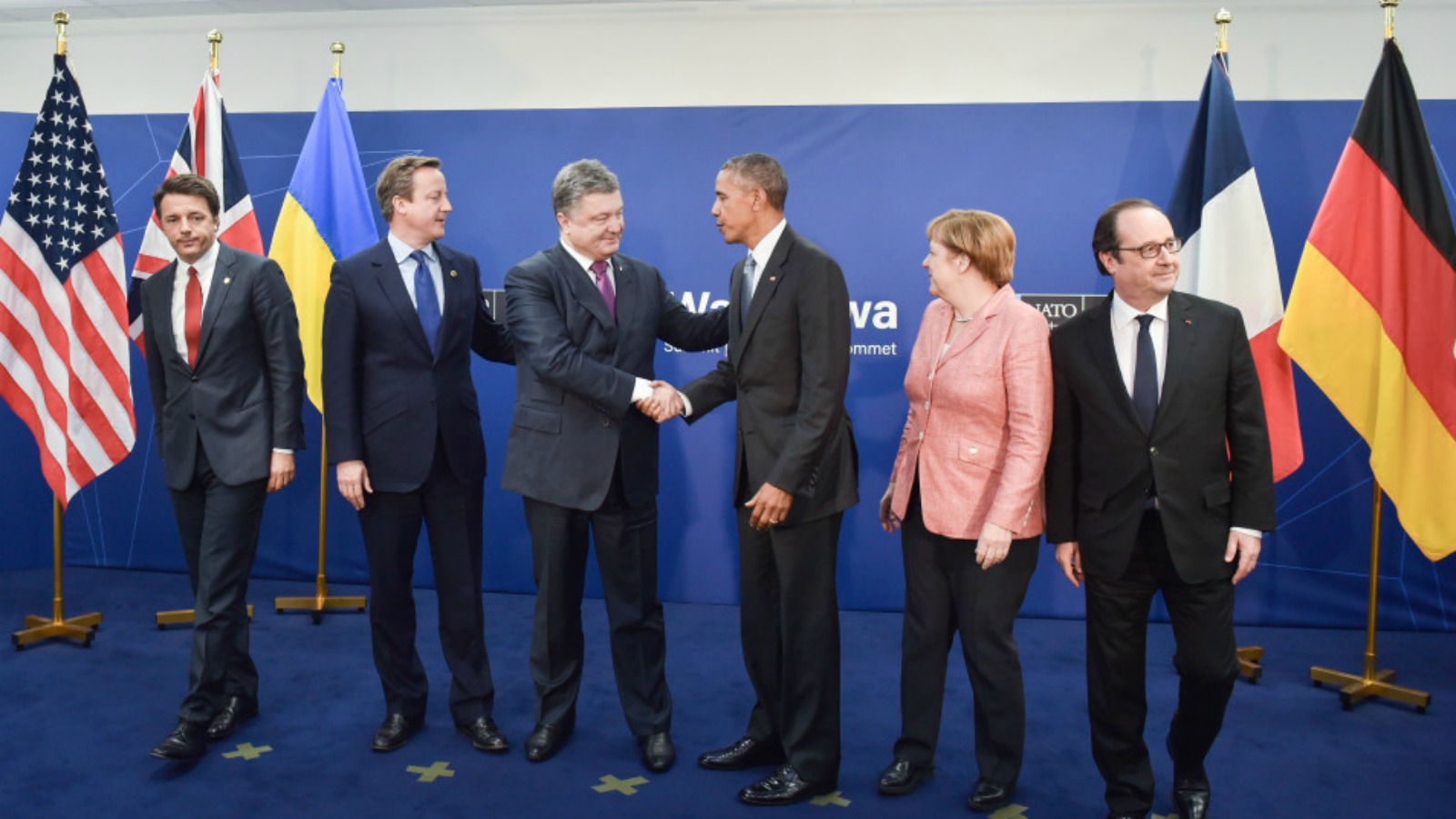 Poroshenko and Obama shake hands, while some other leaders look the other way. [President of Ukraine]

NATO agreed during the two-day Warsaw summit to boost its eastern flank in response to Russia’s 2014 annexation of Crimea, and Moscow’s subsequent backing for rebels fighting Kyiv’s troops in eastern Ukraine.

But after more than two years of Western sanctions on Russia, some in NATO and the European Union are pushing for a softer stance towards Moscow and growing impatient with what they see as sluggish progress in modernising the economy and fighting corruption in Ukraine.

German Chancellor Angela Merkel offered Moscow her “outstretched hand for dialogue” today (7 July), a day before NATO leaders meet in Warsaw to cement a new deterrent against what they see as an emboldened Russia.

“Allies are united in their support for Ukraine’s sovereignty and territorial integrity,” he said. “We do not and we will not recognise Russia’s illegal and illegitimate annexation of Crimea and we condemn Russia’s deliberate destabilisation of eastern Ukraine.”

He restated NATO’s political support for Kyiv, and said the alliance would help it tackle risks from improvised explosive devices on top of other assistance aimed at improving Ukraine’s military capabilities that had been agreed on before.

“These decisions demonstrate that NATO stands firmly for Ukraine,” Poroshenko told the presser. “Now we have to make the necessary reforms.”

“They will bring us closer to the criteria and then the people of Ukraine will decide what we’ll do further,” he said of the prospect of Ukraine’s eventual NATO membership, which had been promised to Kyiv in 2008, but is now off the table.

For all the friendly rhetoric, Kyiv has come under increased pressure from the West in recent weeks to devolve power and hold local elections in eastern Ukraine, where a truce is patchy. 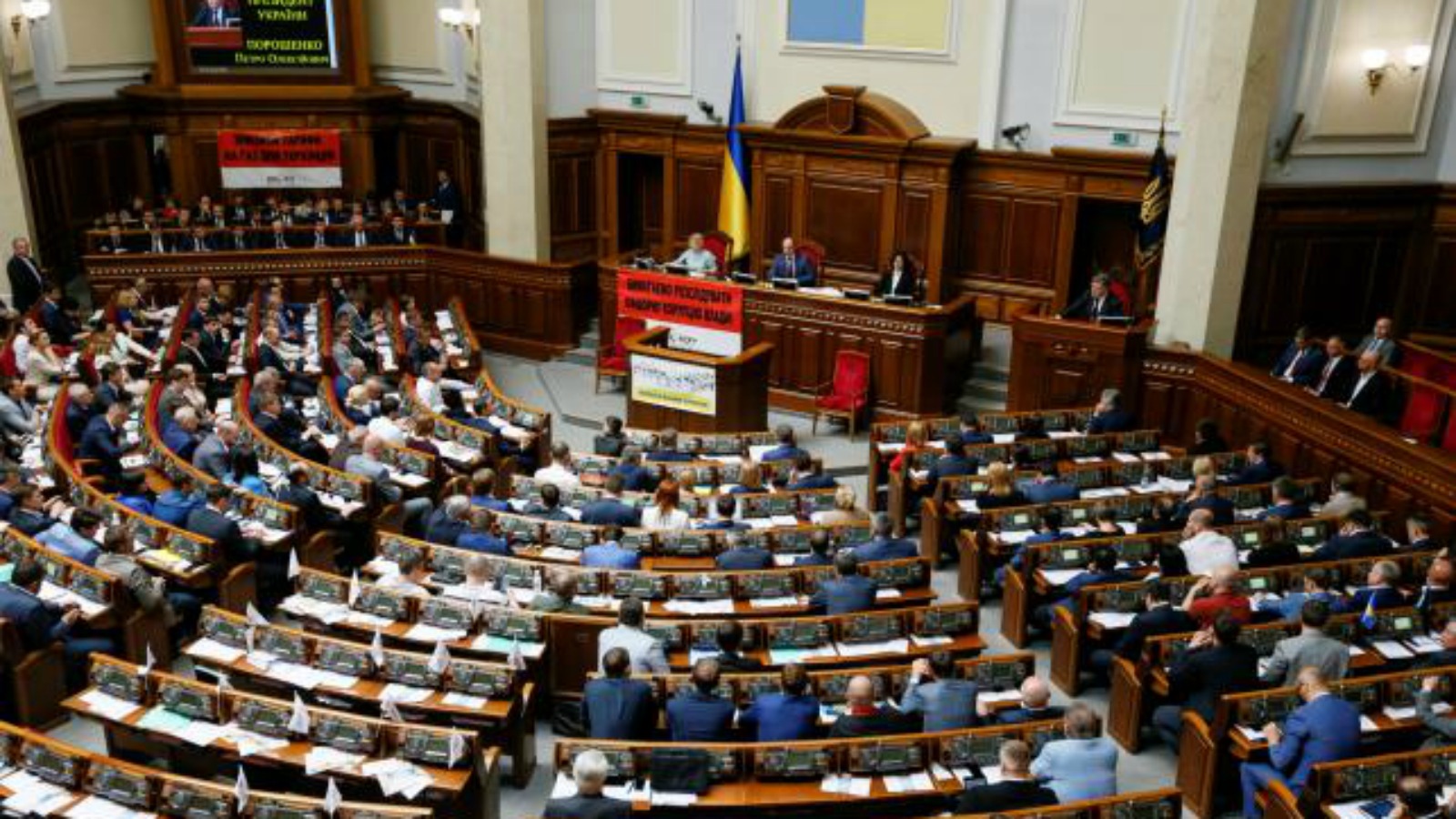 Ukraine’s parliament approved yesterday (2 June) judicial reforms that Western backers say are needed to fight corruption, in the first constitutional vote the ruling coalition has pushed through since an overhaul of the government in April.

The broader peace plan for the eastern Donbass region, negotiated in Minsk between Ukraine and Russia by Germany and France, has stalled for months. Paris and Berlin have now renewed efforts to implement it in full.

That means Kyiv should also grant Donbass special legal status and decentralise the country through a constitutional reform. Moscow is obliged to help Kyiv regain control of Ukraine’s eastern border, and both sides must withdraw heavy arms to ensure an effective ceasefire in eastern Ukraine.

The leaders of the United States, Germany, France and Italy met Poroshenko separately on the sidelines of the summit to express support for Ukraine, a White House official said.

“The leaders agreed that Ukraine has made considerable progress on political, economic, and anti-corruption reforms, but that more work must be done,” the official added.

Poroshenko and French President François Hollande both said the six leaders worked on a ‘roadmap’ of security steps needed in Donbass to permit elections there in the coming months.

In Germany, the head of Chancellor Angela Merkel’s junior coalition partner said the West should return to the negotiating table with Russia and he had “strong doubt” whether increasing NATO’s military presence in eastern Europe would help that.

“I’m not in favour of us constantly escalating the relationship with Russia,” Vice-Chancellor Sigmar Gabriel, leader of the Social Democratic Party, said in Nuremberg.

In another sign of a cautious thaw with Moscow, NATO and Russian envoys to Brussels will meet for the second time since Crimea on Wednesday (13 July), including to discuss Ukraine.

Ukraine’s deputy prime minister said NATO would benefit from Kyiv’s experience of fighting “a hybrid war” against Russia on its soil, which she said included the deployment of troops with no insignia and a massive disinformation campaign.

Ivanna Klympush-Tsintsadze defended Kyiv’s record on reforms and vented frustration with criticism from the West.

“Lack of prospective NATO membership for Ukraine has a negative impact on the security environment in the region,” she said. “The West needs to make a very strategic, long-term choice and not look for any excuses today to turn away from Ukraine.”