University looking to the West is the ‘new face of Azerbaijan,’ says vice-rector 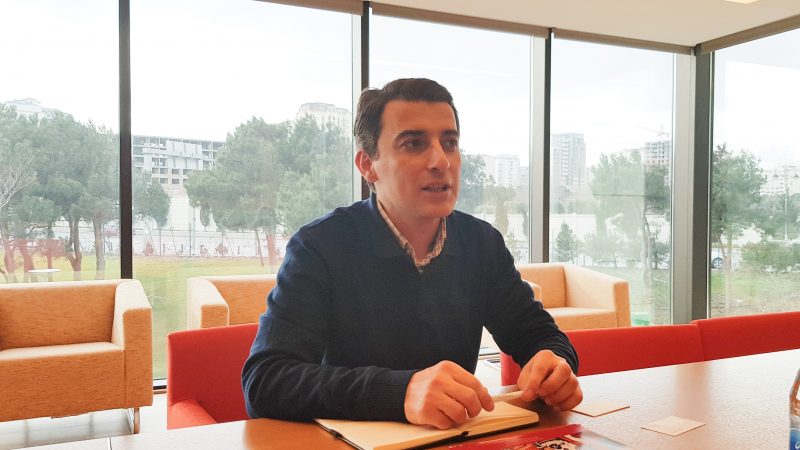 Talking about Azerbaijan’s snap parliamentary election on Sunday (9 February), the executive vice-rector of the country’s prestigious ADA University, Fariz Ismailzade, said it was “is clearly very different from previous elections” in that it is less “passive”.

Ismailzade, who sat down with journalists as the polls opened on Sunday, said the dismissal of the parliament created a “shock” and an opportunity for the many “Western-educated young people in the society who are looking for an opportunity to be in public service.”

ADA University was originally established to train diplomats for the ministry of foreign affairs during a time when new Azerbaijani diplomatic missions were opening.

Today, the institution already boasts about 3,000 pupils and has branched out to business, economics, public policy, computer science and other fields.

“We have two hats,” said Ismailzade. “One is to serve the ministry’s needs and the other to create a new generation of Azerbaijanis who are different in their skills and their abilities,” underlining ADA’s ambition to be academically free despite its partnership with the government.

The university also hopes to play an important role in bringing back those who have left the country decades ago.

“In Azerbaijan, we lack good foreign-experienced professors,” pointed out Ismailzade. “So we are specifically targeting” Azerbaijanis who left 10-15 years ago, by “financing special grants.”

While Ismaizade admitted that special treatment of foreign-trained faculty may be unfair to academics who stayed but argued that the labour market should reward those who are more skilled.

“If you have a PhD from Harvard or Sorbonne, you are better qualified in the market than the Azerbaijani who has never been abroad. So we are looking at it from the market perspective.”

ADA’s modern ‘green’ campus, opened in 2012 and heated entirely with geothermal energy, is designed to serve as a testament to the government’s ambition to invest in education.

“Our university is representing the new face of Azerbaijan,” said Ismailzade. “Azerbaijan’s economy is growing and there is a need for young professionals.”

The administrator shared that the university paid special attention to the parliamentary elections not purely out of academic interest.

“We have several of our university representatives running for parliament,” including faculty, alumni and even a student, Ismailzade told journalists.

Mikayil, the student government president, successfully collected the 450 signatures necessary to be registered as a candidate and tried his luck in the exercise.

Sending children to London for the bachelor’s degree is not right, opined Ismailzade. First, “you have to study here in Azerbaijan, to understand your culture, values, traditions, these are important things in life — your national identity.”

However, the university seeks to attract foreign students to Azerbaijan by offering them full-ride scholarships for the duration of their studies.

ADA’s global outlook is also reflected in its collaboration with think tanks and international organisations, such as the UN and the EU. During his mandate as European Commission president, José Manuel Barroso signed a 5-year, 2 million euro grant with ADA University, when visiting the country’s capital in 2014.

“During this five-year project, we established a centre of excellence in EU studies,” said Ismailzade, that trained about 2000 civil servants in EU law and institutions, the bloc’s foreign and security policy, as well as established summer camps for school children and podcasts about the EU called AvropadASAN (“You’re in Europe”).

In terms of collaborating with other academic institutions, the main focus remains on Western establishments because “Azerbaijani youth is geared more towards going to Europe,” said Ismailzade, “but with the Russians, we have quite a good dialogue.”

While the university is considered public and receives funds from the state, it is seeking to be self-reliant.

“We are charging students because we believe that the university should have its own funds,”  said Ismailzade. We cannot rely on state funds alone “because our government budget depends on oil and gas revenues.”