Why Europe’s East does not trust the COVID-19 vaccine 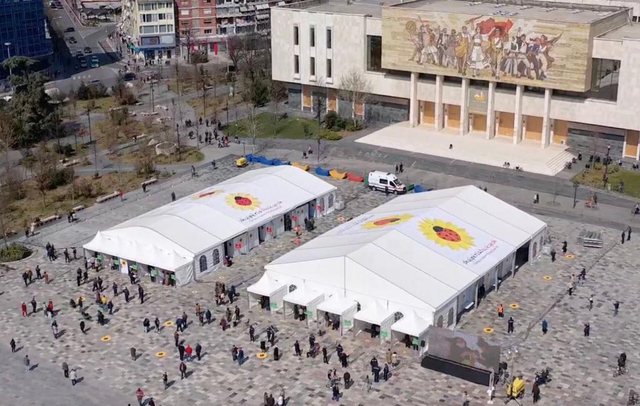 Pop-up vaccination clinics in the centre of every Albanian city and town have done little to quell fears over COVID-19 vaccinations. Photo: exit.al

As the COVID-19 pandemic progresses, an ever-growing divide between Western and Eastern Europe in terms of vaccination uptake becomes more apparent. But what’s driving it?

The COVID vaccination rate in Albania dropped 40% in October compared to September and August, as the country struggles to reach 50% coverage.

Vaccination rates peaked at 7,500 a day in July and 8,800 in August and September. During this time, the government mandated vaccinations for students over 18, healthcare workers, teachers, police, and state administration. But instead of encouraging increased vaccination, it seems to have had the opposite effect.

Currently, 47% of the population over 18 have had one dose of a vaccine, while only 41.3% have received both doses. The over 60s are the most vaccinated in terms of demographics, but takeup remains low among the younger generation.

The sluggish vaccination rates have been blamed on disinformation and conspiracy theories circulated on TV, online media, and social media.

The head of the national vaccination programme, Erida Nelaj, said people are reluctant to listen to doctor’s or scientific advice.

“The circulation of myths is very harmful in this situation. Sometimes people hear what they want to hear. Or they hear something wrong, but you like it and focus on it and use it as an element to not get vaccinated when you have to listen to science, listen to technicians, talk to your family doctor and listen to your advice. the doctor.”

The Albanian Intelligence Services found that the pandemic has been accompanied by “aggressive disinformation campaigns that negatively affected the response and public perception of the real danger of the pandemic.”

Meanwhile, Health Minister Ogerta Manastirliu said the government wants to surpass the World Health Organisation target of 70% by vaccinating all over 16s by February 2022.

But it’s not only Albania – Bulgaria and Romania are having difficulties with vaccination as well.

Bulgaria ranks second in the EU for COVID-19-related deaths over the last month and last in terms of vaccination, with just 21% having received both doses. Among medical staff, just 70% of doctors are fully vaccinated and some even propagate conspiracy theories or non-science based information.

EURACTIV Bulgaria reported that some GPs recommended that people with chronic diseases and pregnant women should not get vaccinated, the polar opposite of the scientific consensus.

In Romania, the situation is equally dire. COVID-19 cases and deaths have reached all-time highs while the health system is close to collapsing. Doctors and politicians have blamed disinformation and distrust in authorities for the low uptake of vaccines.

In non-EU state Serbia, just 43% are vaccinated though Serbia was the first country in the region to start mass vaccination. The number is even lower in Bosnia and Herzegovina, where just 15% have taken both jabs.

Similar stories can be seen in North Macedonia and Kosovo.

There is a stark contrast with Western Europe. In Spain, 79% of the population are fully vaccinated. Meanwhile, France has reached 69%, the UK 68%, Italy 72%, and Malta 85%. And this is not even related only to the availability of vaccines.

So what is the problem in the Balkans?

Bulgaria, Romania, Albania, North Macedonia, Kosovo, Serbia, BiH, and Croatia were under communist rule until 1990. During these periods, the authorities ruled with an iron fist and decisions and instructions were forced upon people with little concern for their wishes.

Democracy in the region is still fragile and distrust of governments is also fuelled by widespread corruption and a disregard for the rule of law.

A 2021 study by researchers at the London School of Economics found that countries with a Soviet Union past were linked to reduced trust in vaccines. Interestingly, they found that the longer a person was exposed to the Soviet regime, the less trust they had.

Richard Q.Turcsanyi of Palacky University in Czechia agreed. He said there is greater distrust and scepticism in the region when compared to the rest of Europe. This, he said, is due to coordinated disinformation, a misunderstanding of science, and a significant lack of trust in the government.

Public scepticism in Albania has been further exacerbated by apparent discrepancies in reporting deaths and cases.

In January 2021, INSTAT, the country’s official statistics publisher, said deaths increased by 25.8% in 2020 compared to the previous year.

The primary variable between 2019 and 2020 was the COVID-19 pandemic. The problem is that the government publicly recorded just 1,315 deaths from COVID-19 during the year. This leaves some 4,700 “excess deaths”, over what would be expected.

The trend continued into 2021. During the first three months of the year, 9,657 deaths were reported, an increase of 35% compared to the average number of 6,414 deaths in the same period in the four years before the pandemic.

Another concern is the incidence of positive tests. So far, the health ministry has reported that roughly 180,000 people have been diagnosed with COVID-19 since the pandemic began. But a survey by Euronews found that 37.8% of participants reported having had COVID-19, equivalent to 830,000 people.