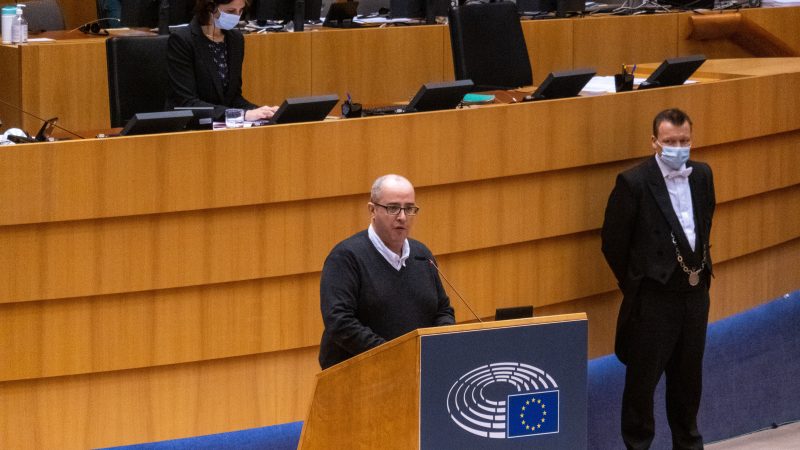 MEP Chris Macmanus during a plenary session at the european parliament

One important issue that the Conference on the Future of Europe needs to deal with is the relationship of the EU with the rest of the world. For me, that ‘rest of the world’ begins a few kilometres from my home in Sligo – the border that the British imposed in Ireland a hundred years ago, says Irish MEP, Chris MacManus.

As part of the ongoing Conference on the Future of Europe conversation, Irish MEP Chris MacManus argues that Irish unity is the obvious solution to Europe’s complex Brexit problem.

Britain has always sought to dominate its smaller western neighbour. Many in Ireland have looked to the European continent and further afield for support to avoid subjugation by its bigger neighbour.

In Brexit, we see this dynamic playing itself out again.

The Protocol is a messy compromise, but it provides some comfort to the majority in the north of Ireland who opposed Brexit. And it gives comfort to those who feared that Brexit would see border areas once again becoming heavily policed and militarised zones, with local roads being closed and lines of cars at customs posts.

But it doesn’t solve the problems caused by the border.

Even if the Protocol is implemented as agreed and operates smoothly, the border in Ireland will continue to be a source of tension between London and Brussels. Issues not covered by the Protocol (such as services and free movement of EU nationals) will damage the all-Ireland economy. And the British government will continue to use it to try to bypass the Trade and Cooperation Agreement.

Right now, we are witnessing a British government trying to hollow out the Good Friday Agreement and subsequent agreements. Nobody wants to see Ireland go back to those pre-GFA days, but the British are eroding peace at every turn. They refuse to implement the citizenship aspects of the GFA (1998). They have dragged their heels on legal recognition of the Irish language as provided for in the St Andrews Agreement (2006). They are going back on the agreement regarding legacy issues in the Stormont House Agreement (2014). So it comes as no surprise that they are trying to go back on the Withdrawal Agreement/Protocol as well.

In addition, the British government are introducing legislation on a range of other issues that are in breach of the European Convention on Human Rights, which is the bedrock of the Good Friday Agreement. As well as planning to repeal the Human Rights Act (which gives effect to the ECHR), they have:

– introduced an amnesty for British military committed crimes while serving in the north of Ireland;

– introduced an immigration bill that penalises refugees and asylum seekers

In addition to these departures from international human rights law, British ministers are openly hostile to international law and international agreements. This extends to a dismissal of the provisions of the GFA, which provide for a referendum on Irish unity.

To add insult to injury, the British government, which has always tried to deny its role in the conflict in Ireland, is now planning to issue an “authorised” history of the conflict.

Nearly 50% of the people living in the north of Ireland are Irish citizens, which is the entitlement of everybody born there. They rightly see themselves as also being EU citizens who have been dragged out of the EU against their will. Indeed, many in the north who identify themselves as British have no wish to entertain the fantasy world of “Global Britain” evoked by the remote government of the neighbouring island. Instead, they would welcome the opportunity to re-join the EU by uniting Ireland.

With all this in mind, the EU must do all in its can to acknowledge that the majority in the north of Ireland – including the almost 1 million Irish/EU citizens – never wanted to leave the EU and support the call for a democratic vote on their future. A future without a British border in Ireland. An Ireland reunited in the EU.

The EU, which has played such an important role in supporting the peace process in Ireland, could, by helping to end partition, bring to a conclusion the long and tragic assertion of British misrule in Ireland.

The Conference on the Future of Europe can be an important place to look forward to a reset of relations and a new era of cooperation between Britain and the EU. A British border in Ireland will prove to be a continuing obstacle to achieving such a goal.