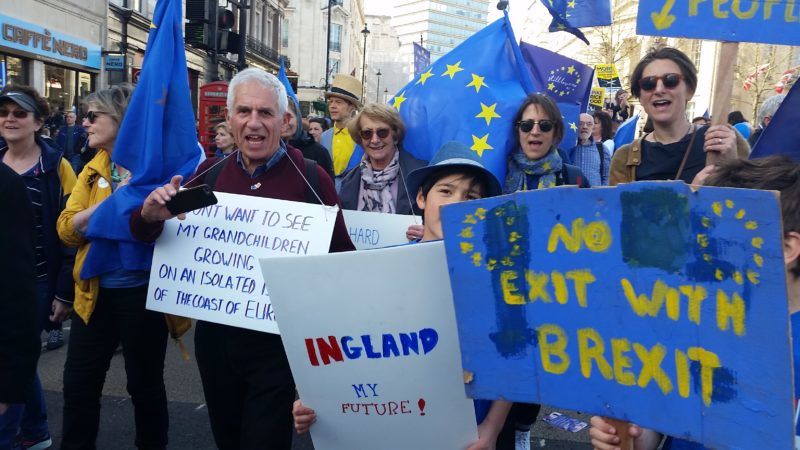 British people marching on the streets in London on 25 March, date of the 60th anniversary of the Treaty of Rome. [Sharon Leclercq-Spooner/EURACTIV]

Peter Alfandary is a British lawyer, who founded PRA CrossCultural, a consultancy that specialises in training and coaching professionals and senior executives on cross-cultural management skills.

The French have a saying for it: ‘C’est le ton qui fait la musique.’ Translated literally, it means that it’s the tone that defines the music. Its English version is less poetic; it’s not what you say, but how you say it. Getting the tone right will make all the difference between success and failure in the Brexit negotiations.

The success of international negotiations invariably depends on the negotiators having the requisite level of ‘Cultural Intelligence’ (CQ) to enable them to conclude a deal.

CQ involves deep cultural understanding and a real awareness by negotiators of the respective styles, tactics, preferences and mindsets of their counterparts. CQ is therefore going to be critically important in the upcoming Brexit negotiations.

It is the UK that is leaving the EU and the onus of getting this right, therefore falls more heavily on the British government than on the other EU member states.

The British tend not to be very good at what has been called the ‘vision thing’. They are highly transactional and pragmatic. Their natural tendency is to focus on the deal. Influenced by the great empirical philosophers — Bacon, Locke and Hume — they tend to reason inductively. Theirs is a facts-first/ bottom-up approach.

Much of the rest of Europe reasons deductively — Cartesian logic dominates thinking. The approach is, therefore, more top-down and principles led. The vision thing is important. The creation of a common logical framework is often a precursor to getting down to the details of the deal.

They will need to flex their style. They will need to be more patient than instinctively they would wish to be. And they will also need to understand that one of the most critical ingredients of a successful negotiation — trust — is itself ‘cultural’. Trust of the mind, facts-based trust, works in some cultures but in others trust of the heart prevails — do I like you, can I do business with you over the long term, and is there enough common empathy that can form the basis of a successful relationship at the end of the negotiating process.

Trust is, at the moment, in short supply. Dismayed and shocked by our decision to leave the EU, rebuilding trust is an absolute necessity. If they are to negotiate successfully, our leaders and our negotiators will need to invest a lot of time on the relationship side of things.

Combating the feeling of betrayal will need time; for Caesar, on the ides of March, it was already too late. This time, patience and real alignment when it comes to the style and the presentation of arguments can make all the difference.

The British position is a difficult one. If they are to be successful, they need to negotiate on two fronts — they need to end up with a good Brexit deal for the UK, but equally importantly, with a future relationship with the EU that sits comfortably with our ex-partners.

Divorce is never easy, but maintaining a harmonious relationship post divorce is often as important as reaching a financial deal. In the case of Europe of which Britain will always remain part of geographically and geopolitically, that future relationship will, in the long term, be crucially important.

So forget about hard, soft or a medium-cooked Brexit. We need to focus on a culturally intelligent Brexit. Our negotiators need to think long term; they need to flex their negotiating style to take account of context and culture; and, above all, if the musical score they end up with is to please all who will eventually listen to it, then they need to be very careful about tone. How we orchestrate the negotiations will make all the difference to the quality of the music.