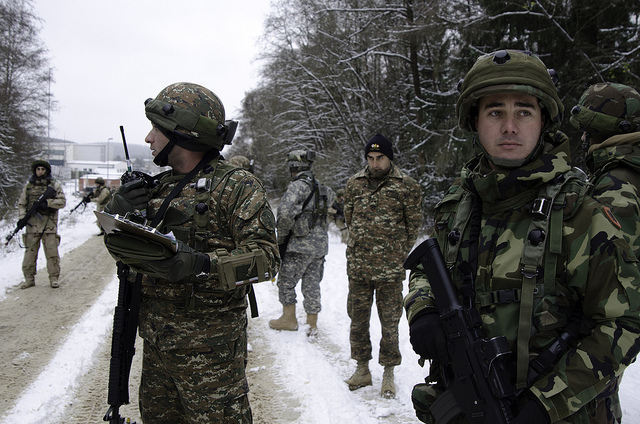 Could NATO be drawn in? Armenian infantry (left) on exercise with alliance forces. Germany, 2013. [7th Army/Flickr]

The nuclear threat from Armenia should not be taken lightly, writes Ilgar Gurbanov.

Ilgar Gurbanov is an Expert Advisor at the Baku-based Centre for Strategic Studies.

After four days of skirmishes in early April, along the line of contact in the occupied Nagorno-Karabakh region of Azerbaijan, Armenian politicians made international headlines by declaring “the presence of nuclear weapons in Armenia”.

Thus, the former Prime Minister of Armenia, and current MP, Hrant Bagratyan, claimed at a press conference on 29 April at the Armenian Media Centre, “We have the capacity to create nuclear weapons, [adding] we have nuclear weapons [in order] to protect Armenia and Nagorno-Karabakh against further attacks.” Armen Rustamyan, the head of the parliamentary faction of the Armenian Revolutionary Federation Dashnaktsutyun, made a supportive statement saying, “Hrant Bagratyan has grounds for such a statement as he has been a prime minister, [adding] who said that, we are banned of producing the weapons.”

These statements were made during a recent operation of the State Security Service of Georgia, which detained three Armenians in Georgia, who were trying to smuggle $200 million worth of radioactive materials (uranium U238).

It is assumed that the smuggling was orchestrated by Armenian businessmen, backed by the government. The affiliation of the detained Armenians with the Armenian Security Service was not excluded. The investigation indicates that each of them had previously been employees of the Metsamor nuclear power plant, an outdated Chernobyl-type NPP located in an earthquake-sensitive zone.

Meanwhile, the nuclear fuels and radioactive wastes from Metsamor NPP are kept in the occupied territories of Azerbaijan by Armenia, and the Nagorno-Karabakh region is used for the illegal smuggling of nuclear materials.

Armine Sahakyan, a columnist for the Kyiv Post, wrote in the Huffington Post that in the past, Armenians have been particularly active in smuggling nuclear materials in the region. They have been arrested in Georgia more than once, while carrying highly enriched uranium (capable of making a bomb). Armenians have been previously detained for smuggling radioactive magerials in Ukraine (Beregovo, 1999), in Georgia (Samskhe-Javakheti, 2001; Sadakhli-Bagratashen, 2003/2004/2009/2014; Sarpi, 2007; Tbilisi, 2000/2010) and in Armenia (Meghri, 2003).

Since Armenia is a landlocked country, the smugglers can use Georgia to get access to Black Sea ports for the trafficking of radioactive materials, possibly to the Middle East, writes Sahakyan. Although, the Georgian State Security Service has not detected the prospective buyer[s], they were supposed to be al-Qaeda and ISIS. Because, according to intelligence officials, ISIS and other terrorist groups are trying to obtain relevant materials to build a “dirty bomb” which they could detonate in Europe or the United States.

Moreover, retired Armenian Maj.Gen. Arkady Ter-Tadevosyan had earlier voiced the possibility of using of a dirty bomb against Azerbaijan. “Armenia has a weapon created by Armenians, which the enemy is not aware of, in order to apply it in the most difficult time,” said Ter-Tadevosyan.

A month after Ter-Tadevosyan’s statement, on 10 May, representatives of the Azerbaijan National Agency for Mine Action territories (ANAMA)  found unexploded munition greased withthe  banned white phosphorus in the villages of Eskipara and Garagadzhi, in Azerbaijan. The Armenian troops had used these projectiles during the shelling of the Terter district in April.

Actually, these were 122 mm artillery shells (type D-4) containing 3.6 kg of P-4 (the chemical code for white phosphorus), which is prohibited by international convention. The radius of shrapnel from the explosion of this projectile is 15-20 metres, and creates a toxic cloud of white smoke on the site of the explosion, which is fatal for all life in the affected area. A dose of 0.1 grams of white phosphorus is lethal for humans. An officer of the chemical service in the ministry of defence, Lieutenant-Colonel Mustajab Niyarov, says that the white phosphorus is used for equipping aerial bombs, aircraft cluster munitions, artillery shells and mines.

Following those events, Azarbaijan’s foreign and defence ministries organized a trip to the front line for the accredited military attaches in Azerbaijan, where they were informed  of the ammunition covered with banned white phosphorus by Armenia. According to the spokesman of Azerbaijan’s foreign ministry, Hikmet Hajiyev, “given the fact that many civilians live in this village, the main purpose of Armenia’s armed forces has been the mass destruction of the civilian population through the use of banned ammunition with the chemical composition”.

To sum up, Armenian politicians publicly urged the possibility of using nuclear weapons in the military operations against Azerbaijan, though the former is a signatory to the Treaty on the Non-Proliferation of Nuclear Weapons, the Convention on Physical Protection of Nuclear Material and the Convention on the Prohibition of the Development, Production, Stockpiling and Use of Bacteriological, Chemical and Toxic Weapons.

Over the past several years, the world community only focused its attention on the nuclear talks with Iran, while neglecting other potential nuclear arms spots in the neighbourhood. The bellicose rhetoric of Armenian politicians about the possible “utilization of nuclear weapons” is not that different from the warnings of a possible nuclear attack by North Korea in early March.

The use of ammunition containing chemical compounds would be hazardous, comparable to what was observed in Syria, where Bashar al-Assad’s regime used chemical weapons. Thus, the legal and security ramifications of the issue should not be neglected. Irresponsible statements from Armenia should be carefully examined and immediately reacted by international organizations. Retaliatory measures should be applied if necessary. Otherwise, undesirable incidents may occur in the region.