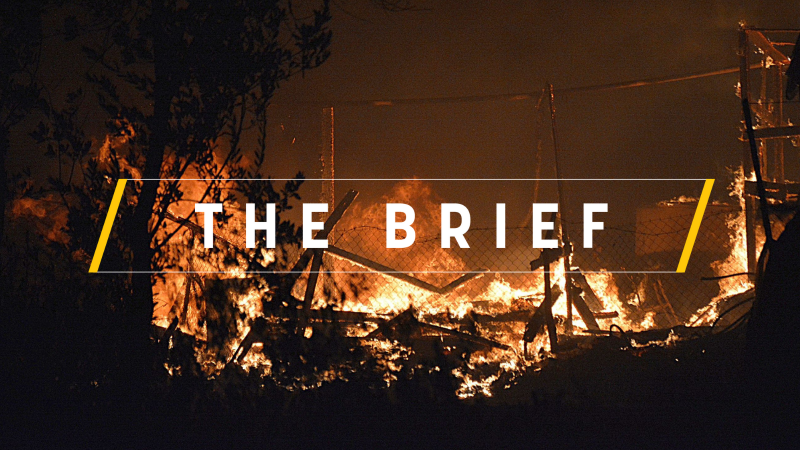 Moria is burning, and with it, the European values we pretend to uphold. This is how Green MEP Philippe Lamberts described the tragic events at Greece’s overcrowded migrant camp of Moria after a fire broke out there on Tuesday night.

After the photos of smouldering ruins flooded the media this morning, it is clear that what is burning today is Europe’s dignity.

EU values have been compromised for a long time now. It was described precisely in Ursula von der Leyen’s mission letter for Greek Commissioner Margaritis Schinas, which explicitly describes his role in finding “common ground” on migration.

More than 12,000 people have fled the Moria camp and have been on the streets of the island of Lesvos.

In an effort to hide their guilt, EU leaders have been busy expressing their solidarity and full support to migrants and refugees in the camp since early morning.

Ursula von der Leyen said that she was “deeply sorrowed by last night’s events at the Moria refugee camp in Greece. We stand ready to support, with member states”.

“Full solidarity with the people of Lesbos providing shelter, the migrants and staff. We are in touch with the Greek authorities and ready to mobilize support,” added European Council President Charles Michel.

Michel, incidentally, has been expressing the same level of solidarity regarding the Turkish warships which have been having a little cruising adventure in Greek waters for some time now.

The German government called on other member states to take in migrants.

What have all of them been doing until now? The much-awaited migration pact to replace the outdated Dublin II regulation has been delayed for many months, fundamentally, because of the lack of a basic sense of solidarity among European governments.

First, it was the pandemic. Then, it was the recovery fund and Brussels didn’t want this to be a “trade-off” with Hungary’s anti-migrant leader Viktor Orbán. After a deal on the recovery fund was reached, the process has ended up on the backburner once again, in large part because of the standoff between EU and Turkey.

Will we ever be able to explain to the 4,000 refugee children currently in the Moria camp what happened and why? Probably not.

We can only hope that things will quickly change for the better.

Failing that, we hope they will someday be able to read about the biggest supporter of Europe’s return to Christian roots, Viktor Orbán, who is also the biggest opponent of migrants.

But for now, he and the other little ‘Orbáns’ are safe in the EU’s centre-right shelter.

A message by amfori: Join the amfori Unleash Opportunity Digital Conference – 24  September. At amfori, we believe that Trade with Purpose brings economic, social and environmental benefits for all. Join us on September 24th  for our Unleash Opportunity Digital Conference. We have two engaging sessions, with speakers from the world of government, business and civil society, do not miss it!

The risk of climate change and the spread of infectious diseases are seen as the top threats by the majority of people in 14 economically advanced nations, a recent study by the Pew Research Center has found.

A broad spectrum of stakeholders have spoken out on EU plans to regulate the online ecosystem as part of its forthcoming Digital Services Act (DSA) package, with fierce jockeying over the extent to which the EU will introduce new rules for the digital economy.

EU leaders will ask the European Commission later this month to develop an EU-wide public electronic identification system (e-ID) to access cross-border digital services, according to the draft summit conclusions seen by EURACTIV.

For two years now, French association Pépite Sexiste has been fighting against gender stereotypes in advertising. It has now decided to go international and has even launched one of its subsidiaries in Germany called Servus Sexismus.

Pharmaceutical company AstraZeneca announced it has suspended global trials of its coronavirus vaccine, in a fresh setback for the global race to find a vaccine.

One response to “The Brief, powered by amfori – Moria burns, and solidarity with it”