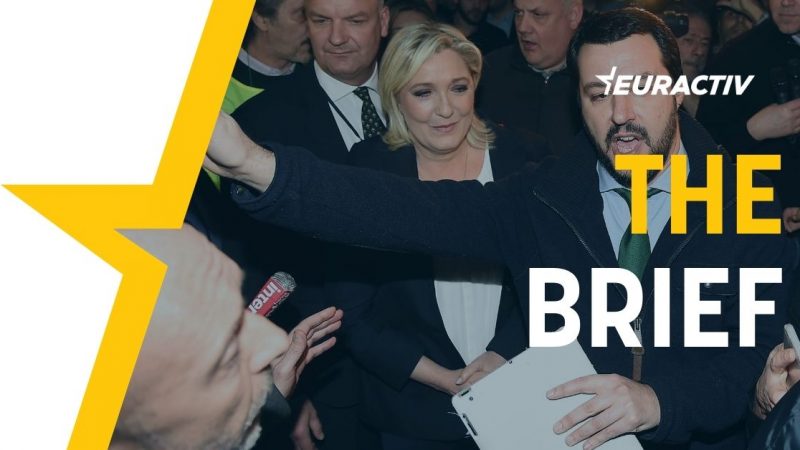 In the latest tweak to Europe’s political map, far-right parties from 16 EU countries, including France’s Rassemblement National, Poland’s PiS, Hungary’s Fidesz, and Italy’s Lega, united on Friday (2 July) with the aim of making themselves heard in the debate on the future of Europe.

The news may appear trivial at first glance, but it might yet prove a fateful move. We won’t know until we get a closer look at the parliamentary arithmetic.

At present, the Eurosceptic and far-right parties are part of two separate political groups in the European Parliament, the European Conservatives and Reformists (ECR) and the Identity and Democracy (ID) group.

Parliament’s largest group is the European Peoples’ Party (EPP) with 177 MEPs, followed by the Socialists and Democrats (S&D) with 147, the centrist Renew with 98, ID with 76 and ECR with 61.

But the 16 signatories of Friday’s letter are from ECR and ID, presumably adding them to the 13, currently free-floating MEPs from Hungary’s Fidesz, still unaffiliated to any political group since they left, or were forced to leave, the EPP.

ECR and ID haven’t always been on good terms in the past, as they tussled over the same potential support base in a bid to form their own political groups.

Take Italy for example. The far-right Brothers of Italy are currently in the ECR and until now were against Italian rivals Lega joining, leaving Salvini’s party to join ID instead.

However, in signing Friday’s unifying document, these divisions appear to have suddenly been forgotten: Georgia Meloni put her name to the same piece of paper as Matteo Salvini.

Among the other signatories, the French, Austrian, Belgian, Danish, Estonian, Finnish parties are from ID, while the Polish, Spanish, Bulgarian, Greek, Dutch, Lithuanian and Romanian signatories are from the ECR.

Imagine for a second that ECR and ID officially joined forces, adding to their number the homeless MEPs from Viktor Orbán’s Fidesz. Such a potential group would boast 150 MEPs, making it the second largest in Parliament.

It would be a powerful force, holding significant sway over agendas, tabling motions for resolutions or amendments to reports, and being given speaking time for its leaders at the beginning of debates, rather than at the end.

If the Eurosceptic and far-right forces join forces to push forward a Eurosceptic, nationalistic and homophobic agenda, it makes sense that they would launch a new group in order to grasp all the instruments of power.

Whether this is a likely outcome is another question altogether.

In general, Europe’s far-right parties have a lot in common, including a natural aversion towards working together. Even Steve Bannon was unable to unite them during the Trump presidency, in a political climate that was much more favourable.

In European politics, it takes a combination of power apparatus, patience and time to achieve the minimum integration needed to push forward a common agenda. This author doesn’t think that the 16 signatories of the letter are equipped for anything like that.

The French National Assembly adopted a bill to combat separatism which includes several obligations for online platforms featured in the EU’s Digital Services Act (DSA) for which debate has just started. According to the Commission, such fragmentation poses a “risk to the single market in digital services and to Europe’s prosperity”. EURACTIV France reports.

Germany’s largest refinery hosts the largest electrolyser of its kind in Europe, built by Shell and the EU. Shell is already looking towards building an electrolyser ten times larger by 2024 with the aim of supplying industry in Germany with hydrogen.