The F-word: Why feminism needs to guide EU’s foreign policy into the 21st century 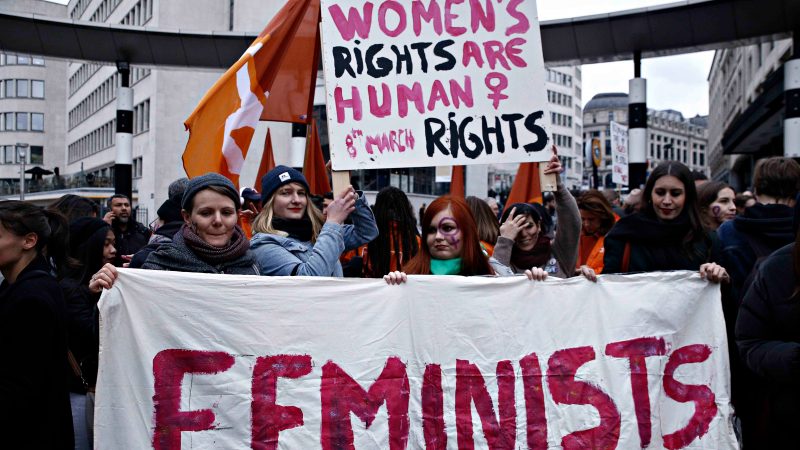 3.8 billion. That’s how many women and girls there are in the world. Zero: that’s the number of countries set to achieve gender equality by 2030. This week, on Women’s Day, people all over the world will stand up for women’s rights, writes Hannah Neumann.

Gender parity is a question of fairness. And it helps make the world a safer place.

Research shows that the more gender-equal a country the less prone it is to get involved in international conflicts. Including women in peace negotiations increases the success of peace negotiations: If they make it to the negotiation table at all, the resulting agreement is 35% more likely to last at least 15 years.

Shouldn’t pushing for women’s rights in external relations then actually be a no-brainer?

The EU has recognised this often enough – in rhetoric. For example when adopting its strategic approach to women, peace and security in December 2018.

The new Commission president Ursula von der Leyen put gender equality as one of the priorities in her “Political guidelines”, and the Commission promised to “put forward an Action Plan on Gender Equality and Women Empowerment in External Relations” in its Work Plan. When it comes to concrete steps, however, the EU is, as of now, falling short.

Pinkwashing of projects does not get us closer to real equality

Let’s take, for instance, the European Commission’s target to promote gender equality across 85% of its development projects by 2020. At first glance, this looks like a great initiative. Unfortunately, too often the gender dimension gets reduced to a mere tick box within the project proposal.

But pinkwashing of projects does not get us one step closer to real equality. If the Commission is serious in its efforts, it should stipulate the streamlining of gender throughout the entire project cycle.

Even more devastating is the situation regarding the EU budget for 2021-2027: Gender equality has been completely omitted in the forthcoming framework, which also includes money spent for external action.

According to a report by the European Parliament, clear gender equality goals, requirements and indicators in the proposals on the relevant EU policies are entirely missing in the MFF. Putting the money where the mouth is? At present, the EU gives a weak performance.

Money is one thing when it comes to gender equality, representation is the other. Even though women play such a decisive role for lasting peace, they made up only 13% of negotiators in major peace processes from 1992-2018, only 4% of signatories and – only 3% of mediators.

That’s reason enough for the EU to advocate for including more women in peace processes. But do we lead by example?

The EU needs to practice what it preaches

The European External Action Service (EEAS) does not cover itself in glory in this regard. Even though its staff is made up of 47.4% women and 52.6% men, the glass ceiling is still firmly in place: In the highest pay grades women account for only 12% of employees, and when it comes to the director level, their number is marginal.

At the European Union Military Staff (EUMS), it is a similar story: Only 22 out of 176 employees listed in the personnel directory are female, and of those, 12 serve as secretaries or assistants. The lack of female bodies in the military Common Security and Defence Policy (CSDP) does not help, either.

The European Commission’s newly created Directorate-General for Defence Industry and Space shows a similar picture: Both the Director-General and his deputy are male.

Finally, there’s the issue of the EU Delegations. EU’s Foreign policy chief High Josep Borrell appointed four new Heads of Delegations last August. All of them were male, including for crisis-shaken Ukraine and Yemen. And the new deputy secretaries-general, also appointed by Borrell? All men.

Report on Feminist Foreign Policy to be voted in October

At the moment, the EU’s external action is letting women and girls down. But how can we ask other countries to improve their track record on women’s rights if the EU’s foreign and security policy is mostly in the hands of men?

Credibility surely cannot be generated in this way. And good foreign policy can’t, either. What we need is a truly feminist foreign policy: a policy that puts women and girls and diversity at the heart of external action. Sweden adopted its Feminist Foreign Policy in 2014, and since then, other countries such as Canada, Mexico and the UK have followed suit.

In the year of the 20th anniversary of the UN Security Council Resolution 1325 on women, peace, and security, the EU as a whole now has the chance to do the same. That’s why the European Parliament is currently preparing a report on Feminist Foreign Policy.

Together with Spanish MEP Ernest Urtasun, I am responsible for this report, which will explain how the EU can better support women and diversity through its Foreign and Security Policy. 40,4 percent of MEPs are now women – the highest number in its history. This is a reason to celebrate.

But now, it is time for the European Parliament to show its support for women by voting for a strong report on Feminist Foreign Policy in October.

“A feminist foreign policy recognises that democracy, peace, prosperity and social progress need the full participation of women”, according to Melanne Verveer from the Georgetown University’s Institute for Women, Peace & Security.

EU leaders need to understand that and put women’s rights at the top of their foreign policy agenda.