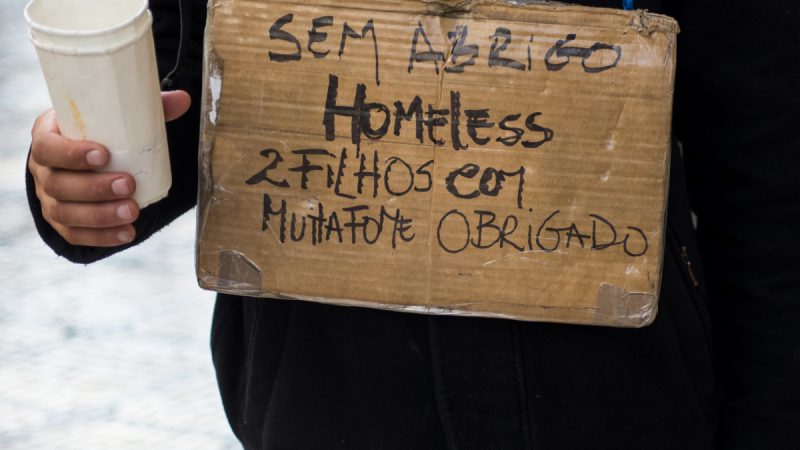 “The number of people at risk of poverty increased from 1.7 million in 2019 to 1.9 million in 2020,” says the report prepared by Nova School of Business & Economics in Lisbon. [Shutterstock / NeydtStock]

The risk of poverty increased from 16.2% to 18.4% between 2019 and 2020, according to provisional data from Statistics Portugal (INE) reaching almost two million people and with increases among women, the elderly, and families.

The at-risk-of-poverty rate increased by two percentage points, according to information in the report “Portugal, Social Balance 2021 – A portrait of the country and a pandemic year”, presented on Tuesday, based on preliminary data from the Income and Living Conditions Survey (ICOR).

The data collected in the ICOR is based on the financial and professional situation of Portuguese families in 2020, thanks to which “it is possible to briefly describe the impact of the pandemic on the living conditions of families”, starting with the fact that the at-risk-of-poverty rate after social transfers rose during the first year of the pandemic.

This at-risk-of-poverty rate increased most among women, people over 65, and all types of families, “especially in families with children”.

Within families, the biggest increase was among single-parent families, which experienced a 4.7% rise in poverty to 30.2% during 2020.

“The at-risk-of-poverty rate before social transfers also decreased compared to 2018, reaching 42.4%. As in 2018, the poverty incidence rate is higher among the unemployed, single-parent families and less educated individuals,” the report reads.

Concerning the elderly, the report points out that the at-risk-of-poverty rate of 17.5% is 2.3% above the national average.

The report also found that one of the determinants of poverty is the relationship with the labour market, highlighting that one in three unemployed people are poor. In some cases, working is not enough to escape poverty since one in 10 employed people are considered poor.

The social portrait also shows an unequal country, with the Azores remaining the region with the highest rate of poverty risk (28.5%), the Algarve and the North have the highest rate of severe material deprivation (6.7%), while the highest salaries are centred in the coastal region, especially in the metropolitan area of Lisbon, Centre and North.