Croatia and Serbia, a love-hate relationship 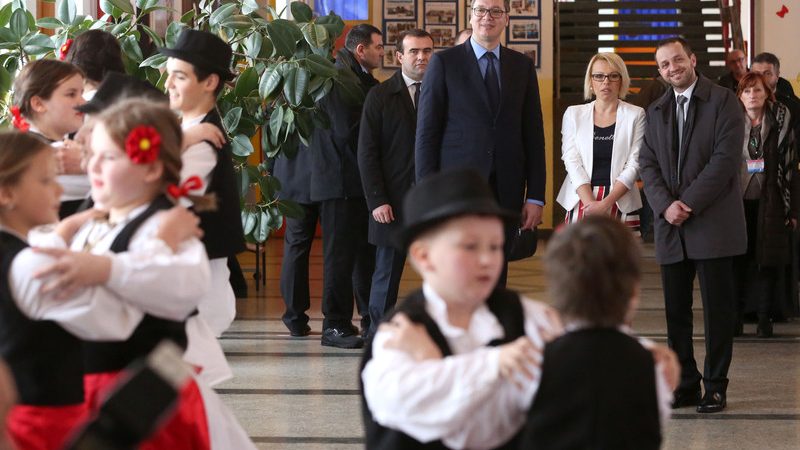 Serbian President Aleksandar Vucic (C) is accompanied by unidentified Croatian officials as they watch a group of children performing a folk dance during his visit to an elementary school in the town of Vrginmost, Croatia, 13 February 2018. [EPA-EFE/STRINGER]

Croatia demanded an apology from Serbia on Thursday after a member of a Serbian delegation referred to Knin – a town in the Adriatic hinterland that had been the seat of the Serb rebellion in 1991 – as “Serbian and occupied” and expressed hope that the Serbian flag would again fly over it.

During a visit to the Serb communities in the Šibenik-Knin-County on the day of a Serbian religious holiday, humanitarian worker and theologian Miloš Stojković – part of a delegation led by the state secretary of the Serbian ministry of state administration and local self-government – filmed a video in which he greeted his friends from the “occupied Serbian territory” while climbing the Knin fortress that overlooks the town.

Meanwhile, officials of the Serbian Embassy in Croatia handed over on Thursday two of a total of 25 housing containers from a private donation to the earthquake response team in the village of Lekenik, central Croatia.

“After this stressful event which affected the Sisak-Moslavina county, people in Serbia reacted with great empathy regarding everything that occurred and so the Serbian government, at the proposal of the president, was among the first to decide to make a donation, giving Croatia €1 million in emergency aid for the earthquake victims,” said chargé d’affaires Davor Trkulja.