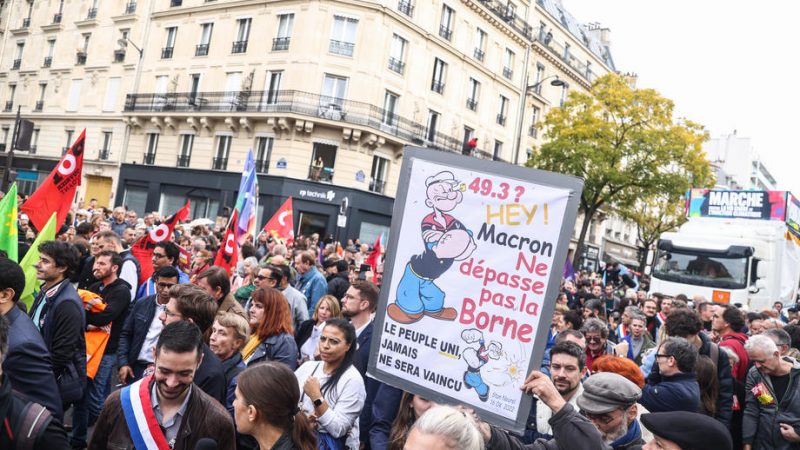 With inflation up 5.8% in October year-on-year, energy bills rising and the cost of food expected to reach 12% by the end of the year, according to France’s official statistics body, French unions have chosen to do what they do best: strike. [EPA-EFE/MOHAMMED BADRA]

A general strike is set to bring the country to a standstill on Tuesday, in a show of unions’ strength that will be scrutinised by all, but It remains to be seen whether this is the start of a movement like the “Yellow Vests” or just a publicity stunt.

With inflation up 5.8% in October year-on-year, energy bills rising, and the cost of food expected to increase by 12% by the end of the year, French unions have chosen to do what they do best: strike.

Refineries and oil depots have been blocked by workers since 27 September, who demand higher wages (up 10%). Many have criticised energy providers TotalEnergies and Esso-ExxonMobil for their “windfall profits”, asking for their fair share. TotalEnergies, for example, made €10.37 billion in the first half of 2022 as fuel prices soared.

A general strike, beyond the fuel and energy sectors, was announced late on Thursday (13 October) after the government decided it would make striking staff work to ensure fuel distribution in gas stations for emergency services.

This was a “bullsh*t” move, according to the left-leaning CGT union leader Philippe Martinez.

Earlier in the month, he told EURACTIV in an exclusive interview that he had “warn[ed] the government” over risks of social unrest – but the government had remained unresponsive.

During the last week, at least five unions have joined the call for a general strike, due to hit the public sector, the energy and transport sectors the hardest on Tuesday.

To some, such a mobilisation indicates growing anger towards the government, deemed inadequate to deal with worsening economic outlooks.

“The government underestimated general anger; workers are not being taken seriously,” Martinez said on public radio on Monday.

During a Monday debate at the National Assembly, communist MP Nicolas Sansu warned of “the risk of grave social movements that put our democracy at risk.”

Even far-right leader Marine Le Pen contended that “the situation is a catastrophe,” making the case that the government had failed to handle the rising energy cost effectively, and calling for a VAT cut from 20% to 5.5% on various energy sources.

This has led to some drawing a parallel between the current situation, which all started with increased energy costs, and the ‘Yellow Vests’ movement, which first emerged in late 2018 over a fuel tax hike.

According to Camille Defard, a European politics researcher at the Jacques Delors Institute, the issue with 2018’s tax hike was its all-encompassing nature: it impacted all equally, rather than applying proportionally to revenues.

“The cause of the Yellow Vests is the lack of considering inequalities in public policies more than the decline in purchasing power,” she told EURACTIV.

But she does not see a Yellow Vests movement coming back at French or European levels yet.

An opinion poll released on Sunday further found that a “protest arch” going from the far left to the far right is slowly building, for whom the shared culprits are corporations and the government.

All parts of this arch share a similar diagnosis of distrust in the institutions – though they do not have shared demands.

Furthermore, the striking unions represent a minority of workers, and the majority CFDT union has struck an agreement with TotalEnergies for a 7% wage increase, taking more momentum away.

Additionally, people are getting tired. Two-hour queues have been spotted all around the country for over three weeks. Cost per litre increased by 12 cents last week, with 7 cents for diesel, a BFMTV analysis found.

A general strike on public transportation (including short and long-distance trains) is expected to further strain people’s commutes.

According to an opinion poll revealed on Monday, 38% blame the CGT for not being lenient enough, while 34% argue the fault is on TotalEnergies. “It is the problem with strikers in the transport industry: they piss off those they claim to be defending,” vocal extreme right MP Jean-Philippe Tanguy told France Inter on Saturday.