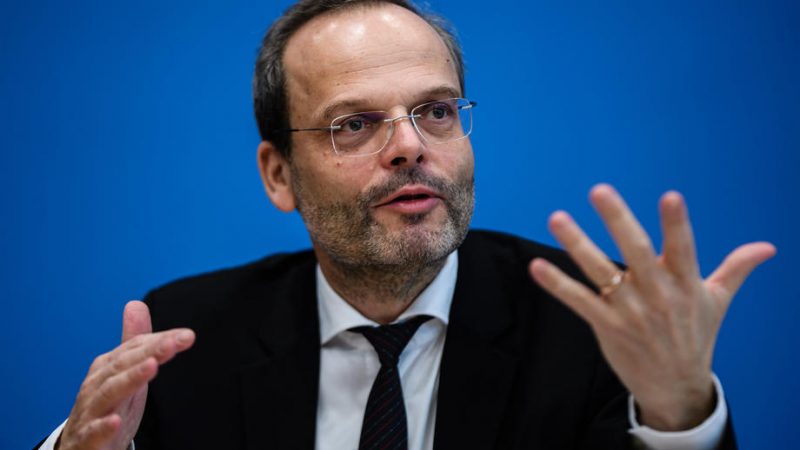 Federal Government Commissioner for Jewish Life in Germany and the Fight against Anti-Semitism Felix Klein gestures during a press conference on Radicalization and Normalization - Danger from Anti-Semitism and Corona Denial Scene Grows at the Bundespressekonferenz building in Berlin, Germany, 24 November 2020. [EPA-EFE/CLEMENS BILAN]

The German government’s antisemitism commissioner Felix Klein sharply criticised on Tuesday the coronavirus-sceptic protesters, who had been comparing themselves to Anne Frank or anti-Nazi activist Sophie Scholl.

“The increasing comparisons of protesters against the coronavirus measures with victims of National Socialism mock the actual victims and relativise the Shoah,” Klein told Redaktionsnetzwerk Deutschland (RND) in an interview.

“The Holocaust is not a badge for any kind of victim feelings. […]  Anyone who knows a lot about Anne Frank and Sophie Scholl will hardly be making such crude trivialisations,” he added.

A woman who identified herself as ‘Jana from Kassel’ gained particular infamy over the weekend for comparing herself to Sophie Scholl in a speech at a demonstration protesting coronavirus restrictions in Hanover. Scholl was executed by the Nazis in 1943 – along with her brother and a friend – after they were found distributing anti-war leaflets.

Klein was also heartened by public outrage against these types of trivialisations, saying “the fact that the criticism of such comparisons is now making a big splash is something I very much welcome. It testifies to a functioning value system of the democratic majority.”