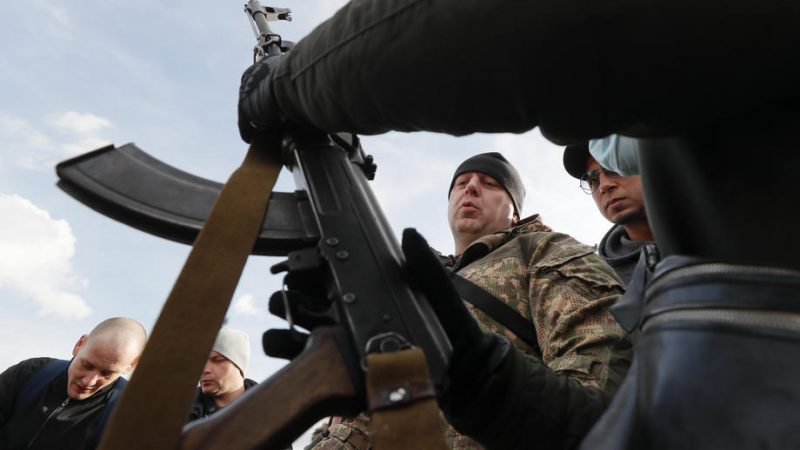 Ukrainians are explained the handling of weapons during an open military training for civilians organized by Right Sector activists in Kiev, Ukraine, 20 February 2022. [EPA-EFE/SERGEY DOLZHENKO]

After Russia’s attack on Ukraine, calls to reconsider delivering defensive weapons to Ukraine have emerged in Germany. The government, however, seems unlikely to change tack despite the fact the previously promised assistance still has not been delivered.

“I was against arms deliveries in order to keep channels of communication with Moscow open. That’s over for now. What matters now is defence,” Norbert Röttgen, foreign policy specialist from the conservative opposition party CDU, said on Twitter.

“Whatever weapons we can provide, we must deliver to Ukraine,” he added.

But statements from government officials throughout the day made it sound unlikely that Germany would move away from its decision to refuse arms deliveries, at least in the short term.

The government parties would consider the recent developments during its planned revision of the arms export control law, Green Foreign Minister Annalena Baerbock said on public TV. “But for now, we need to focus on short-term measures,” such as diplomatic and humanitarian help, she added.

Clearer words came from Baerbock’s party colleague, Vice-Chancellor Robert Habeck. Even after Russia’s invasion of Ukraine, Germany will not deliver weapons to Ukraine, he said.

Representatives of the other government parties, the Liberals and the Social Democrats, made similar statements. Chancellor Olaf Scholz, meanwhile, did not address the question in his various statements throughout the day.

At the same time, there are doubts about whether arm shipments would still help even if they were greenlighted now. “If we had wanted to deliver weapons, we would have had to do that earlier,” CDU vice-party whip Johann Wadephul said. “Now, this is not possible anymore – we have an ongoing war,” he added.

The only military aid Germany promised to send Ukraine was a shipment of 5,000 helmets which still have not yet been delivered.