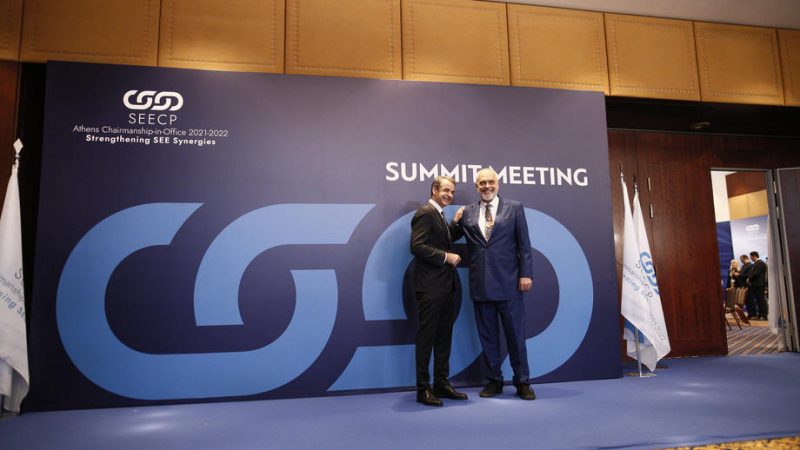 In 2009, the two countries agreed to delimitate the continental shelf in the waters between them, but Prime Minister Edi Rama, at the time in opposition, took the matter to the Constitutional Court. [EPA-EFE/ACHILLEAS CHIRAS]

Albania and Greece did not agree on the issue of maritime borders between the two countries, despite both prime ministers meeting on the sidelines of the European political Community in Prague on Thursday.

In 2009, the two countries agreed to delimitate the continental shelf in the waters between them, but Prime Minister Edi Rama, at the time in opposition, took the matter to the Constitutional Court.

He argued the agreement gave Greece some 225 square kilometres of Albanian waters. The court agreed, and relations became soured between Athens and Tirana. Since Rama took power in 2013, the issue is yet to be resolved, and it was announced in October 2021 that the matter would go to an international tribunal.

Rama said that no consensus was found and the matter would progress to the International Court in The Hague.

“This is a legal process, there are a number of rules, there are a number of procedures, and we will respect the procedures from the beginning to the end because we have to make our position very clear, we have to make it very clear what we intend in this process and that unified attitude required of this court as to what one side intends and what the other side intends, requires its own time. So we don’t have a consensus between the parties”, said Rama.

In 2011, leaked diplomatic cables from the US claimed that Greece blackmailed Albania into accepting an unfavourable deal, using Athens’ veto over EU enlargement. Greece has publicly made similar suggestions over the unresolved Cham issue.

At the first meeting of the European Political Community, Rama announced that the countries of the Western Balkans would be part of the discussion with the European Union to face the energy crisis.

“In the round table where I was together with the Prime Minister of the Netherlands, the main focus was precisely the energy crisis and how our countries, starting with those negotiating membership, will be able to be helped directly. While I have insisted that there should be no difference here and all countries should be included, all six countries”, emphasising previous calls for EU assistance amid soaring prices.