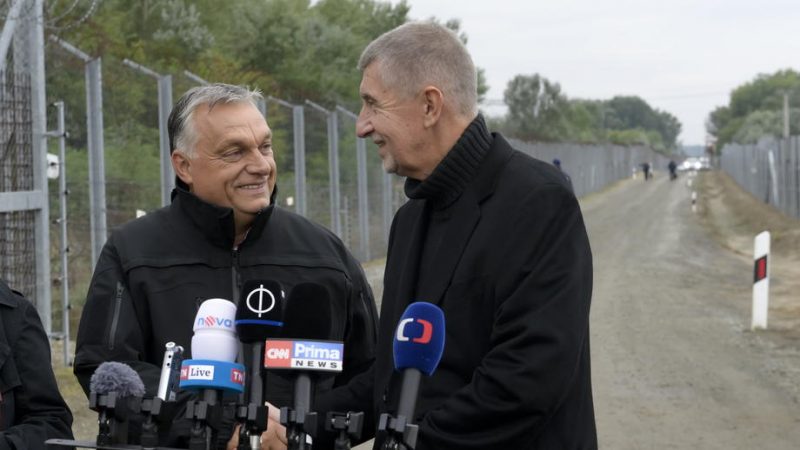 “Babiš’s defeat will weaken the link between Prague and Budapest. This can further undermine the Visegrad cooperation as we currently know it" said Zdeněk Beránek, director of EUROPEUM think tank. [EPA-EFE/Szilard Koszticsak]

Hungarian Prime Minister Viktor Orbán is heading to Czechia next week to endorse his Czech counterpart Andrej Babiš ahead of the Czech parliamentary elections set for 8-9 October. But leaders from Europe’s liberal Renew group to which Babiš ‘s ANO party belongs have remained silent.

The Hungarian and Czech lawmakers have been the closest allies for years, with Babiš even dedicating a whole chapter to Orbán in his recently published book.

The Czech PM admires his Hungarian counterpart for his housing and family-friendly policies and often emphasises their common fight against the EU’s refugee relocation mechanism.

Babiš paid a visit to Hungary to meet Orbán and see security management at the border between Hungary and Serbia. The two used this opportunity to criticise the EU for insufficient protection of the EU’s borders.

So far, Babiš did not get support from any other European leader except from Orbán. Even the Renew Europe group in the European Parliament, with which the PM’s ANO party is affiliated, did not show support for his candidacy.

“It is an internal issue, Renew respects national elections and has no need to comment on that,” an EU source close to European liberals told EURACTIV.cz.

Renew is also silent about Babiš’ conflict of interest, recently confirmed by the European Commission’s audit report. Although Renew MEPs refrain from commenting on the matter, a majority of them voted in June for a resolution condemning his activities.

EURACTIV was informed that strong ties between Babiš and Orbán are causing headaches to several Renew group members. While Babiš’ scandals are sidelined within the group, liberals are vocal critics of Orbán, condemning his “putinisation” of Hungary.