Serbia will have preferential regime in Russia’s ruble demand 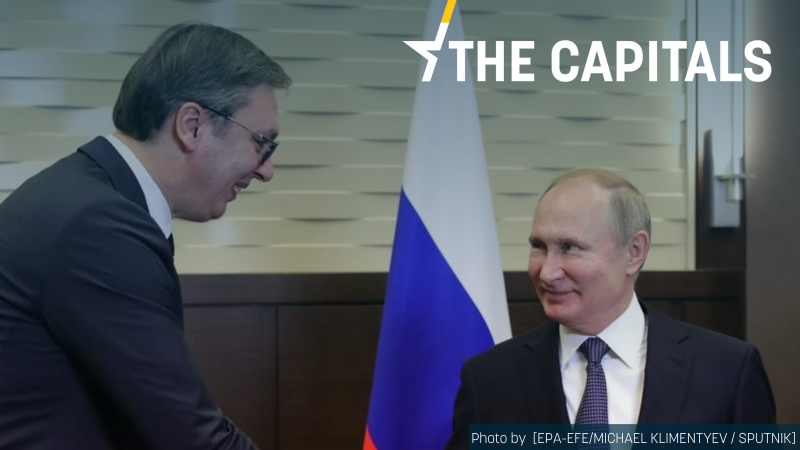 In response to Western sanctions due to the war in Ukraine, Russian President Vladimir Putin said Russia would start selling gas to “unfriendly” countries in rubles. Serbian President Aleksandar Vučić stated earlier that paying for Russian gas in roubles would pose a problem. [EPA-EFE/MICHAEL KLIMENTYEV / SPUTNIK]

Moscow will try to solve the situation of Serbia paying for Russian gas in rubles, Kremlin spokesman Dmitry Peskov stated on 24 March. Meanwhile, a statement by Serbian parliament speaker has triggered strong reactions from Ukrainian embassy in Belgrade.

In response to Western sanctions due to the war in Ukraine, Russian President Vladimir Putin said Russia would start selling gas to “unfriendly” countries in rubles. Serbian President Aleksandar Vučić stated earlier that paying for Russian gas in rubles would pose a problem.

Peskov told reporters, “He is right – that truly can be a problematic situation.”

Citing Bulgaria as an example, he said Sofia had acted “in a hostile manner” towards Russia, adding that they would have to pay for Russian gas in rubles, “whether they like it or not”.

“However, that does not apply to Serbia. That is a problem that needs to be solved, and Serbia’s concerns will be a priority for us,” Peskov said.

EU hopeful Serbia has condemned Russia’s aggression in Ukraine under pressure from the West, but has failed to continue the rhetoric at home. In addition, they have failed to align with EU foreign policy by imposing sanctions. For example, as Europe closed its air space to Russian planes, Serbia increased the number of flights between the two countries until just last week, when they reduced them following criticism.

Reuters reported that following Putin’s decision, Europe’s energy sector is already witnessing supply concerns. The benchmark price for German delivery next year is up 8% since Putin’s remarks, after already quadrupling over the last 12 months.

European customers are, therefore, facing a dilemma: don’t pay in rubles and risk getting no gas or comply and risk higher prices as contracts get renegotiated, and more favourable long-term deals are jettisoned.

EURACTIV was informed that the issue will not be discussed at the EU summit considering that EU capitals still do not know the impact. An assessment is currently taking place at the EU level, a source close to the matter told EURACTIV.

Meanwhile, Socialist Party leader and speaker of the Serbian parliament Ivica Dačić told Happy TV that there was no dilemma whether Serbia was on Russia’s side and cited an opinion poll claiming that 6% of citizens were on Ukraine’s side and 40% on Russia’s.

The statement triggered the reaction of the Ukrainian embassy in Serbia who described it  as “immoral political manipulation”.

“We are confident that this politician is allowing his imagination to run wild. What is true is that the Serbian people, who having a long tradition of fighting for freedom, cannot a priori support the actions of the enraged regime of (Russian President Vladimir) Putin who is a modern reincarnation of Adolf Hitler’s Nazi regime,” the Ukrainian embassy said in a statement.

The embassy finds “absolutely immoral attempts to force upon ordinary people in Serbia support for the murder of Ukrainian children, bombing of schools, hospitals and maternity hospitals and demolishing cities and in this way tarnish the honour and dignity of the brotherly and freedom-loving Serbian people.”

Yesterday in Belgrade, another pro-Russia demonstration took place with protestors holding banners saying “Crimea is Russia” and “Kosovo is Serbia”. During a previous protest, people waved Russian flags and threw EU flags on the ground.

Meanwhile, Kosovo’s Prime Minister Albin Kurti has been vocal in warning against Serbia’s ties with Russia, stating it risks the stability and security of the region.

“The Soviet Union has transformed into an octopus, with the Russian Federation at its centre and its tentacles extending in Donbas, Crimea, Transnistria, South Ossetia […] The former Yugoslavia is an octopus with Serbia at its centre, a Serb entity in Bosnia, a Serbian [political] subject in Montenegro that doesn’t recognise the independence of the country, and the illegal structures in the north of Kosovo,” Kurti stated.

Another EU candidate country that will not impose sanctions against Russia is Turkey. The country, like Serbia, has kept its airpsace open for Russian planes.

Although the European Parliament firmly criticised Serbia for not harmonising with  EU sanctions, they have remained silent when it comes to Ankara.

Referring to Turkey, Greek Prime Minister Kyriakos Mitsotakis warned at the NATO summit on Thursday that all allies should adopt a common line on sanctions.

“I believe that the package of sanctions that we have imposed is strong. I believe that now we need to focus on avoiding ‘leaks’ in the implementation of sanctions, that all countries that are members of this alliance participate in sanctions,” the Greek leader said.