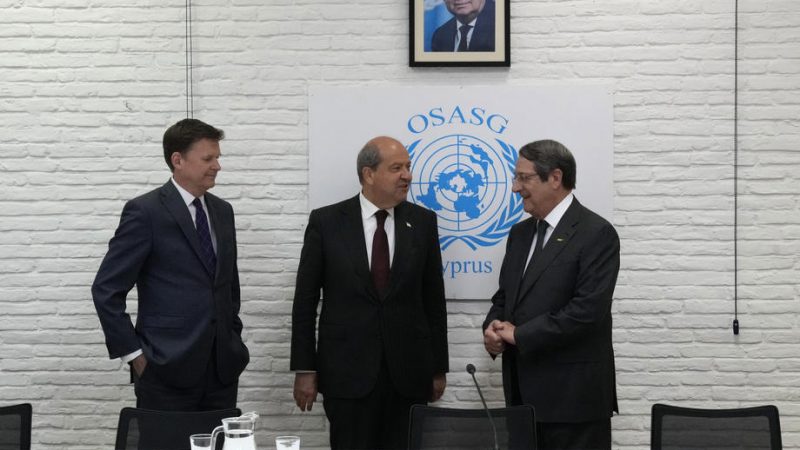 There is currently a political deadlock over the Cyprus problem – an ongoing dispute between Greek Cypriots in the south and Turkish Cypriots in the north. [EPA-EFE/PETROS KARADJIAS]

On Thursday, Stewart participated in a panel discussion on “Inclusion: Unleashing the Power of Diversity” at the Cyrpus Forum, which was organised by the Delphi Economic Forum in cooperation with the non-profit; Oxygono.

“I don’t think this impasse is necessarily insurmountable in the medium term, but realistically I don’t see much prospect for talks before the upcoming elections on the island and in the region next year,” the UN official said

“After those elections, we may find ourselves in a new context, better or worse. It is impossible at this point to predict,” he added.

Stewart added that “while there is an unfavourable prospect of talks soon, there is something far more fundamental at stake at this moment.”

“I am extremely concerned that the option of a mutually agreed settlement of the problem – in other words, a formula for reunification of the island acceptable to both sides – is ‘fading away’ and will not be available for much longer,” he added.

“Europe cannot be truly whole as long as Cyprus remains divided,” she said, adding that “the only way forward is to have a single, sovereign European state, a bi-communal, bi-zonal federation, in accordance with the UN Security Council resolutions.”

On the sidelines of the UN General Assembly in New York that ended 20 September, Turkish Cypriot leader Ersin Tatar, after meeting with UN Secretary General Antonio Guterres, stated that there can no longer be a federal structure on the island, that all negotiating processes have been exhausted and that negotiations for a two-state solution under equal rights must continue. Tatar noted that this issue should be raised in the UN Security Council.

On Wednesday, Turkish President Recep Tayyip Erdogan reiterated his call to the international community to recognise the so-called “Turkish Republic of Northern Cyprus”.