The ReFuelEU proposal is expected to require airlines to use a set percentage of low-carbon sustainable aviation fuels, such as e-fuels and biofuels, in their fuel mix. [Martin Winkler / Pixabay]

The European Commission will release the ‘ReFuel EU’ regulation in the coming weeks to help green flights, but some low-cost airlines worry the sector’s biggest polluters – long-haul flights – will be exempt from the requirement.

However, others argue that obliging intercontinental flights to include sustainable aviation fuels (SAFs) in their fuel mix will put EU carriers at a competitive disadvantage and lead to airlines minimising the amount of refuelling they do while in the EU.

The ReFuelEU proposal is expected to compel airlines to blend a set percentage of low-carbon SAFs – such as e-fuels and biofuels – with kerosene, in a bid to reduce emissions.

The European Commission is hoping that the regulation will increase the supply of SAFs and lower prices – which currently run far higher than kerosene – making it commercially viable for airlines already struggling with the pandemic-driven downturn.

While the airline industry is broadly welcoming of the upcoming regulation, the question of whether to extend the green fuel blending obligation to long-haul flights has seen stark divisions emerge.

Budget airlines such as Ryanair, easyJet, and Wizz Air argue that the SAF mandate should cover all flights departing from the EU, regardless of the destination.

“Cutting just a fraction of these long-haul emissions would reduce more CO2 than is emitted from all of Europe’s short-haul flights combined,” said Michael O’Leary, the CEO of Ryanair. “There is no logic in excluding long-haul flights from SAF usage obligations as this is their only possible way to decarbonise,” he said in a statement.

The low-cost carriers argue that as low-carbon aircraft technology such as electric and hydrogen-powered planes will only cover short-haul flights for the foreseeable future, long-haul carriers are most in need of the SAF mandate.

“We think cleaner disruptive technologies will come along and break the mould, as is happening with cars, for short distance flights,” said József Váradi, Group CEO of Wizz Air. “We should only keep old propulsion systems where there is no alternative, as is the case for long-haul. Global competition cannot be the perennial excuse for inaction,” he added in a statement. 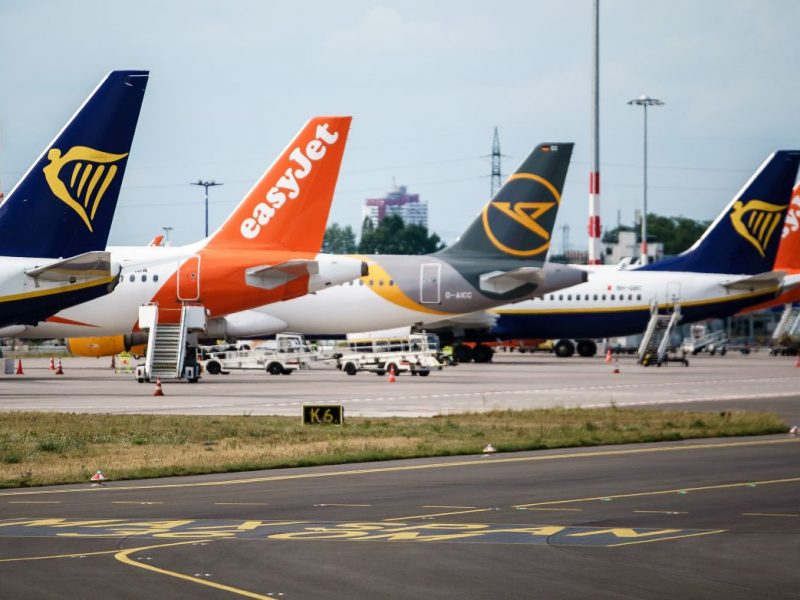 Ryanair, Easyjet and other low-cost airlines have written to the European Union asking that its plan to force carriers to use a certain share of sustainable fuels apply to all flights, not just short-haul ones.

However, the International Air Transport Association (IATA), which represents around 290 airlines globally, warned that applying the SAF mandate to intercontinental flights too quickly could have unintended consequences.

“If the EU unilaterally apply a SAF mandate on all flights to and from the EU before there is international consensus (ideally agreed at the UN’s International Civil Aviation Organization level) and before the price of SAF has fallen to a competitive level, it will create an unfair competitive advantage for non-EU carriers,” said a IATA spokesperson in an emailed statement to EURACTIV.

Rather, the airline body is in favour of applying the SAF mandate “to intra-EU flights only in the first phase, with a potential to be extended in a second phase” once greater international consensus on SAF uptake has been reached.

IATA cautioned that the mandate could “create unintended negative environmental consequences as airlines choose to tanker fuel over longer distances, leading to greater emissions,” referring to the practice in which aircraft store higher quantities of fuel to avoid refuelling at the airport.

The airline lobby compared the SAF mandate debate to the EU Emissions Trading Scheme argument, which saw similar battle lines drawn over the inclusion of inter-continental flights in the carbon pricing mechanism.

“That ended with the sensible decision to keep the Emissions Trading Scheme intra-EU only while a global carbon scheme – CORSIA – was put in place. We would hope the same situation happens for SAF, but without the diplomatic tension,” the spokesperson said.