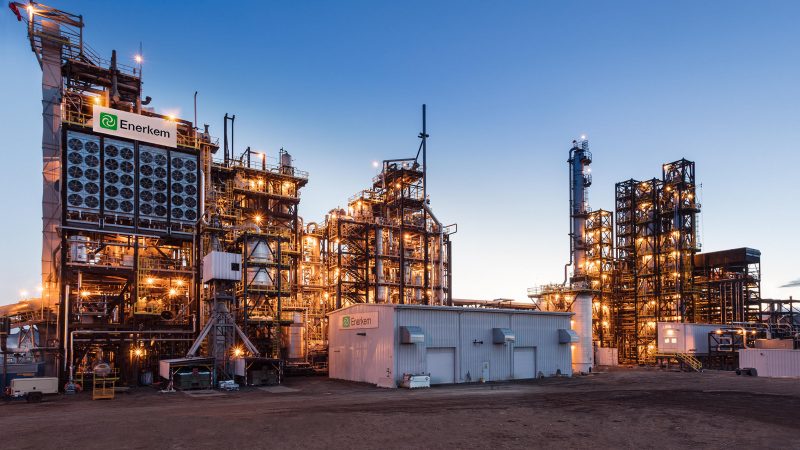 The Enerkem plant in Edmonton, Alberta in Canada

Ecoplanta, the waste recovery project in El Morell (Tarragona, Spain), has recently been preselected by the European Commission Innovation Fund for its contribution to the fight against climate change.  A joint venture between Repsol, Enerkem (Canada) and SUEZ Recycling & Recovery Spain, this project is one of only 7 preselected among over 300 other large-scale projects submitted from all of Europe.

The European Commission Innovation Fund supports highly innovative technologies for major European projects resulting in significant reductions in GHG emissions. Through this commitment, the European Union intends to support the promoters of highly innovative projects and to facilitate technology implementation. Ecoplanta relies on a unique molecular recycling technology designed by Enerkem and specifically distinguished for its feedstock & end products flexibility, its reduction of carbon emissions, compatibility with circularity and sustainability principles, and its scalability. Ecoplanta could be replicated in other geographies.

Ecoplanta will convert non-recyclable fractions of waste into circular chemicals and advanced biofuels, producing 237 kt/y of methanol in a facility on a petrochemical complex near the port of Tarragona, Spain and thereby recycling over 70% of the carbon present in the residual waste materials. Methanol will be used as a feedstock or building block for the production of circular materials or advanced biofuels under RED2, cutting GHG emission by an estimated 200,000 tonnes [Based on ISO 14064-2 standard] each year and recycling carbon that would otherwise end up in landfill. These renewable materials and advanced biofuels will offer a clear pathway for the industry to decarbonize transportation, shipping, and chemical sectors.

The Ecoplanta project is a ground-breaking illustration of the circular economy.  With its emphasis on maximizing carbon recycling from residual waste materials, Ecoplanta will contribute towards the Waste Framework Directive target for which recycling and re-use of municipal waste must reach 65% in Europe by 2035. These targets require a large shift in EU waste management practices, where currently only around 40% of municipal waste is recycled, and 30% is still landfilled. Ecoplanta provides a clear pathway towards the achievement of these targets.

In its essence, the project will accelerate the transition from a linear resource-based economy to a circular economy, which is one of the most pressing economic, political, and social challenges of our time.

A SUSTAINABLE AND DISRUPTIVE INDUSTRIAL PROCESS

The project will use a disruptive technology designed by Montreal (Canada) based Enerkem, one of the three partners in the Ecoplanta venture which combines Enerkem’s technology leadership, Suez’s water & waste management expertise, and Repsol operational excellence and strong know-how of the industry, together with potential synergies among the future facility and its leading industrial complex in Tarragona.

This patented technology is an advanced thermochemical process (novel gasification) that chemically recycles carbon molecules contained in waste materials into added-value renewable products. It consists of transforming the solid waste materials into an ultra clean and usable intermediate called a synthesis gas, a building block from which the industry can bolt on proven industrial processes to synthesize specific molecules such as methanol, ethanol, sustainable aviation fuel, synthetic gasoline and ethylene. The process is conceived on carbon recycling as well as low carbon intensity principles, providing a clear scalable solution for the decarbonization of chemicals and fuels.

Enerkem’s technology complements conventional recycling options by focusing on reject fractions from conventional recycling processes. It addresses some present limitations in the closed-loop pathways due to mixing, degradation and contamination (which in the current plastics system is produced in high volumes) or of unfeasibly low volume (e.g. novel materials). The produced circular plastics products can meet highest performance specs and desired aesthetics just as fossil virgin-grade plastics.

Enerkem’s carbon recycling technology is well positioned in the waste hierarchy. In the Netherlands, for example, chemical recycling is officially recognised as Recycling in Dutch waste policy.

The Enerkem technology is currently at the heart of a number of other major industrial ventures centered on the production of renewable chemicals from different types of waste.

In Edmonton (Alberta, Canada), Enerkem Alberta Biofuels (EAB) has been recycling carbon from residual materials into methanol and ethanol since 2016.  It is the world’s first commercial-sized waste to biofuels and renewable chemicals facility.

In Varennes (Québec, Canada), VCR (Varennes Carbon Recycling), a partnership with Shell, Suncor, Proman, and Investissement Québec, has begun construction of a similar facility using Enerkem’s technology and know-how[2]. It will produce biofuels and renewable chemicals made from non-recyclable residual materials.

The Enerkem chemical recycling technology provides a sustainable solution for waste management and can contribute strongly to reach the EU’s objective of climate neutrality by 2050. The versatility of technology regarding feedstock and end products allows to build structuring projects adapted to the local context of each country.