Armenia’s Serzh Sargsyan was nominated yesterday (11 April) to be the country’s prime minister, days after he stepped down as president. On the same Azerbaijan strongman Ilham Aliyev secured a fourth consecutive term following an early election.

“At the session of its executive committee, the Republican Party took the decision to nominate Serzh Sargsyan for the prime-ministerial post”, party spokesman, Eduard Sharmazanov, told AFP.

“The nomination will be submitted on Saturday and the vote will take place on Monday,” he added.

The pro-Moscow veteran politician – who has already served as premier in 2007-2008 -concluded his second and final term as president after his successor Armen Sargsyan was sworn in on Monday. They are not relations.

Armenian media stress that the new president will have a mostly ceremonial role, with the real executive power vested in the prime minister.

Armen Sargsyan’s inauguration has allowed controversial 2015 constitutional amendments to come into force, turning the country into a parliamentary republic with a strong prime minister.

An Aliyev victory was widely seen as a foregone conclusion with the Caspian state’s downtrodden opposition unable to mount a serious challenge to his rule.

In power for 15 years, Aliyev received 86.1% of the vote, the Central Election Commission said in a statement, after 67.3% of votes were counted.

Aliyev’s position has been boosted in recent years by the steady influx of petrodollars into his government’s coffers.

Opposition parties in the tightly controlled Caucasus nation described the elections as a sham and accused the authorities of preparing to rig the vote.

They have also condemned Aliyev’s surprise decision to hold the election six months ahead of schedule, saying it was aimed at shortening the campaign period and hampering efforts to prevent vote-rigging.

It looks, however, that part of the motivation for moving the election forward was to ensure stability vis-à-vis arch-foe Armenia. Azerbaijan is technically at war with Armenia over the Nagorno-Karabakh region. 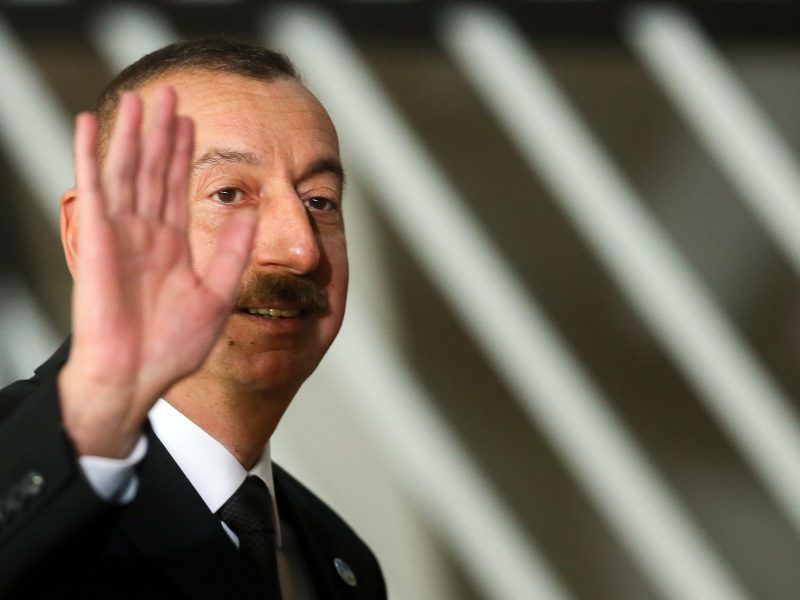 There is little doubt that the winner of the snap presidential election in Azerbaijan on Wednesday (11 April) will be its incumbent head of state, Ilham Aliyev. More interesting is the motive for such a move – which may well be the wish to counter the consolidation of power in arch-foe Armenia.

Ethnic Armenians backed by Yerevan seized control of Nagorno-Karabakh from Azerbaijan in the early 1990s, in a war that left an estimated 30,000 dead. The two sides never signed a definitive peace deal and all attempts to negotiate a final settlement have stalled.

In April 2016, at least 110 people were killed in Nagorno-Karabakh on all sides as the simmering violence escalated into the worst clashes in decades.