The last meeting of Aliyev [L] and Sargsyan over Karabakh was hosted by France in October 2014. [French Presidency]

The presidents of Armenia and Azerbaijan will meet on Monday (16 May) in Vienna to discuss the situation of Nagorno-Karabakh region following the worst clashes in two decades, mediators said yesterday (12 May). US and Russian diplomats are expected to be present.

Top diplomats from the United States, Russia and France, who are spearheading efforts to end the decades-long feud, are expected to participate in the talks aimed at strengthening a tenuous ceasefire hammered out by Moscow. No EU envoys will take part.

“A meeting between the presidents of Armenia and Azerbaijan is being planned for next week,” Russian foreign ministry spokeswoman Maria Zakharova said.

Later on Thursday, French Secretary of State for European Affairs Harlem Désir confirmed the meeting would take place on Monday.

The meeting between Azerbaijani President Ilham Aliyev and his Armenian counterpart Serzh Sargsyan will be their first face-to-face encounter since a surge in fighting last month that killed some 110 people and sparked fears of a return to full-scale war.

“In light of the recent violence and the urgency of reducing tensions along the Line of Contact, we believe the time has come for the Presidents of Armenia and Azerbaijan to meet,” said a statement from the OSCE’s so-called Minsk Group, headed by Russia, France and the US.

“Our foreign ministers are prepared to facilitate this meeting next week in Vienna.”

The meeting will aim to reinforce the ceasefire, build confidence between Yerevan and Baku and “create favourable conditions for resuming negotiations on a comprehensive settlement,” the Minsk Group said.

Azerbaijan and Armenia have been locked in a festering feud over the breakaway region of Nagorno-Karabakh after Armenian separatists seized the territory from Baku in a bloody conflict in the early 1990s.

The two sides never signed a definitive peace deal despite a 1994 ceasefire and have regularly exchanged fire across the volatile frontline, but last month’s violence represented an unprecedented spike.

Karabakh has declared itself independent, but it has not been officially recognised by any country, including its main backer Armenia, although reportedly Yerevan is preparing to pass legislation to recognise the independence of the territory.

Both sides have been rearming heavily in recent years and the sudden escalation in fighting saw the parties ramping up the rhetoric, accusing each other of fuelling the conflict.

Analysts have deplored the EU’s absence from efforts to defuse the tensions. Even Pope Francis plans visits to Armenia and Azerbaijan in an obvious diplomatic effort, while EU leaders have not made public such plans. 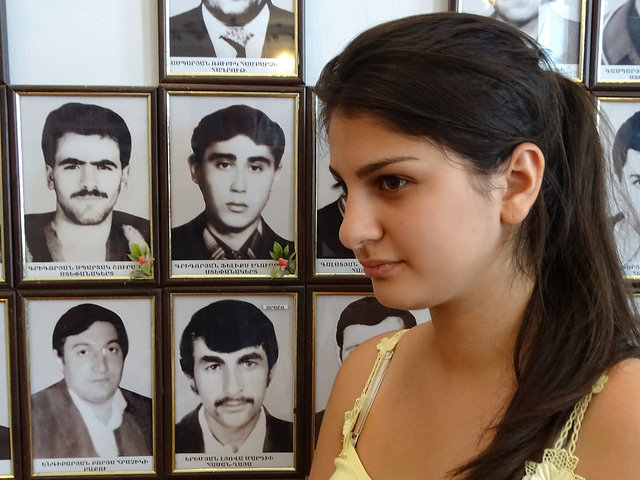 Pundits said on Monday (18 April) that the conflict between Azerbaijan and Armenia over Nagorno-Karabakh was potentially very dangerous, and complained of the EU’s absence from efforts to defuse the tensions.

Pope Francis will visit Azerbaijan and Georgia in the autumn, the Vatican said on 9 April, one day after combatants in Nagorno-Karabakh agreed to cease fighting that has killed dozens in the past week.

After the 4-day war in Nagorno-Karabakh at the beginning of April, we may see changes at the negotiating table, as Berlin has indicated it would like to take a stronger role, Amanda Paul, Senior Policy Analyst at the European Policy Centre (EPC), recently said.

Hrant Bagratyan, a former prime minister of Armenia, has claimed that his country has nuclear weapons. Armenia denied this, saying that Bagratyan, now in opposition, expressed his personal opinion.

Hrant Bagratyan, a former prime minister of Armenia, has claimed that his country has nuclear weaponry. The statement raises concern, as Armenia is technically at war with Azerbaijan, over the territory of Nagorno-Karabakh.