Armenia’s EU accession could be a ‘question for the people,’ Deputy PM says

Armenia has a “completely different level of relationship” with the European Union after last year’s revolutionary uprising, the country’s Deputy Prime Minister Tigran Avinyan has said, telling EURACTIV any future EU accession is a “question that the people of Armenia need to answer.”

Avinyan’s comments come just weeks after a bilateral meeting where the two sides explored ways of bringing Armenia closer to the EU, including easier visa procedures for Armenian visitors coming to Europe, and the conclusion of a Comprehensive and Enhanced Partnership Agreement (CEPA).

The country’s 2018 uprisings, dubbed the “velvet revolutions” due to their peaceful nature, comprised a series of anti-government protests in Spring 2018 which were led by Nikol Pashinyan, who is now the country’s Prime Minister.

EURACTIV recently caught up with Deputy PM Avinyan on the sidelines of the World Congress on Information Technology, which this year took place in Yerevan, to speak about the changing relationship between South Caucasus states and the EU.

“After the revolution, we have a completely different level of relationship,” Avinyan said. “The revolution affected those relations only positively because we share the same democratic values.”

Stuck in the middle

However, Avinyan is under no illusions about any immediate potential of EU accession for his country, telling EURACTIV that it is not a “topic for today”. However, with “the closening relations, there may be a future point in time when we have to address this question,” he added.

Currently, Armenia is part of the Russia-led Eurasian Economic Union, along with Belarus, Kazakhstan, Kyrgyzstan and Russia – providing for the free movement of goods, capital, services and people, alongside common policy agreements across sectors including agriculture, transport and energy. Armenia’s accession to the EEU came in January 2015. Militarily, Armenia is allied to Russia.

Meanwhile, Armenian relations with Brussels were boosted in July as part of Armenia’s adoption of the Comprehensive and Enhanced Partnership Agreement (CEPA) implementation roadmap, which provides for greater collaboration between the EU and Armenia – including annual EU grants for the country, offering support for judicial reforms, as well as giving Armenia access to EU research and development programs and giving financial backing to fight corruption.

For Avinyan, it is vital to maintain a diplomatic balance between Armenia’s involvement in the Russian-led EAEU and its ever closer ties with the EU.

“We see this balance as an opportunity, not only for Armenia, but also for the European Union and for Russia. We would like to keep this door open for both players.”

Indeed, any future Armenian accession to the EU would only come by way of an exit from the Eurasian Economic Union, says Dr. Stepan Grigoryan, Chairman of the board at the Analytical Centre on Globalisation and Regional Cooperation.

“Armenia’s EU accession in the future is only possible if the Eurasian Economic Union (EEU) doesn’t function and Armenia exits the EEU,” Grigoryan told EURACTIV. “Nevertheless, democratic values in the country are being strengthened following Armenia’s Velvet Revolution, effectively bringing the country closer to the EU.”

Moreover, ministers representing members of the Black Sea Economic Cooperation group convened on the sidelines of the World Congress of Information Technology in Yerevan last week, in a bid to support the rollout out of technological solutions in the region.

Moldova’s Economy Minister, Vadim Brinzan, said that IT companies are afforded the benefit of “separate tax environments” in his country, while Olga Memedovic, Chief of Business Environment Cluster and Innovation Division at the United Nations Industrial Development Organisation, said that “innovation cycles are becoming shorter” in the region, and generally the contingency of nations as part of the BSEC is going in the right direction with regards to the development of technology in the region.

Gregory Tsouris, Deputy Head of Cooperation for the EU delegation to Armenia, was representing the EU at the talks. And he rallied the benefits of the EU4Digital programme – a framework for extending the advantages of the digital single market to the Eastern Partnership states, which include Armenia, Azerbaijan, Belarus, Georgia, Moldova and Ukraine.

One such area of priority for the EU, Tsouris said, was that the Eastern Partnership states develop a common approach to roaming charges in the EaP region by 2020.

However, while the EU attempts to push for reforms to Armenia’s technology and communications landscape, the latter is trying to draw business away from the West in the technology sector.

One such field is taxation. In the EU, incoming Commissioners have signalled their commitment to the idea of establishing a digital tax, in a series of written answers to MEPs published recently.

However, Armenia takes a completely divergent stance on the issue of digital tax. Last week, Deputy Education Minister Arevik Anapiosyan told EURACTIV that the notion of a digital services tax in Armenia, in the form of an additional levy for online tech firms – was “definitely not a priority” for her country.

Moreover, Hakob Arshakyan, Armenia’s Minister of the High-Tech Industry, has a lot of faith in Armenia’s ability to attract some of the tech industry’s biggest players to his country.

“Big companies and multinationals who bring in innovative technologies always create an ecosystem around them…we are always open to having discussions with such firms.” 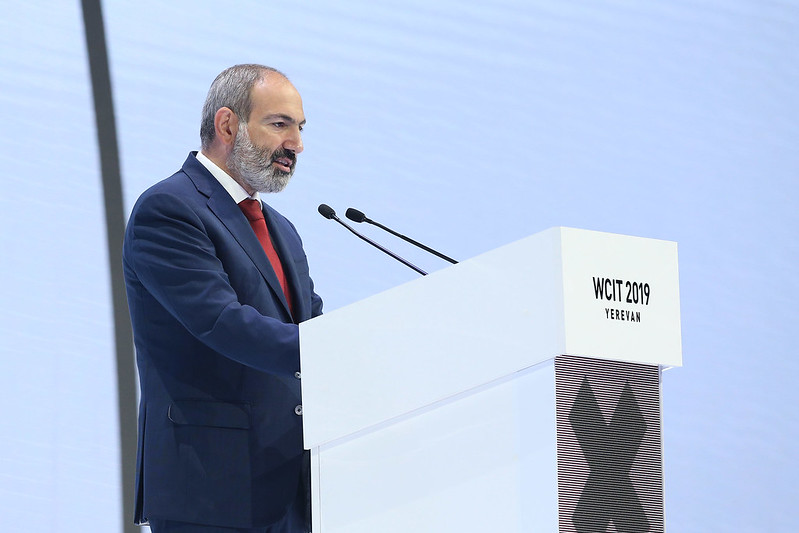 Armenia’s 2018 uprising has paved the way for a “technological revolution” in the country, Prime Minister Nikol Pashinyan said on Monday (7 October), as the Black Sea Economic Cooperation group rallied around the use of technology for regional collaboration.

However, Armenia’s overly-zealous approach to attracting talent from the tech world could come up against several challenges. One particular field is in the control of fake news in the country – one senior UN official told EURACTIV in Yerevan that the country is in the midst of an ‘information war’ with respect to fake news, particularly following the fallout after last year’s revolution, creating opponents of Prime Minister Pashinyan’s governing Civil Contract party.

EURACTIV took up the issue with Armenia’s IT Minister Arshakyan, who said that the country would never seek to limit the liberties of the free press. However, Armenian Prime Minister Nikol Pashinyan has reportedly told security services to crack down on the spread of disinformation online.

Speaking in April, Pashinyan said that on social media there have been “fakes” that operate under the “flag of revolution” with calls to violence. Pashinyan added that instances such as these should be responded to with “a very strong counterstrike.”