Protestors clash with police during an opposition rally against nomination of former Armenian president Serzh Sargsyan to the post of prime minister in Yerevan, Armenia, 16 April 2018. [Vahram Baghdasaryan/EPA/EFE]

Opposition leader Nikol Pashinyan — who organised the protest — said “tens of thousands” gathered in Yerevan’s Republic Square to denounce Sargsyan’s efforts to extend his chokehold on power after he stepped down as president last week.

Holding Armenian flags and chanting “Armenia without Serzh!” protesters filled Yerevan’s main square after lawmakers backed the candidacy of the Kremlin-supported veteran politician with 77 to 17 votes.

#Russia media still almost silent about protests in #Armenia. I think there is still no decision: is it American provocation from Washington Obcom or local thing 🙂

His second and final term as president ended last week.

The opposition denounced the vote — which made Sargsyan Armenia’s top leader under a new parliamentary system of government — saying the 63-year-old lacked popular support.

“Sargsyan lacks legitimacy and has earned the hatred of Armenians,” Pashinian told the rally.

Earlier in the day he announced “the start of a peaceful velvet revolution in Armenia,” and called on supporters to “paralyse the work of all government agencies.”

“We must not allow Armenia’s transformation into an autocratic country where the same man remains in power for an indefinite time,” 23-year-old student Karen Mirzoyan, told AFP at the rally.

Another protester, 38-year-old Roza Tunyan, said Sargsyan “lied to Armenians and broke his earlier promise not to become prime minister after his presidential term expires.”

#Armenia ??: This was #Yerevan today. 10.000s gathered to protest as former president #Sarksyan was elected as Prime-Minister by parliament.

Another country seems to be slipping back into authoritarianism pic.twitter.com/CGRg1LBdjE

On Tuesday morning, several thousand demonstrators marched through the centre of the capital Yerevan and staged sit-in protests outside government buildings.

They blockaded the entrances to about a dozen government buildings, including those housing the foreign ministry and the central bank.

Sargsyan blamed the opposition for the unrest.

“Extinct volcanoes should not wake up if we want to live in a prosperous Armenia, in a country with the rule of law. And volcanoes will not awake if no one provokes them.”

Rallies were also held in the country’s second and third largest cities of Gyumri and Vanadzor.

On Monday police used stun grenades as protesters sought to break through a barbed wire cordon in the centre of Yerevan in an effort to get to the parliament building.

With new waves of protests in #Armenia, the authorities have a chance to turn around their poor record on using excessive force. Any police response needs to be proportionate and in line with UN law enforcement standards, says @hrw https://t.co/fEBeEH8vjz pic.twitter.com/jRHP95Xk7B

The spokesman for the ruling party, Eduard Sharmazanov, has dismissed the protests as “the opposition’s artificial and fake agenda”.

Sargsyan, a shrewd former military officer who also held the office of prime minister in 2007-2008, has been in charge of the landlocked South Caucasus nation of 2.9 million since winning a presidential vote in 2008.

The country’s new president, Armen Sargsyan, was sworn in last week but his powers will be weaker under the new system of government.

Even though the two men share the same surname, they are not related.

The constitutional amendments were passed after a referendum in December 2015, with some 63% of the voters backing the changes.

After the plebiscite, thousands of opposition supporters rallied in protest against alleged mass violations at polling stations.

Council of Europe observers have said the referendum was marred by allegations of large-scale vote-buying and multiple voting, among other irregularities.

Opposition politicians say the shift to a parliamentary republic with a powerful prime minister has been designed to increase Serzh Sargsyan’s grip on power in the impoverished Moscow-allied country.

After Sargsyan was first elected in 2008, 10 people died in bloody clashes between police and supporters of the defeated opposition candidate.

He won a second presidential term in 2013. 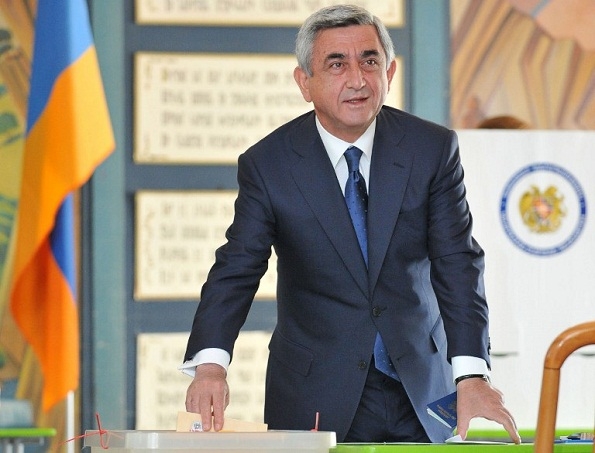