A woman gestures as police blocks a street during an opposition rally against nomination of former Armenian president Serzh Sargsyan to the post of prime minister in Yerevan, Armenia, 16 April 2018. [Vahram Bagdasaryan/EPA/EFE]

Around 6,000 gathered in Armenia’s capital on Monday (16 April) in protest at what the opposition calls a power grab by former president Serzh Sargsyan and several people were injured in scuffles with police.

Hundreds of opposition activists have held rallies in recent weeks to protest at Sargsyan’s campaign to become prime minister after a constitutional amendment approved in 2015 that transfers governing powers to the premier from the presidency.

Several people were injured in #Yarevan, including the leader of the movement "My step" (and leader of the whole protest) MP Nikol Pashinyan who was hospitalized. pic.twitter.com/dKJiMRFwTp

The number of protesters has grown to thousands in recent days with protesters blocking the centre of Yerevan, capital of the former Soviet republic.

A Reuters correspondent saw at least three protesters with blood on their hands and legs after scuffles broke out in the city centre. Local media quoted a hospital doctor as saying three policemen and one protester had been injured.

Another video of today's #protests in #Yerevan, #Armenia – via @dw_russian

Police warned demonstrators they would use tear gas and other means to disperse protesters if they did not leave the Opera House square and unblock the city centre.

#Armenia: Political opposition protests on the streets of Yerevan against Serzh Sargsyan's candidacy for Prime Ministry. Opposition figures have described as a "power grab". pic.twitter.com/8314hr4naU

The ruling Republican party nominated Sargsyan, who served as president for a decade from 2008, as its candidate for prime minister on Saturday.

Sargsyan’s ally Armen Sarkissian, a former premier and ambassador to Britain, was sworn in as president last week after being elected by parliament in a vote that was meant to herald the start of a power shift to the premier and parliament. 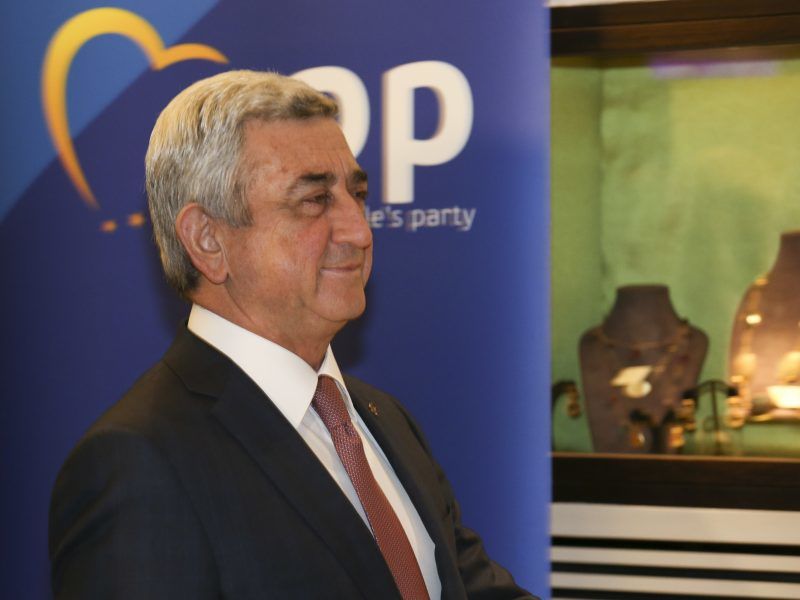 Under the terms of an amended constitution approved in 2015 by referendum, the presidency will become largely ceremonial.

Parliament, which is dominated by the ruling party, is to decide on Tuesday whether to install Sargysan as prime minister.

The Dashnaktsutsiun Party, the Republicans’ coalition ally, also backs Sargsyan’s candidacy, meaning he should easily secure the simple majority needed for election. No other candidates are running.

Opposition leaders have accused Sargsyan of changing the nation’s political system to ensure he can remain in power.

Sargsyan had denied any intention of becoming premier until March, when he said his appointment would allow him to share the benefit of his experience as president.

Armenia, a country of three million people in the southern Caucasus, seceded in 1991 from the then-Soviet Union but still relies on Russia for aid and investment. Many Armenians accuse the government of corruption and mismanaging the economy.