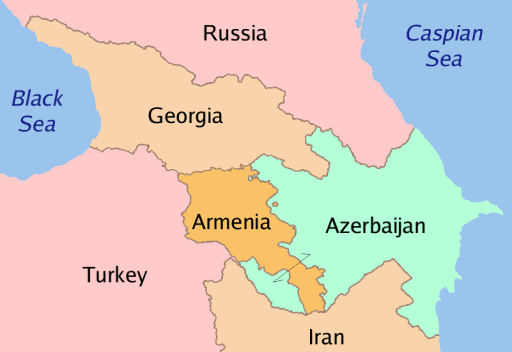 The standoff between Russia and the West over Ukraine has given Azerbaijan more clout as Armenia’s has decreased, writes Stratfor, the Texas-based global intelligence company.

Prior to the conflict in Ukraine, Russia was in a very strong position in the Caucasus region, which includes Armenia, Azerbaijan and Georgia. Russia’s defeat of Georgia in the August 2008 war countered Tbilisi’s efforts to join NATO, and Moscow expanded its military presence in the breakaway territories of Abkhazia and South Ossetia. Armenia, a longtime ally of Russia and the site of the Russian 102nd Military Base in Gyumri, had strengthened ties with Moscow in the security and economic spheres. Azerbaijan maintained a more independent and diversified foreign policy position because of its sizable energy resources and strategic location on the Caspian Sea. However, Russia’s military presence in the region and its alliance with Armenia effectively kept Baku in check, particularly since Russia is Armenia’s security guarantor in its ongoing conflict with Azerbaijan over the breakaway territory of Nagorno-Karabakh, which Azerbaijan lost in its 1988-1994 war with Armenia.

After the uprising against former Ukrainian President Viktor Yanukovich in February 2014, however, Russia’s strategic position took a massive hit. Replacing Yanukovich was a pro-Western government that prioritized strengthening ties with the European Union and United States. Given Ukraine’s existential importance to Russia, Moscow responded by annexing Crimea and backing a pro-Russian separatist movement in eastern Ukraine. Although these moves have created serious challenges for the Ukrainian government, they have also isolated Moscow from the West, sparking EU and U.S. sanctions against Russia and bringing relations to their lowest point since the end of the Cold War. This has also coincided with a drastic fall in global oil prices, which has seriously weakened Russia’s economy and limited Moscow’s room to maneuver on the foreign policy front.

The evolution of the standoff between Russia and the West has thus had ripple effects throughout Eurasia, with each country in the former Soviet periphery having to re-evaluate its position. In this context, Azerbaijan is a particularly important country because Baku had previously maintained a balanced position between the two sides and because the country’s energy resources could play a pivotal role in the standoff. The Europeans have ardently courted Azerbaijan — along with Turkmenistan — as they seek to diversify away from Russian energy supplies via the Southern Corridor. This has considerably strengthened Baku’s strategic position, as demonstrated by a 21 January meeting between German Chancellor Angela Merkel and Azerbaijani President Ilham Aliyev in Berlin. Merkel praised the important role Azerbaijan plays in “ensuring the energy security of Europe,” while downplaying the human rights issue that normally accompanies European interactions with Aliyev.

Azerbaijan’s new importance has increased its leverage over Russia, a development that could explain the shift in the Nagorno-Karabakh theater during the past year. Violence in the region has escalated since the Ukraine crisis broke out, including a sharp spike in cross-border casualties in August 2014 and the downing of an Armenian helicopter by Azerbaijani forces in November. This appears to be a product of a renewed assertiveness by Azerbaijan, which may no longer feel as threatened by an Armenian — and, by extension, Russian — reprisal as it once did. This could also explain why Armenia has so far been subdued and cautious in responding to acts such as the helicopter downing; Yerevan knows that Russia’s focus is still very concentrated on the Ukrainian theater.

That said, the uptick in violence does not mean that a return to full-scale military conflict between Azerbaijan and Armenia is looming. Russia still retains its military presence in Armenia, and Azerbaijan knows it cannot win a direct military confrontation with Russia, even considering Moscow’s current political and economic constraints. Instead, Baku has been testing the waters with a more limited engagement along the line of contact and with diplomatic maneuvering with key players like the European Union, the United States and Turkey. This strategy demonstrates Azerbaijan’s leverage to all parties involved and shows its ability to avoid making a commitment to any single country in what is still a very dynamic environment.

Armenia, meanwhile, has grown closer to Russia. It joined the Moscow-led Eurasian Economic Union at the start of 2015, a time of serious economic decline in Russia. Yerevan had political motivations for joining the bloc; it knew Armenia would be isolated and vulnerable without Moscow’s political and security backing.

Though the European Union has attempted to woo Armenia into its camp, Yerevan has so far rebuffed the West, choosing to forego an EU association and free trade agreement in favor of Eurasian Union membership. This strategy poses considerable risks for Armenia. Its economy is now closely tied to Russia’s, and some domestic political elements oppose further integration with Russia, but the Armenian government sees closer cooperation with Russia as the best option in the current environment.

The standoff between Russia and the West over Ukraine has given Azerbaijan more clout as Armenia’s has decreased, yet both countries remain significantly constrained by larger and more powerful forces. Still, their positions in the ongoing Nagorno-Karabakh conflict and their broader ties with Moscow and the West will play an important, and perhaps pivotal, role as the standoff continues.