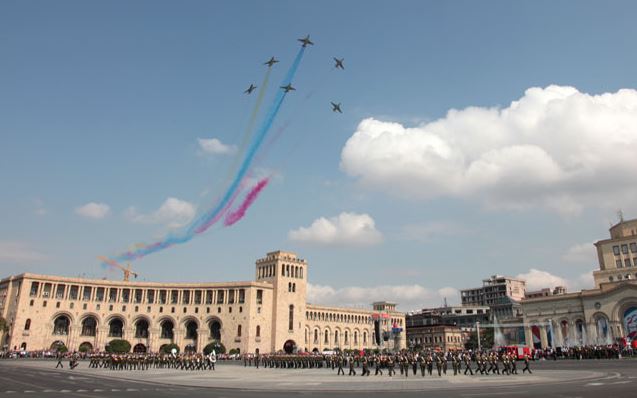 Azad Garibov is a leading research fellow at the SAM Centre for Strategic Studies, Azerbaijan.

The escalation brought increased international attention to the conflict resolution process. The subsequent meetings between the Azerbaijani and Armenian presidents in Vienna (16 May) and St. Petersburg (20 June) generated hopes for tangible progress in the peace process, deadlocked since the failure of the 2011 Kazan talks.

The presidents agreed to de-escalate the situation along the line of contact, increase the number of OSCE observers working in the conflict zone, and re-launch the resolution process based on the Madrid Principles.

However, the lack of progress since then and the increased ceasefire violations reveal that discussions of a real breakthrough are premature.

In fact, immediately after the de-escalation, Armenia made efforts to accelerate the delivery of new deadly weaponry from Russia, based on a July 2015 $200 million military loan agreement, and delayed negotiations to gain the time needed both to rebuild confidence in the Sargsyan government and in the country’s military capabilities, as well as replenishing the manpower and military hardware losses following the April fighting.

In July 2016, gunmen occupied a police station in Yerevan and held high-ranking police officers hostage in return for releasing Jirair Sefilian, an ardent critic of Sargsyan’s handling of the Nagorno-Karabakh conflict.

This also played into the government’s hand, given its desire to delay making concrete commitments in the peace process. Yerevan effectively utilised the crises to block peace negotiations, citing public disapproval and resistance to resolution of the conflict based on the Madrid Principles.

The parade also demonstrated the new Smerch multiple rocket launch system. But if parading the Iskanders was in part designed to frighten Baku, it achieved the opposite. Azerbaijan reacted quickly and harshly. Immediately, Azerbaijani Defence Minister Zakir Hasanov instructed the armed forces to increase their monitoring of Armenia’s strategic and military facilities and be ready to destroy them if necessary.

In addition to this demonstration of military power, Armenia also held a number of military drills in the occupied regions of Azerbaijan at the end of September and throughout October. The drills included checking combat readiness of heavy artillery and hardware, and were held in the scorched lands of the occupied regions around Nagorno-Karabakh, particularly in the Aghdam and Tartar regions.

Despite Yerevan’s attempts to depict the drills as the work of local Armenian forces in Nagorno-Karabakh, it is obvious that there is not a separate Karabakhi army; all its components are integral parts of the armed forces of Armenia.

For instance, when names of the first 56 Armenian soldiers killed during April escalation were officially revealed, it emerged that only 18 of them were from the Armenian community of occupied Nagorno-Karabakh. The rest were from different regions of Armenia.

It is not the first time that military drills in the occupied Nagorno-Karabakh and adjacent regions of Azerbaijan have threatened peace and security in the region.

In fact, during similar drills in the occupied territories in November 2014, two armed Mi-24 helicopter gunships flew over the Azerbaijani positions near Kangarli village in the Aghdam region. As it was seen from amateur video footage and later confirmed by the Azerbaijani Defence Ministry, soldiers – under apparent risk of being shot at – took down one of the helicopters using a MANPAD.

That incident was provoked by drills near the line of contact, and escalated tensions, giving rise to harsh statements about retaliatory measures.

It may be that military drills in the occupied territories and displays of newly acquired weaponry accompanied by harsh military rhetoric are addressed to domestic audiences and aimed at bolstering public confidence in Sargsyan; however, these moves clearly sabotage peace efforts and hamper the slim chances for negotiating a peace settlement.

Not surprisingly throughout the last few months, we have witnessed an increase in ceasefire violations in Nagorno-Karabakh. This was particularly marked at the end of October, at the height of Armenian military drills in the occupied territories. 31 October, saw one of the fiercest ceasefire violations, involving large calibre mortars and machine guns.

Thus, Armenia’s military muscle show-off threatens to shift the focus away from peace negotiations, and towards armament efforts in the region. In so doing, such measures do not contribute to the security of Armenia but rather jeopardise its national security via the increasing risk of renewed fighting around Nagorno-Karabakh.