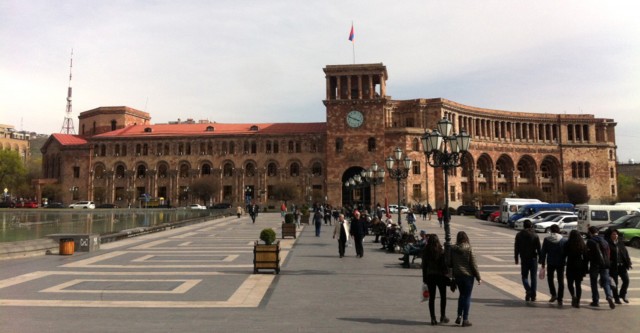 The latest phase of the Nagorno-Karabakh conflict is just another reminder of Armenia’s unenviable geopolitical position, as significantly, its valuable alliance with Russia has not helped, writes Stratfor’s Eugene Chausovsky.

The tension in Yerevan was palpable. Overnight 1 April, just a few days before I arrived in the city, fighting had broken out in the disputed territory of Nagorno-Karabakh, home to a quasi-independent statelet backed by Armenia known as the Nagorno-Karabakh Republic. The line of contact where Karabakh fighters clashed with Azerbaijani soldiers was around 300 kilometers (186 miles) away, but in Yerevan it felt much closer. I found myself in the city amid the breakdown of a cease-fire that had largely held since 1994.

Walking the streets, I caught snatches of nervous conversation – again and again I heard people mention “Azerbaijan” and “Artsakh,” the Armenian name for Nagorno-Karabakh. The emotional attachment on the part of the capital city’s residents to the small breakaway republic was clearly strong. Large groups of men huddled around taxis and on street corners to listen intently to news of the conflict being played on the radio. Taxi drivers could speak of nothing else. Everyone seemed to have at least one relative or friend living in Nagorno-Karabakh.

The fighting proved to be short-lived, and within three days a cease-fire was back in place. Just like that, the conflict gave way to the uneasy peace that has predominated for over two decades. Or had it? The question still remained: Why did the conflict break out in the first place? It may have been just another historical blip, or it could presage a larger conflict to come, perhaps one involving regional heavyweights Turkey and Russia, or even Western powers. And what was the role of those powers in the current fighting?

I discussed these questions with anyone I could — government officials, political analysts, journalists and ordinary people. Their opinions varied in the details, but they generally agreed on three things. Most of them blamed Azerbaijan for initiating the fighting because the status quo is favorable to Armenia but detrimental to Baku’s interests. Many also believed (correctly) at the outset of the conflict that the fighting was unlikely to spark a larger war. They noted, with anxiety, that Armenia stands alone in Nagorno-Karabakh, with no one to turn to for help.

These are all, of course, simply opinions. Moreover, they are informed by fear and national bias. But they do provide some insight into the mindset of the Armenian people. The last of them, Armenia’s isolation, is particularly noteworthy because it has grounding in Armenia’s current geopolitical position. The nation is located in the unstable Caucasus region, along with Georgia, Azerbaijan and the volatile Russian republics of Chechnya and Dagestan. The region is surrounded by Russia, Turkey and Iran – three massive powers with diverging interests. Tiny Armenia clearly occupies a tough position and, because of it, must navigate a complex web of relationships. Yerevan is hostile toward Azerbaijan because of Nagorno-Karabakh, and it also has a tense relationship and closed border with Turkey, which supports Azerbaijan. Georgia also cooperates closely with Azerbaijan and Turkey on energy and security matters. Iran is not a major geopolitical player in the Caucasus, at least for now.

To survive in such a volatile environment, Armenia has chosen to strategically align itself with Russia since the fall of the Soviet Union, joining both the Eurasian Economic Union and the Collective Security Treaty Organization. Armenia hosts nearly 5,000 Russian troops in the 102nd military base in Gyumri, and Russia is responsible for guarding Armenia’s border with Turkey. Russia owns much of Armenia’s strategic infrastructure, including energy pipelines and telecommunications firms, and the country’s economy is closely tied to that of Russia.

But this loyalty is not always reciprocal. Whereas friendship with Russia is a top priority for Armenia, the relationship is not the only interest for Moscow, and Russia needs to weigh it against other strategic considerations. Its response to the recent outbreak of conflict demonstrated this. Rather than backing Armenia militarily or politically in the hostilities, Russian officials instead called for calm. Armenians were quick to point out that Russia is a major supplier of weapons to Azerbaijan, some of which were used by Baku in the recent escalation. Moscow has taken an evenhanded political approach with Yerevan and Baku, and Russian Prime Minister Dmitri Medvedev visited both capitals in succession on 7 April and 8 April.

Russia’s balanced response may seem odd given Armenia’s loyalty and Azerbaijan’s often confrontational attitude toward Moscow. Baku’s strategic partnership with Ankara makes it seem even stranger. Most Armenians I spoke to, however, put forward theories about Russia’s response (or lack thereof). Some thought Moscow wanted hostilities to escalate in Nagorno-Karabakh so that it could intervene later and extend its influence over both Armenia and Azerbaijan. They believed Russia’s military presence in Armenia was less a security guarantee in the conflict over Nagorno-Karabakh than a check on the power of Turkey and the West. Others saw Russia in a more positive light but admitted that Moscow’s larger struggles with Turkey over Syria and with the West over Ukraine manifest in the Caucasus and exacerbate conflicts, sometimes to the detriment of Armenia.

The latest conflict is just another reminder of Armenia’s unenviable geopolitical position. Its valuable alliance with Russia has not helped in the last few days amid a flare-up in greatest threat to Armenian security. But Yerevan has no one else to turn to: Turkey is allied with Azerbaijan, and the West is not willing to risk a confrontation with Russia, as shown by its inaction in Georgia. Armenia’s commercial and political ties with Iran might later prove valuable, but at the moment Tehran is in no position to play a meaningful role in the Caucasus or to challenge Russia in any capacity. Someday, though, that could change.

For now, Armenia must to a great extent fend for itself in Nagorno-Karabakh. Unless the simmering tension boils over into a full-blown conflict on par with the war of 1988-1994, the attitudes of Russia and other regional players will likely remain the same. The next steps are unclear, but the truce is shaky at best, meaning violence may flare up in the region. When it does, Yerevan will find itself unsettled and anxious once again, with little help from its allies.