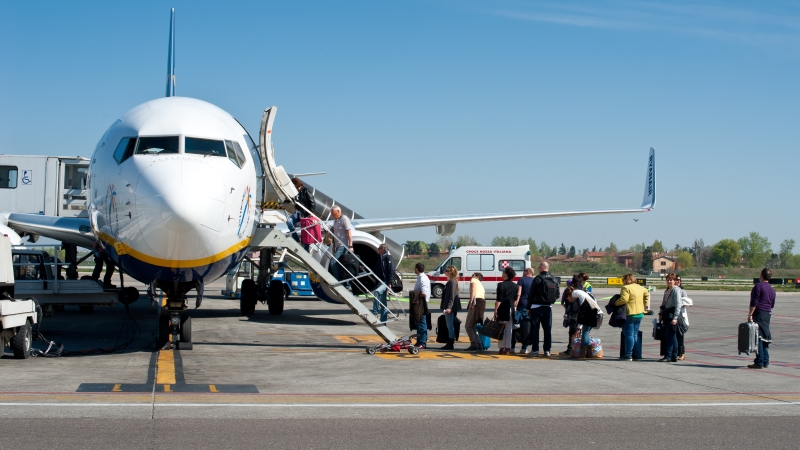 "I think we have to do something about fairness when it comes to attributing the real environmental cost of transport," said MEP Jutta Paulus. [pio3 / Shutterstock.com]

New legislation tabled by the European Commission would oblige airlines refuelling at EU airports to uplift kerosene mixed with a set percentage of sustainable aviation fuels. The proposed ‘ReFuelEU Aviation’ regulation is a basis to ensure that industry bears the true cost of aviation’s impact on the environment, argues MEP Jutta Paulus.

Jutta Paulus is a German MEP with the Greens/EFA Group. She is the rapporteur for the Committee on Industry, Research and Energy’s opinion on the ReFuelEU Aviation file.

In your opinion report you express support for a prohibition on short-haul flights on routes where viable, low-carbon alternatives exist. So, this would essentially follow the French model, but EU-wide?

More or less. Of course, to be very honest, it is not possible that the European Union says we are actively prohibiting these flights, we are sending troops to prevent these planes from leaving the ground!

So, it’s more or less saying: this is our intention, and we should ensure that these flights will no longer be able to distort the market. We don’t have fuel tax [on flights], and we have quite significant subsidies that member states are paying, for small airports for example, which would not be able to defend their position on the market were it not for state subsidies.

This has been a long-standing issue. And quite a few of those very short haul flights are only possible with those subsidies.

Are you worried that if this is brought into effect it could be unpopular with citizens, who expect to be able to take cheap flights?

It is often said that poor people won’t be able to afford their one flight per year for a holiday [due to climate measures]. But if you look at it very closely, then those highly subsidised flights are for the advantage of those that fly a lot and not necessarily for those that only have one flight per year.

And if you look at the cost which is attributed to using cleaner fuels, this is actually a rather small share compared to the cost of your holiday as a whole. So basically, by not being able to fly to Mallorca or wherever for 80 euros but having to pay 120 euros, well, of course forty euros is forty euros, but let’s say it’s one dinner.

So, I think that should not be the argument when it comes to necessary decarbonisation. Especially taking into account that the effects of climate change will hit the vulnerable population more than the ones who will be able to adapt.

I think what a lot of people or a lot of companies don’t seem to realise, including industry in my own home country [of Germany], is that if climate change proceeds unalleviated without us taking action, then of course this will cause major distortions throughout the whole global economy.

Around 3% of the population fly once a year, and the other 97% don’t. So, if you look at it from that point of view, if the global economy faces turmoil, it would probably not be the first priority of people to buy a Mercedes, or to go on a flight.

So, if the global economy is disrupted, then flying will be affected more than food, for example.

One criticism is that greener transport options, like rail, are often more expensive than flying. Do you think more needs to be done to drop the price of low-carbon forms of transport?

Of course. I think it is quite weird that we have these pretty large subsidies for regional airports, whereas rail doesn’t get these subsidies.

There is this notion that rail must be able to cover its own costs. The state should not build new railway lines and not give money to the sector, whereas this has been done for the aviation sector for ages.

There is already an unfair competition on this matter, especially if you regard the climate cost, which is not internalised in aviation.

By strengthening the EU Emission Trading System, where through the CORSIA instrument aviation only has to pay a small share of the actual climate damage, you would already change the way that transport costs are being distorted today.

So yes, I think we have to do something about fairness when it comes to attributing the real environmental cost of transport.

You also feel that non-CO2 effects aren’t fully taken into account in the current proposal by the Commission, is that correct?

Right. I mean, it would not be possible to include the non-CO2 effects of aviation in the ETS. You can measure CO2 fairly easily – so and so much fuel over so and so much distance, and you know how much CO2 has been emitted.

When it comes to the non-CO2 emissions these are incredibly difficult to measure. And therefore, we’re going more or less for an indirect way by limiting the sulphur and aromatic content of the fuel, because these are mainly responsible for the non-CO2 effects.

It’s not a technological problem, you can easily lower the sulphur and the aromatic content of fuels. It does cost money; you will have a 5% or 10% surcharge on aviation fuel. But it’s not tripling the price of the fuel.

Would you like to see liquid hydrogen and electricity counted towards the SAF targets?

In our draft opinion for the ITRE committee, we said there should be a minimum share of electrical and hydrogen powered flights for the respective milestones. We would not go so far as to say it must be so and so much electrical and so and so much hydrogen, because for that the market is still too immature.

It’s very hard to predict the cost of hydrogen. For example, there are a lot of different studies around trying to calculate how much green hydrogen will cost in 2030. But what we do know is that we will not be able to cover all the demand with biofuels alone.

The landmass on this planet is limited. We will not be able to increase it – on the contrary, it will probably decrease due to the rising sea level. So, we must take this physical reality into account.

The argument against e-fuels is that they require a lot of additional renewable energy. Do you think there’s a good case to say that this renewable energy should go into e-fuels rather than other aspects of the economy?

It is much more efficient, so to speak, to harvest energy in the form of wind or solar, because photosynthesis is incredibly inefficient from an energy harvest factor point of view.

And that’s the main reason why I’m saying, okay, look at the development of renewable energy around the globe, we are on an exponential growth curve here. And this will not change because, incredibly, these technologies are becoming cheaper.

Today, wind and solar are the cheapest form of electricity in most regions of the world.

And we have so many regions where it would not be possible to grow biofuels on your land, because it’s too dry for example. Look at the North African countries, where you really have a lot of dry regions, but it’s not at all a problem to harvest solar energy there.

So, it’s really a matter of increasing the land where you can produce energy as compared to biofuels.

Of course, it’s true, we need all of this renewable electricity also to decarbonise other sectors. And there, my argument is always, yes, e-fuels are incredibly inefficient, but the consequence should not be that we stick with fossil fuels, but that we limit those e-fuels to sectors where there’s no viable alternative.

For example, I don’t think it’s a good idea to throw e-fuels into road transport, because for road transport we have other options. For personal cars, you could use batteries, even for trucks. So, we should not waste e-fuels, and also biofuels, for a sector where we can use electricity.

And yes, it is a viable argument that right now with renewable electricity, it would be most efficient to replace coal electricity, but at the same time, we have to put the [transport] sector on track.

And that’s the main reason why I say why not take the aviation sector, which is more or less not paying the environmental consequences right now, to ramp up the demand and therefore incentivise investment in those technologies.

You also would like to get rid of the SAF mandate exemption for business aviation.

When we read the Commission proposal, we said, why on earth should business aviation not be included? I don’t see any reason for that. To put it in a populistic way: why should the family flying to Mallorca be targeted, but the Kim Kardashians and Paris Hiltons of this world should not?

Is there anything else that you wanted to mention?

In Europe, we really have the chance of bringing our own industry forward through this mandate.

We gave away this advantage in around 2010 when it came to the solar industry. We had an economic advantage, but chose to say, ‘Well, maybe this will not fly.’ And the Chinese said, ‘Okay, we believe this is the future. So we’ll buy all those patents, we will buy all those companies.’ And now the technological leader in the solar industry is China.