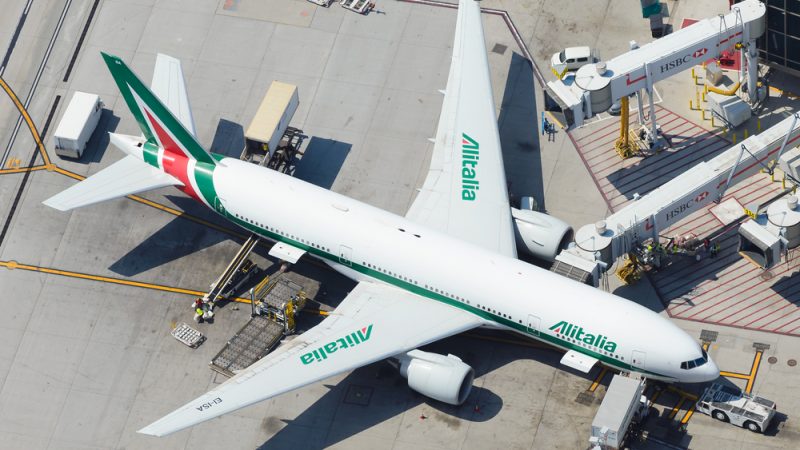 Alitalia has been given a fresh tranche of cash. [Photo: Thiago B Trevisan / Shutterstock]

The European Commission gave its blessing on Friday (4 September) to the Italian government’s plan to pump €199.45 million into Alitalia, as Rome continues to throw money at its embattled flag-carrying airline.

The €200m grant is intended to compensate Alitalia for damages incurred by the coronavirus pandemic, and EU competition regulators say the bailout is in line with Union law.

According to the Commission, the money “will compensate the damage suffered by Alitalia that is directly linked to the coronavirus outbreak” and “does not exceed what is necessary to make good the damage”.

EU law allows governments to pump cash into struggling companies that suffer “damage directly caused by exceptional occurrences”. In a statement, the EU executive reiterated that the virus outbreak qualifies as “exceptional”.

A report by an Italian parliament committee had found that Alitalia incurred damages worth around €250m between February and June, although the government aid takes into account the March-June period.

“This measure will enable Italy to compensate Alitalia for the damage directly suffered due to the travel restrictions necessary to limit the spread of the coronavirus,” said Competition Commissioner Margrethe Vestager in a statement.

The Danish official added that “we continue working with Member States to find workable solutions to support companies in these difficult times, in line with EU rules” and that ongoing inquests into past state support for Alitalia are still ongoing.

That includes a €900m loan granted in 2017 – subject to a probe since 2018 – and another €400m tranche dating to 2019, which the Commission has been investigating since earlier this year.

Alitalia is in the middle of significant restructuring by the government, which plans to invest a further €3 billion. That aid, which Rome insists is “not another rescue” will also be subject to Commission approval.

A major part of that money will be earmarked for renewing the airline’s ageing fleet of aircraft with more economical planes better suited to a reduced network.

Rome faces a more difficult task in getting unconditional support for that aid, as Alitalia was in financial difficulty before the crisis struck. The Commission’s relaxed state aid rules only apply to firms that were in rude health before the outbreak.

Governments across Europe have moved to prop up their airlines with more than €30bn in aid after the pandemic curbed air travel almost completely in March and April, as lockdown measures and quarantines forced carriers to ground planes en masse.

According to air traffic management regulator Eurocontrol, 20,000 flights are expected to take to the skies in September, which is only 55% of the number recorded in the same month last year.

The organisation added in its monthly report that it downgraded the 20,000 figure after a patchwork of travel restrictions across Europe dulled demand. It advised governments to start adhering to EU guidance on consistent measures.

A slow recovery has prompted airports and airlines to club together and agree on a common proposal on waiving slot rules, which govern when and where aircraft can land and take off and which form the backbone of most carriers’ business plans.

The Commission agreed to suspend the rules earlier in the year and now the decision is up for review, with a report due on 15 September. The industry wants an exemption extended through the autumn and winter months.