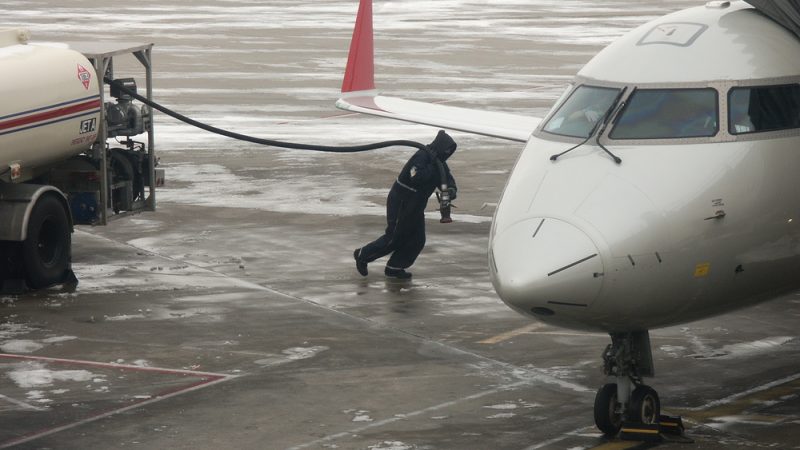 The Commission is mulling the idea of a fuel blending mandate. [Photo: Shutterstock]

Electric battery-power and hydrogen are two promising technological solutions in the road transport sector’s quest to reduce its environmental footprint but for aviation, those two options are nowhere near as mature.

The range-to-weight ratios of the current generation of batteries limit electric power’s potential applications in flight. Although hydrogen promises on paper to go further, lack of prototypes and development makes it more of a prospect for the next decade.

In the meantime, so-called sustainable aviation fuels (SAFs), which work in existing engines and are produced using waste materials or renewable energy, have been touted as a ready-to-use, drop-in alternative.

SAFs have a separate raft of challenges to overcome.

According to the International Energy Agency, “the availability of suitable fuels is low. In addition, uptake is constrained by costs that are higher than fossil fuels at current oil prices, especially since policy support is less widespread than for road transport.”

Under the agency’s sustainable development scenario, low-carbon fuels need to supply 9% of aviation’s demand by 2030. However, in 2018 global use topped out at just 0.01%, illustrating the immense challenge the sector faces.

The European Commission aims to boost supply and demand for SAFs with its upcoming ReFuelEU initiative, which is likely to include a blending mandate, increased multipliers to help countries hit renewable energy targets, and better monitoring.

According to the Commission, SAF use in the EU only hits an estimated 0.05%, although the executive admitted in an assessment published earlier this year that limited information makes calculating that figure a challenging prospect.

Exact details about how ambitious the blending mandate would be are still scarce, although sources familiar with the Commission’s current preferences suggest that one possible option is up to 5% by 2030.

Dr Christoph Wolff, a mobility expert at the World Economic Forum, suggest that “ideally, you would harmonise the blending percentage and prevent ‘tank tourism’. A level playing field is needed for this to work.”

Some countries have already started to deploy blending mandates. Norway introduced an initial 0.5% requirement at the beginning of 2020 to spark demand, while Sweden plans to introduce an emissions reduction target just for aviation next year.

In terms of timeframe, the Commission is set to indicate in a new aviation climate impact study that a SAF mandate could be implemented within two to five years, based on findings collated by the European Aviation Safety Agency (EASA).

The study is currently in draft form and will reportedly be published in November.

Beyond the headline-grabbing blending target, ReFuelEU will also look into changing aspects of the EU’s renewable energy directive (RED II), a vast collection of rules governing clean energy and its deployment into various sectors.

Under the current directive, which was only recently finalised and will run up until 2030, 14% of transport fuels must derive from renewable energy by the end of the decade. To spur countries into action, RED II offers so-called ‘multipliers’ as percentage-boosting perks.

“Currently, with a 1.2 multiplier for aviation, member states where biofuel is supplied to the aviation sector are allowed to count towards their national target 20% more than the SAF volumes provided,” the Commission’s initial assessment explains.

It adds that “the approach could be further specified ensuring a harmonised implementation and the multiplier could be increased”.

However, in its feedback on ReFuelEU, Sweden’s infrastructure ministry warned that “an increased multiplier would likely lead to a decrease in the total use of renewable energy in the transport sector, which goes against the purpose of increasing the use of SAF.”

The ministry also insists that the initiative “should not exclude food and feed-based biofuels that fulfil the sustainability criteria and minimum greenhouse gas savings criteria”, suggesting that there will be a debate between the Commission and member states.

Given the EU executive’s intention to update all of the bloc’s clean energy rules as part of its quest to increase an overall emissions reduction target from 40% to 55%, other pieces of legislation are also likely to come into focus.

Early in 2021, the EU’s carbon market – the emissions trading system (ETS) – will be revised too. Issues like what to do with the maritime sector, whether to include road transport and aviation’s allocation of free pollution permits will all be addressed.

The Commission’s carbon markets director, Beatriz Yordi Aguirre, told EURACTIV that “the ETS is a machine that is designed so that it can invest in things like biofuels”, either through revenue payments to national governments or from its innovation fund.

“There is no dichotomy or debate between alternative fuels, innovation and ETS. All three can work together,” she added. The EU executive has also been urged by airline groups to make sure that whatever changes are made take into account the global context of aviation.

Another important aspect that ReFuelEU aims to address is a monitoring and reporting gap, which currently means that actual SAF usage is often difficult to estimate. That proposed part of the draft initiative is likely to garner widespread support.