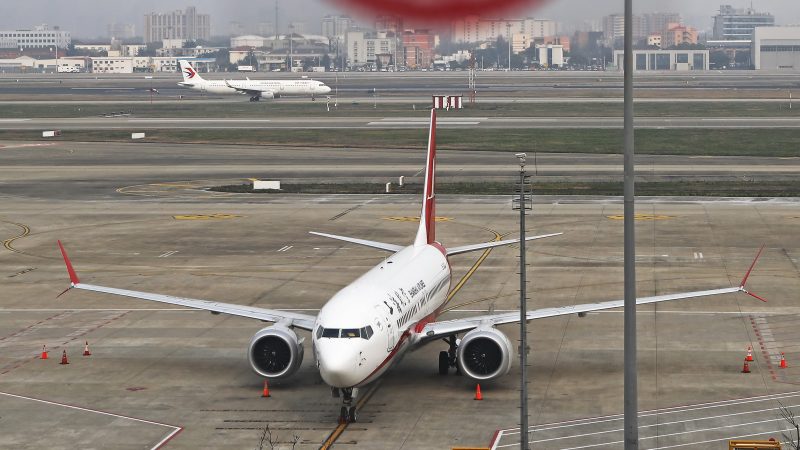 China has grounded all MAX 8 planes for safety concerns after an Ethiopian Airlines 737 crashed minutes after take-off on 10 March. [Photo:EPA-EFE/LIU WEI CHINA OUT]

The decision by the European Union Aviation Safety Agency (EASA) followed in the wake of groundings by other authorities, including the UK’s civil aviation authority (CAA), Australia, China and Ethiopia.

EASA said in a statement that as of 19:00 UTC all flights by 737 MAX 8s and 9s to, from and within European airspace would be cancelled, in what the regulator called “a precautionary measure”.

An Ethiopia Airlines crash on Sunday (10 March), which claimed the lives of 157 people, prompted an in-depth investigation into whether it was linked to a similar 737 MAX 8 crash that caused 189 deaths in October.

Although no evidence has been found to tie the responsibility to US aircraft manufacturer Boeing, several airlines and authorities have now grounded the aircraft as a precautionary measure.

Both crashes occurred during takeoff but Boeing has so far stood by its new aircraft, launched in 2017, insisting that there is no “basis to issue new guidance” on safety procedures.

In a statement the company said it had dispatched an investigation team to Ethiopia and extended “heartfelt sympathies” to the families of victims.

Nevertheless, Ethiopia took its four remaining MAX 8s out of service as an “extra safety precaution”, while major Chinese airlines grounded nearly 100 of the planes, citing “zero tolerance” for any possible safety risks.

The UK, Singapore and Australia all took the step on Tuesday of banning all MAX 8s from flying to or from their respective airspaces.

Later in the day, German transport minister Andreas Scheuer said that Germany’s airspace would also be closed to the aircraft in question until doubts had been cleared up, with France and Ireland both following suit.

UK authority CAA said that “as we do not currently have sufficient information from the flight data recorder we have, as a precautionary measure, issued instructions to stop any commercial passenger flights from any operator arriving, departing or overflying UK airspace”.

A number of airlines from around the world have also taken their aircraft out of service, with most issuing statements that they will be grounded until more information is provided.

Norwegian Airlines had said that it would keep flying its 18 MAX 8s but revised its decision after aviation regulators lost faith in the aircraft.

The world’s largest charter airline, TUI, had also said there was “no indication that we can’t operate […] in a safe way”. But following the CAA’s decision, its aircraft will have to be grounded.

The US Federal Aviation Administration (FAA) is responsible for certifying all new Boeing aircraft, while the European Union Aviation Safety Agency (EASA) validates them to fly in Europe’s airspace.

Airplanes are becoming far too complex to fly. Pilots are no longer needed, but rather computer scientists from MIT. I see it all the time in many products. Always seeking to go one unnecessary step further, when often old and simpler is far better. Split second decisions are….

FAA has said that it is assisting the Ethiopian authorities in their investigations, while EASA commented that more information would be provided when available.

No US airline had grounded their planes at the time of publishing.