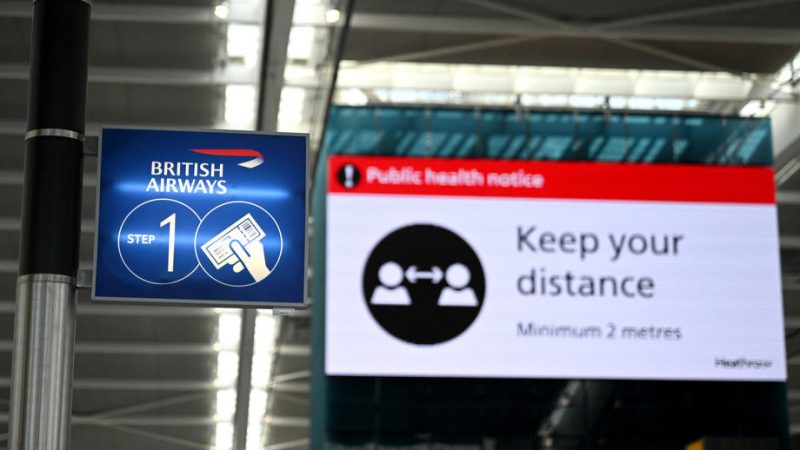 A social distancing sign at Heathrow Airport, in Britain, 2 May 2020. [Photo: EPA-EFE/NEIL HALL]

European Commission guidelines on resuming virus-disrupted transport links do not address whether airlines should block out the middle-seat of aircraft or not. The aviation industry had insisted that social-distancing measures are not viable on planes.

According to the transport and tourism package published Wednesday (13 May), personal protective equipment and regular cleaning should be among the main measures implemented by operators.

But the EU executive’s communication holds off from issuing guidance on social-distancing measures on board aircraft, pending further work by Europe’s aviation safety agency (EASA) and disease prevention authority (ECDC), due to be completed in the coming weeks.

“These technical operational guidelines will take into account the safety management principles developed to ensure the safety of the European aviation system and will set out a baseline aviation health safety protocol,” the document reads.

It adds that the guidelines “will specify additional mitigation measures, in close coordination with national competent authorities, with the aim of deploying measures for the operation of flights coherently across the EU.”

That marks a backtrack in the Commission’s thinking, as a previous draft of the transport rulebook – seen by EURACTIV – was more explicit in its recommendations for on board measures.

“Existing protective characteristics of an aircraft cabin, such as hospital grade filtering and vertical airflow, provide adequate mitigation in the absence of full physical distancing,” the draft communication said.

It added that “mandating the use of empty seats to increase physical distancing in aircraft is therefore not recommended”.

EU transport chief Adina Valean told journalists that “we are not recommending right now specifically to have empty seats in airplanes. Because we know aircraft have certain features like hospital-grade air filtering.”

She declined to comment on the previous communication draft but confirmed that EASA and ECDC are working on potential new measures.

Europe’s airlines had urged the EU executive not to set rules for on-board social-distancing, insisting that measures like blocking the middle seat do not have health benefits and would prevent carriers for making a profit on flights.

“Physical separation on board – including leaving middle seats free – is not viable for the air transport industry given it would reduce the maximum number of passengers onboard to between 50-66% of aircraft capacity,” said lobby group A4E earlier this month.

“Due to high operating and other fixed costs, airlines require planes to be at least  77% full in order to break even.”

Health experts have also pointed out that the dimensions of an aircraft do not mean passengers can be kept the recommended 1.5-2 metres apart, prompting concept artists to imagine what cabin interiors could look like in the future.

The idea has of course prompted interior designers to imagine what economy class could look like. I shudder to think what regulators would make of this: pic.twitter.com/tycg6h8LsF

Ryanair CEO Michael O’Leary previously said that social-distancing on board was an “idiotic” concept and said his company would not resume flights if they were made a legal requirement.

The low-cost flyer has since announced that it will put planes back in the sky in July and implement new steps, including cashless payments on board and no queuing for the toilet. Passengers will have to ask cabin crew for permission first.

In a long list of other guidelines targeted at air travel, the Commission says that electronic ticketing and check-in should be ramped up in order to prevent large groupings of people, while interactions with cabin crew should be kept to a minimum.

Masks should also be worn wherever social-distancing cannot be guaranteed, such as on board aircraft, although the document does not say who should provide the PPE. Airlines have already said that passengers should provide their own masks.

Carriers like Ryanair have encouraged travellers to take their temperatures before leaving for the airport and A4E has called on national authorities to conduct and pay for health checks at airports.

The Commission agrees in that regard, stating that “airports and airlines are not qualified to provide health services, such as taking health screening decisions on passengers, which should be implemented by the competent authorities.”