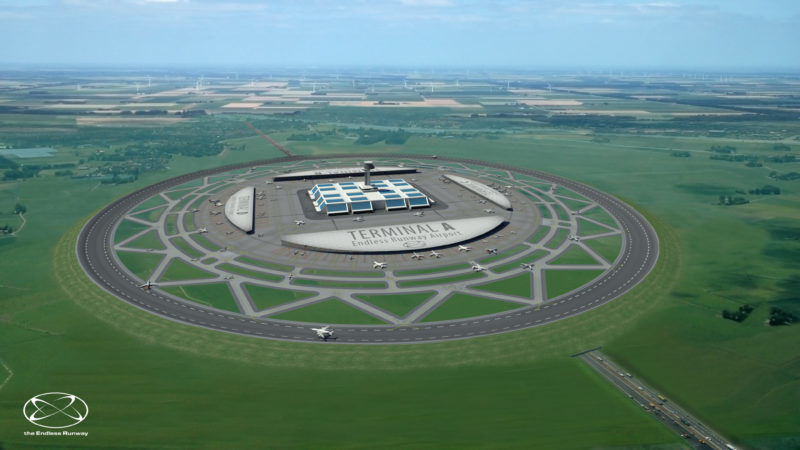 Air traffic growth is expected to keep rising in the coming years and airport capacity will have to keep up with that. But runway expansion is often a difficult issue, both logistically and from a public opinion point of view.

The UK still doesn’t know what to do with its main hub, Heathrow, as local populations have strongly opposed the building of a new runway. Alternative ideas include expanding Gatwick Airport instead or even building a new airport in the Thames Estuary, dubbed ‘Boris’ Island’.

Berlin is still dealing with the nightmare that is its long-overdue Brandenburg Airport project. A replacement hub in north-west France, near Nantes, has also faced strong opposition.

That’s where Henk Hesselink and his circular runway idea come into play.

Instead of traditional straight runways, his vision of the airport of the future is a terminal complex enclosed by a massive banked-runway.

Not only does the idea potentially save space, it allows aircraft to land and take-off in the direction of travel. It also reduces the impact of factors like cross- and tail-winds, which all save fuel.

Hesselink’s consortium has been working on the concept for a number of years and has benefited from funding under the EU’s Community Research and Development Information Service (CORDIS) programme.

In its final report, the ‘Endless Runway’ project concluded that take-off and landing tracks could be shortened by up to 10%. Taxi-times would also be reduced.

The project acknowledged that the construction costs of a 10km-long, 3km in diameter circular runway would be much higher than a conventional airport.

The BBC highlighted Hesselink’s project last month and social media users were quick to raise a number of questions about the idea. The Dutch engineer had clearly done his homework and was able to answer all of them.

Most queries were to do with safety and included points about an aircraft’s wingtips maybe touching the top and bottom of the steeped banking, as well as what would happen in the case of an aborted take-off.

Hesselink pointed out that their concept designs would accommodate even the largest aircraft and that an aborted take-off would actually be safer on a circular runway, as there is no end to the tarmac.

British-born pilot and environmentalist Jeremy Rowsell has made history this week by flying a light aircraft across Australia using a conventional fuel blended with fuel derived from plastic waste. EURACTIV’s partner edie.net reports.

When asked what would happen in case of extreme weather conditions, like rain and ice, the Dutchman said that advances in building technologies already mean runways can cope well. He also added that airport infrastructure and office blocks could be built under the runway, which would in turn heat the surface.

But the engineer also made it clear that the endless runway concept is just that, a concept. The aim of the project was to react to a 2050 study by the European Research Establishments in Aeronautics (EREA) and the growth in capacity envisaged by the report.

The project ultimately showed that the circular runway idea is feasible and outlined future requirements needed to make it a reality.