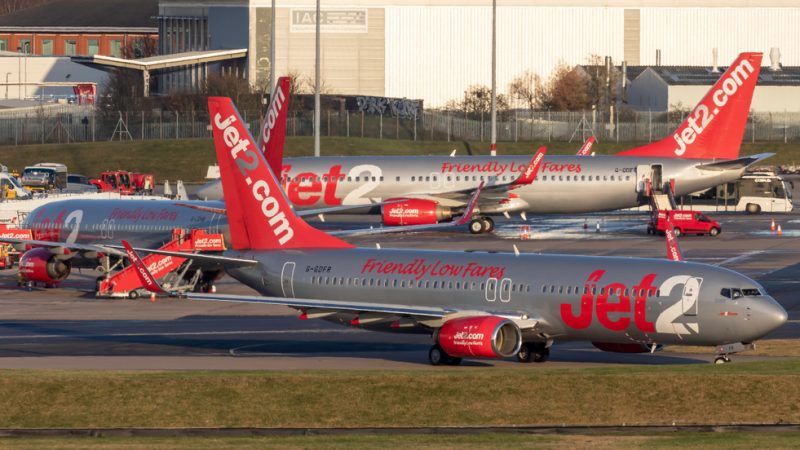 Jet2 grew its emissions the most in 2019 compared to the year before. [Photo: Benthemouse / Shutterstock]

Fourteen of the continent’s largest carriers – including Air France, easyJet and Ryanair – emitted 1.6 million tonnes of carbon dioxide more in 2019 than in 2018. Package holiday airline Jet2 increased its output more than 10% year-on-year.

According to Emissions Trading System (ETS) data published on Wednesday (1 April), some airlines managed to reduce their emissions. Alitalia, British Airways and Norwegian all declared lower figures than in 2018.

Aviation experts told EURACTIV that Jet2’s increase is down to its reliance on older, less-efficient planes, while BA’s decrease is due to the carrier’s decision to revamp its fleet with new aircraft which burn less fuel.

The ETS only includes flights take-off and land within the EU. International journeys are not eligible currently, although a review of the carbon market’s legislation may broach the subject next year.

This year is widely expected to break the industry’s hot streak of emissions increases due to the impact of the coronavirus, which has reduced air traffic by up to 90%. Border closures and travel restrictions have slashed demand with no short-term reprieve in sight.

Although some airlines are expected not to survive the current crisis while others are already looking for government aid to ride out the slump, environmental groups are already cautioning of the sector’s ability to bounce back once the pandemic passes.

“Airlines grew their emissions right up until this crisis. But this current bust will be followed by another boom in CO2 so long as aviation emissions remain untaxed and unregulated,” said Andrew Murphy from clean mobility group Transport & Environment.

Jet fuel is exempt from taxation but some EU countries are looking into scrapping kerosene’s derogation. A study by the Commission suggested last year that a bloc-wide levy could net up to €25 billion annually.

Airlines want any attempts to impose green taxes on the sector put on the back-burner during the crisis and the recovery period. Air France CEO Benjamin Smith said in March that planned levies would damage the industry further.

France won EU approval on Tuesday (31 March) to defer until 2021 some aeronautical taxes due over the course of this year and to offer carriers a 24-month grace period in which to pay them.

The Commission did not state which taxes are eligible for the waiver under newly loosened state aid criteria but a new levy on all flights departing French airports could be included in the financial bailout.

US airlines are set to enjoy $50 billion in government aid but a proposal by Senate Speaker Nancy Pelosi to attach environmental strings to the bailout did not receive sufficient backing. Pelosi’s original idea would have obligated airlines to halve emissions by 2050.

Before the coronavirus took hold in Europe, momentum had begun to build behind an idea raised by Poland that would scrap free ETS permits issued to airlines each year.

In 2019, carriers banked €800 million in pollution permit gratuities – about 50% of the sector’s total – and aviation is the only ETS-covered sector still increasing its emissions. According to yesterday’s preliminary data, both energy and industrial facilities recorded decreases.

At a meeting of EU environment ministers on 5 March, 10 member states spoke in favour of rethinking air travel’s free allowances, although there was disagreement on whether the permits should be immediately scrapped or gradually phased out.

UN aviation agency ICAO intends to use 2020 as its baseline for a global emissions offsetting scheme known as CORSIA, scheduled to enter its pilot phase in January 2021.

CORSIA caps aviation output at this year’s level and will obligate countries to pay to offset any further air travel growth by funding certified projects geared towards boosting renewable energy or reforestation.

ICAO members agreed on a first set of offset schemes to be deployed during the initial two-year-long test period back in March but may yet push for a rethink on the baseline, which under the current timetable will ratchet up the burden on airlines.

The Environmental Defense Fund, a US-based NGO, said revisiting the rules, brokered in 2016, would be “a dangerous mistake” and expose CORSIA to more wholesale changes.