Global emissions from air traffic have shot up by as much as 214% compared with 1990. And this despite massive technological progress, because in the same period it was possible to reduce fuel consumption of European aircraft by 44%, as the German Air Transport Association points out. [06photo/ Shutterstock]

Many people claim they are flying less to protect the environment but figures from 2018 say otherwise. The aviation industry is doing better than ever and its emissions have more than doubled since 1990. EURACTIV Germany reports.

This article was written in the framework of the EDJNet project.

“Flight shame” is a growing phenomenon. Last year, many young people followed Greta Thunberg’s example, saying they wanted to do away with the aeroplane.

But the figures say otherwise: humanity has never flown as much. According to Eurostat’s latest data, more than 63 million people in the EU took a plane in 2018, an increase of 6% on the previous year, and a 43% jump compared to 2010. And almost half of these connections (46%) were intra-EU flights. 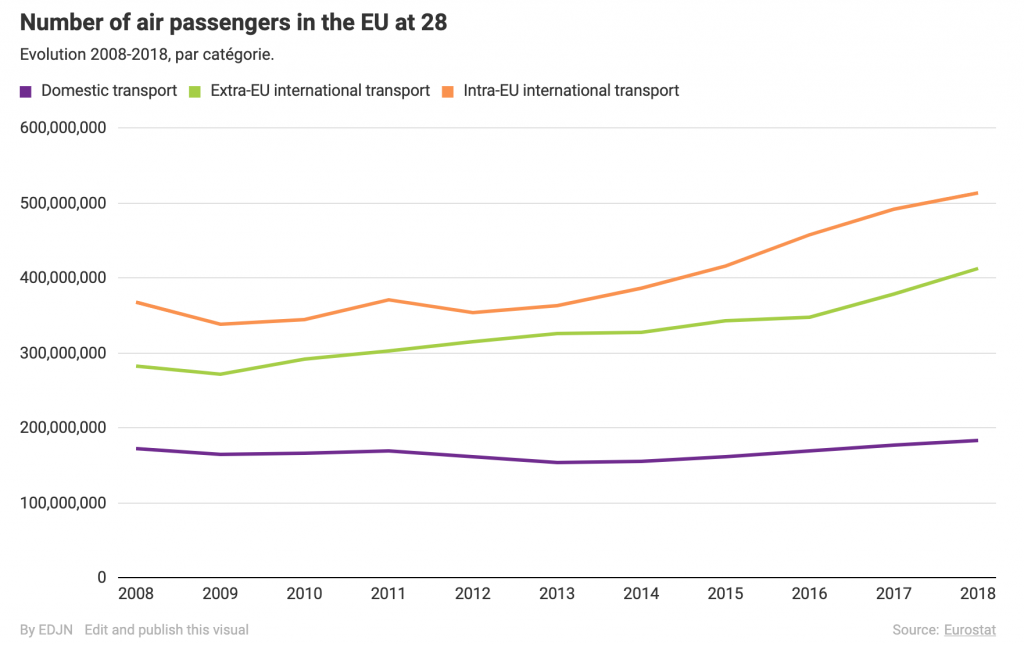 Number of passengers in the EU-28.

The growth is clearly noticeable at European airports, which have reported new passenger records almost every year.

In 2018, Europe’s busiest airport, London Heathrow, welcomed 80 million people. And the airport in Frankfurt, which has since become Europe’s main hub for cargo flights, announced shortly before New Year’s Eve that it had broken the 70 million passenger milestone, for which it happily awarded a €1,000 voucher to a family when they checked in.

Yet it is not in Western Europe, but above all in Eastern Europe that people fly more. Lithuania, Slovakia, Poland and Latvia all recorded a healthy increase of over 15%  in traffic compared to the previous year.

And a similar picture is emerging worldwide. Passenger traffic increased by 6.4% in 2017-2018, according to the International Civil Aviation Organization (ICAO), a UN specialised agency.

A total of 4.3 billion passengers boarded an aircraft in 2018, although the actual number of people is likely to be lower, as many people fly several times a year. If the trend continues, by 2040 the 4.3 billion passenger-count will have grown to around ten billion, according to the ICAO. 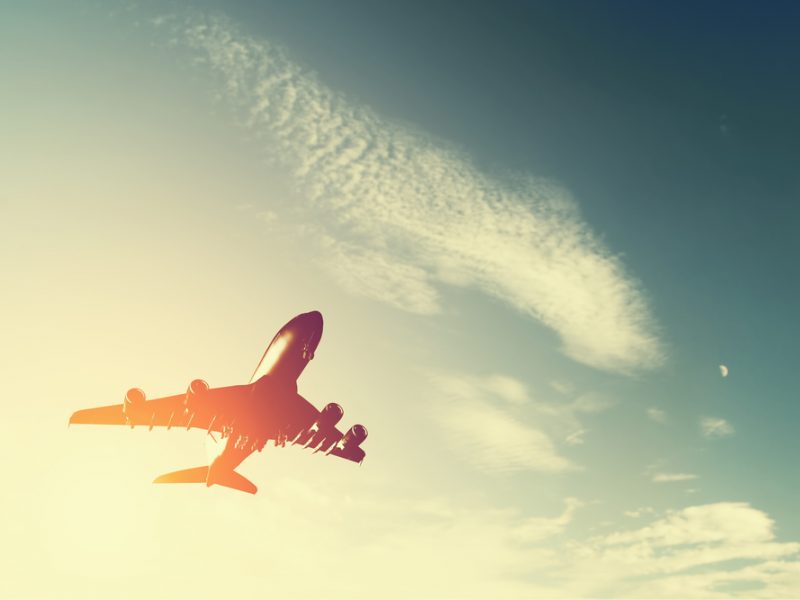 Passenger numbers are one thing, the emissions they cause are another.

Global emissions from air traffic have shot up by as much as 214% compared with 1990. Those emissions have risen despite massive improvements on fuel consumption, which declined by 44% over the same period, according to the German Air Transport Association. 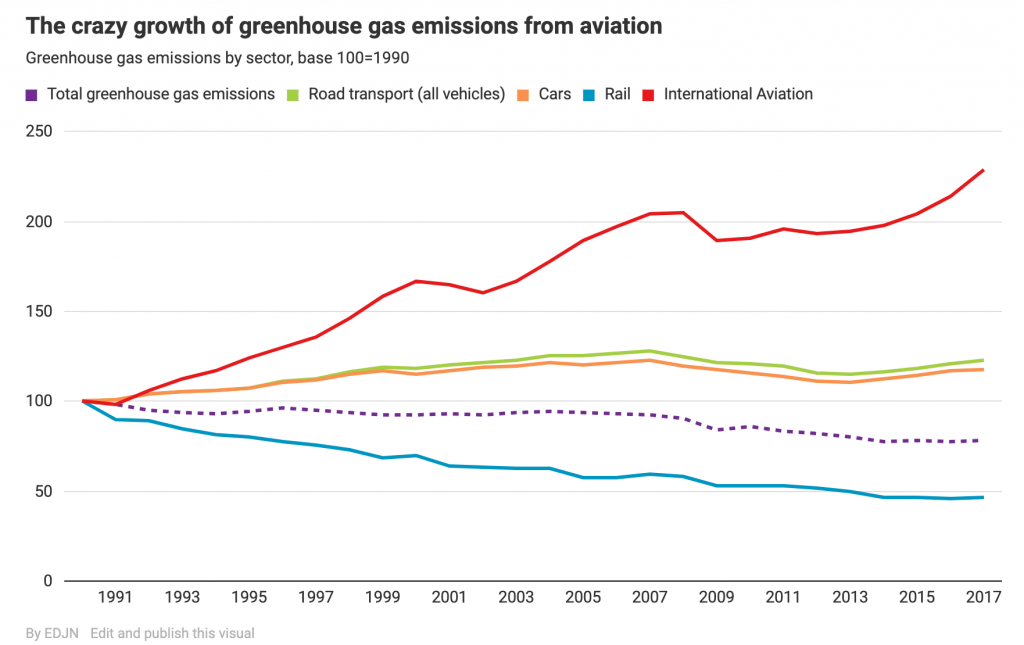 “The crazy increase in greenhouse gas emissions in aviation”

Within the EU, only 3.9% of greenhouse gases are attributable to the aviation sector. But at the altitude at which aircraft fly, carbon dioxide, nitrogen oxides and water vapour develop a much stronger greenhouse gas effect than on the ground. The Federal Environment Agency assumes a two to fivefold effect.

And in view of the increasing number of passengers, flight emissions will continue to rise. By 2040, the European Aviation Safety Agency predicts emissions could grow by 42% within the EU-EFTA area.

In order to keep the environmental damage caused by growing air traffic in check, ICAO agreed in 2016 on the so-called Carbon Offsetting and Reduction Scheme for International Aviation (CORSIA) agreement, which is to apply from the end of the year.

The scheme will allow airlines to offset their emissions through CO2 compensation measures, for example by planting trees. The aim is for the aviation sector to grow “climate-neutral” from 2021.

But whether this will be enough to achieve the EU’ s climate targets is still unclear.

In 2021, the EU will have to decide whether international flights should continue to be excluded from the EU’s emissions trading scheme (ETS) or whether other measures should be taken. So far, only intra-European flights are subject to the EU scheme, and airlines currently receive 85% of their CO2 certificates for free.

A reform of the ETS is due next year and European Commission President Ursula von der Leyen has already signalled that free certificates for airlines will be significantly reduced.

The Federal Association of the German Aviation Industry finds this counterproductive and is instead focusing on renewable fuels for air travel. Although CO2-neutral flights are theoretically already be possible now, it will probably take years before renewable fuels are available in sufficient quantities and at reasonable price. 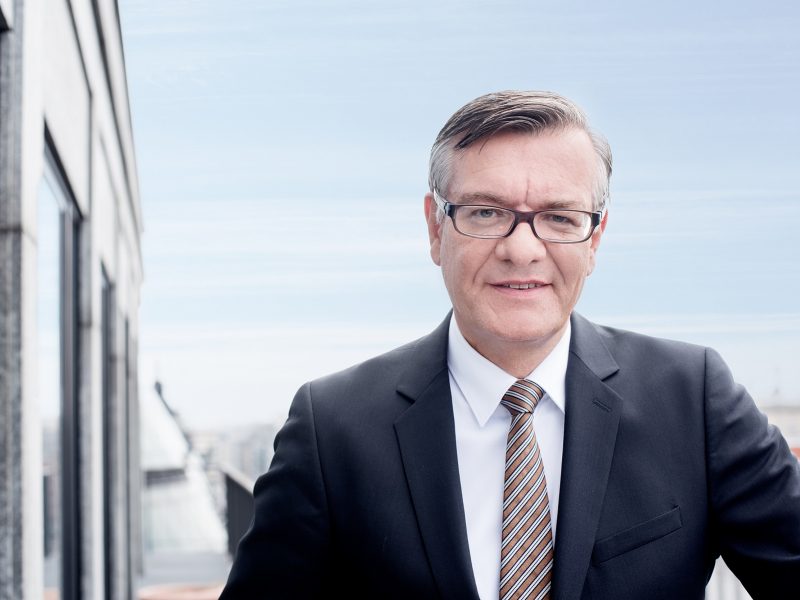 In an interview with EURACTIV Germany, Matthias von Randow, the Chief Executive Officer of the Federal Association of the German Transport Industry, spoke about carbon-neutral aviation fuels and the difficulties of rolling them out on a mass scale.

Whether “flight shame” will prevail and people will actually fly less remains to be seen.

But the signs point to at least a slight change: Swedish airlines recorded an 8% drop in domestic flights in 2019. And according to a study by Swiss bank UBS, over 20% of people are already deliberately flying less.

If the “flight shame” trend takes hold, the boom in the airline industry could at least be halved, UBS said.