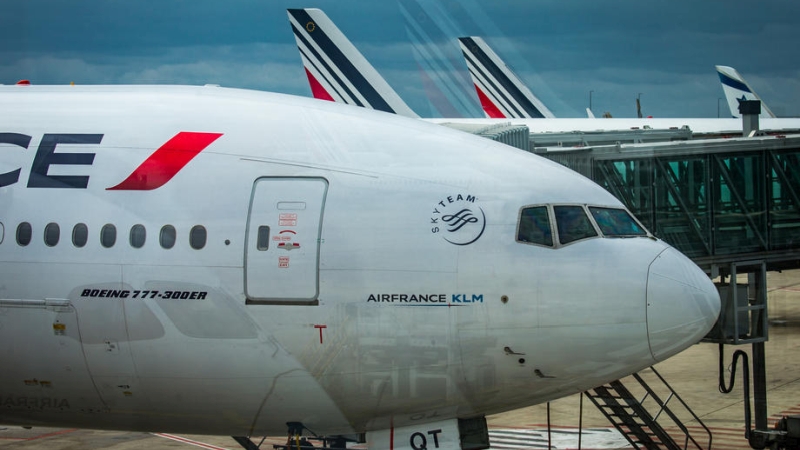 The European Union has urged its airlines to avoid Belarus and its airspace amid outrage over Sunday’s forced landing in Minsk of a Ryanair jet en route to Lithuania from Greece and the arrest of a dissident journalist on board. [EPA-EFE/CHRISTOPHE PETIT TESSON]

Air France cancelled a Paris-Moscow flight on Wednesday (26 May) after Russia failed to approve a new route bypassing Belarus, the airline said.

The French carrier, part of Air France-KLM, scrapped flight AF1154 “for operational reasons linked to the bypassing of Belarusian airspace, requiring a new authorisation from the Russian authorities to enter their territory”, a spokesperson said.

The European Union has urged its airlines to avoid Belarus and its airspace amid outrage over Sunday’s forced landing in Minsk of a Ryanair jet en route to Lithuania from Greece and the arrest of a dissident journalist on board.

Air France, which operates several weekly services to Moscow, said it still planned to run its next scheduled Moscow flight on Friday, subject to Russian approval of a flight plan that would allow it to avoid overflying Belarus.

Passengers on the abandoned flight have been assisted at Paris Charles de Gaulle, it said. “Air France regrets any inconvenience caused by this situation.”

The airline has encountered no problems with other flights passing over Russia after avoiding its ally Belarus, or with a Wednesday Paris-St Petersburg service that arrived on schedule.

But France is among countries taking a tough line over a Belarus warplane intercepting the Ryanair flight, including the suspension of Belarusian national carrier Belavia’s operating rights.

Within hours of the Air France cancellation, Belavia flight 2869 to Barcelona was forced to turn around and return to Minsk after Poland said it would not be able to enter French airspace.

The United States and western European members of the UN Security Council have called for the International Civil Aviation Organization (ICAO) to investigate Belarus’ diversion of the Ryanair flight.

Their call came hours after a defiant President Alexander Lukashenko on Wednesday defended the action, lashing out at critics at home and abroad.

In his first public statement since the Ryanair flight was diverted and opposition journalist and activist Roman Protasevich was arrested on Sunday, Lukashenko dismissed the subsequent international outcry.

“I acted lawfully to protect our people,” Lukashenko said in an address to parliament.

The criticism was nothing more than another attempt by his opponents to undermine his rule, he said, accusing them of waging a “modern, hybrid war” against Belarus.

“Our ill-wishers at home and abroad have changed their methods of attacking the state,” Lukashenko said, accusing them of crossing “red lines” and “boundaries of common sense and human morality”.

But he continues to enjoy solid support from Russian President Vladimir Putin, who is hosting the Belarusian leader on Friday.

Putin’s spokesman Dmitry Peskov said Wednesday there was no reason to disbelieve Lukashenko’s version of events.

The Belarus strongman and his allies are under a series of Western sanctions over a brutal crackdown on mass protests that followed his disputed re-election to a sixth term last August.

European leaders, who accuse the authorities in Minsk of effectively hijacking the passenger flight, this week agreed to cut air links with Belarus and told airliners to avoid the country’s airspace.

The Belarusian opposition has called for stronger measures.

The Athens-to-Vilnius flight was diverted over a supposed bomb scare, with Lukashenko scrambling a MiG-29 fighter jet to accompany the aircraft.

Belarus has released a transcript of communications between Minsk air traffic control and the Ryanair flight, in which the crew was told “you have (a) bomb on board” and urged to land in Minsk.

Lukashenko denied on Wednesday that the fighter jet had forced the airliner to land, calling such claims an “absolute lie”.

Ukraine, Poland, and Lithuania had denied the Ryanair flight permission to land and its only option was to turn to Minsk, he said.

Once the plane landed, Protasevich – the 26-year-old co-founder of opposition Telegram channel Nexta, which coordinated last year’s protests against Lukashenko – and his Russian girlfriend Sofia Sapega were arrested.

He appeared in a video on Monday in which he confessed to helping to organise mass unrest, a charge that could land him in jail for 15 years.

Sapega, a 23-year-old law student at the European Humanities University (EHU) in Lithuania, appeared in another video on Tuesday, saying she worked for a Telegram channel that disclosed information about Belarusian law enforcement.

Her lawyer said she had been remanded in pre-trial detention for two months and Russia confirmed she was being detained as a criminal suspect.

Belarus’s opposition says such videos are routinely recorded by security forces, with participants forced to make statements under duress.

“They’re going to kill him”

Protasevich’s mother told AFP in Poland that she had not slept since he was arrested.

“They’re going to kill him in there.”

His father Dmitry Protasevich said that his son’s lawyer was told that the journalist was not in his detention cell.

“We think that he may be in hospital,” he told AFP. “We believe his life and health could be in danger.”

EU leaders warned on Monday (24 May) they would adopt further “targeted economic sanctions” against the Belarusian authorities to add to the 88 regime figures and seven companies on a blacklist.