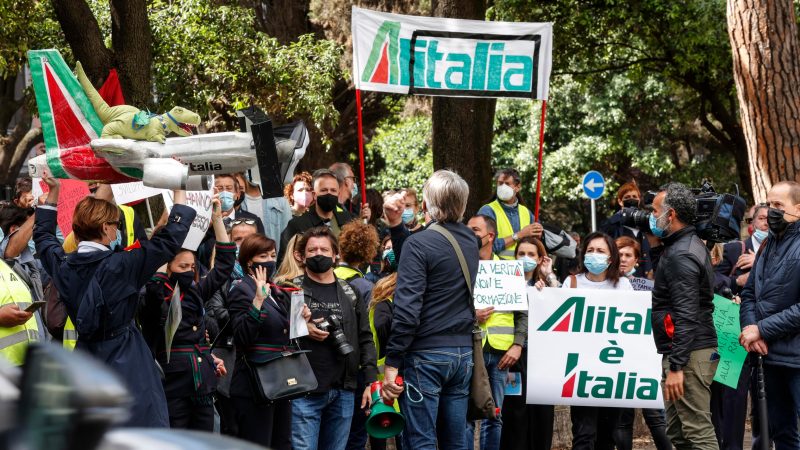 File photo. Italian airline Alitalia employees in front of the State broadcaster RAI's headquarters, protesting against the government's new plan that provides for the reduction of the flight company and the change of name, in Rome, Italy, 13 May 2021. [EPA-EFE/GIUSEPPE LAMI]

Italy has reached a deal with the European Commission over the launch of carrier Italia Trasporto Aereo (ITA), which will replace the loss-making, state-owned Alitalia, the Treasury said in a statement.

It said the new company would be fully operational from 15 October, adding that the “constructive and balanced” deal would open the way for a planned capital increase for ITA.

Italy’s governing coalition last year set up a plan under which the company was supposed to start operating in early April in place of Alitalia.

But Brussels and Rome have held lengthy talks over the fate of Alitalia and its successor, demanding that ITA should be independent of the former so as not to be liable for Alitalia’s billions of euros in state aid received in recent years.

The negotiations delayed the launch by several months, allowing rival carriers including Ryanair and Wizz Air to snap up domestic routes in Italy.

A separate statement from the industry ministry said that 2,800 Alitalia employees could be hired by ITA this year and a further 5,750 in 2022. Alitalia has some 11,000 employees.

The statement said Alitalia would stop operating on 15 October and that all passengers holding Alitalia tickets to travel after that date would be offered alternatives.

“With ITA a new important Italian airline, with significant development perspectives and capable of competing in the national and international market, is born,” Transport Minister Enrico Giovannini said.