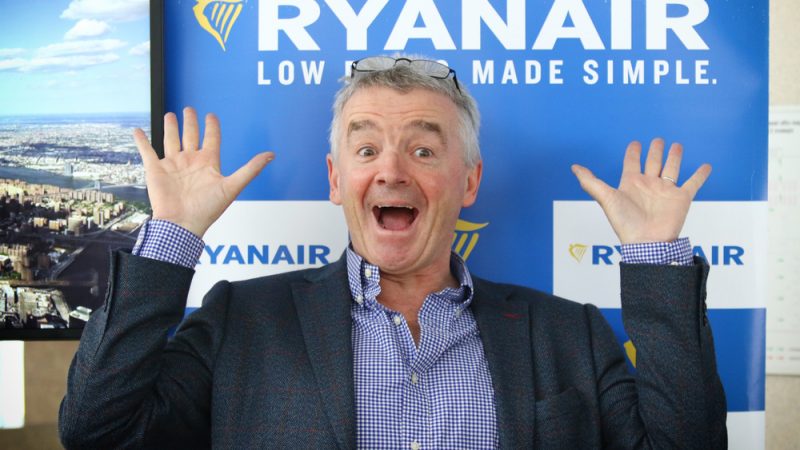 According to Emissions Trading System (ETS) statistics released on Monday (1 April), Ryanair now places tenth on a list that was previously the exclusive domain of Europe’s coal-fired power stations.

The Irish airline made the ranking despite a difficult 2018 in terms of industrial action, which normally brings down emissions due to lack of activity. CO2 output actually increased 7% to 9.9 million tonnes.

Responding to the news, Ryanair said in a statement that it “is Europe’s greenest and cleanest airline. Passengers travelling on Ryanair have the lowest CO2 emissions per km travelled than any other airline.”

The airline is arguably at a disadvantage compared to others, given that Ryanair is a short-haul operator that flies almost exclusively within Europe. As a result, almost all of its emissions are subject to the ETS, unlike British Airways, Lufthansa and other flag-carriers.

Overall ETS emissions actually declined by 3.9% thanks almost entirely due to reduced use of coal power.

Since 2013, there has been an increase of nearly 25% and an in-depth stock-take in January showed that the number of passenger kilometres has skyrocketed, cancelling out advancements in engine technology and fuel efficiency.

Today’s figures tell only part of the story, as they only cover intra-EU flights. When global emissions are taken into account, the total amount of emissions is likely to be even greater.

Clean mobility group Transport & Environment said in a statement that: “when it comes to climate, Ryanair is the new coal. This trend will only continue until Europe realises that this undertaxed and under-regulated sector needs to be brought into line.”

Aviation continues to enjoy tax-free status when it comes to fuel, no value-added tax is charged on tickets and airlines are eligible for free carbon permits under the ETS.

T&E added that “it is no surprise that the most undertaxed mode of transport is also the one with the fastest growing CO2 emissions” and called for the sector’s permits to be withdrawn.

The tax situation could change though, after Belgium, the Netherlands and France all suggested that kerosene levies and VAT on tickets could be options to help cut transport sector emissions.

At a meeting of environment ministers in March, Belgium insisted on a debate on the issue, suggesting that the discussions would “allow the next European Commission to make adequate proposals”.

Taxation matters are an exclusive competence of the EU’s member states, so attempts to impose EU rules would need unanimous approval from all 28 capitals.

But tax could soon become an easier area in which to manoeuvre, as the Commission has proposed scrapping the unanimity requirement from certain policy areas, including environmental matters.

A recent long-term climate strategy published by the EU executive, meant to show Europe how it can stick to the Paris Agreement, insists that taxation remains one of the most powerful tools available.