For how long will flying less remain the best way to reduce aviation’s climate impact? 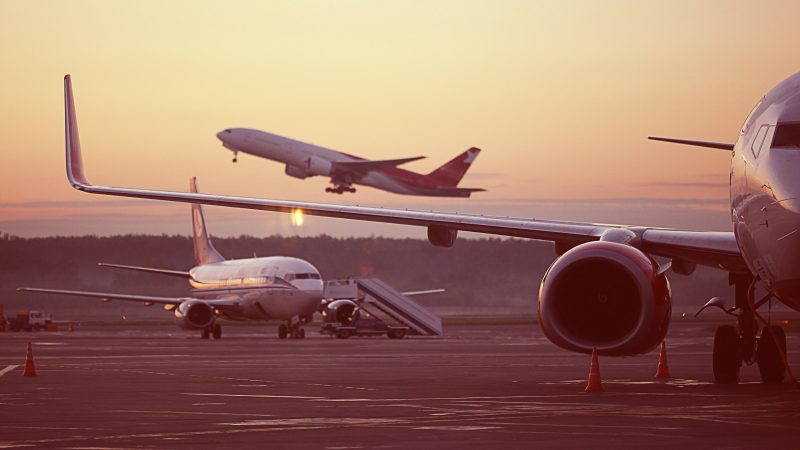 Aviation emissions need to fall now, but the technical solutions to achieve this will take time. [Kichigin / Shutterstock.com]

While technological solutions may cut aviation emissions in the future, flying less is the best option to reduce our climate impact now, writes Andrew Murphy.

Andrew Murphy is the aviation director at the clean mobility NGO Transport and Environment.

The reality is, both of these views are correct.

That legislation, called the Fit for 55 package, finally gets to the root of the problem: better pricing of aviation emissions and developing alternative fuels to replace fossil kerosene.

European co-legislators could bring the package a step forward by also using it to address aviation’s non-CO2 climate effects, and supporting the deployment of zero-emission aircraft.

But even with the best will in the world, sustainable fuels will take time to be scaled up.

There aren’t enough existing feedstocks for sustainable aviation fuels (SAF) lying around waiting to be used, and a dash for higher targets would result in airlines filling up with unsustainable animal fats, crop biofuels and fraudulent used cooking oil.

Production of the most promising alternative fuels based on renewable electricity, known as e-kerosene, will only scale up towards the end of this decade.

And new electric and hydrogen aircraft are exciting prospects, but likewise will take time to come to market. Solutions to aviation’s non-CO2 effects are also increasingly viable, but also need time to be developed and deployed.

We now face a conundrum. Aviation emissions need to fall now, but the technical solutions to achieve this take time.

Thankfully, the COVID crisis has shown that while technology is scaled up, we have ways to immediately reduce the climate impact of flying.

What the pandemic showed was that while aviation as a sector was crucial, not every flight ever taken was. Physical connectivity isn’t always essential to economic growth and employment, and not every corporate deal needs face to face meetings.

With this knowledge, Transport & Environment (T&E) has revised its forecasts in its new Roadmap to climate neutral aviation for the mix of demand management and technology deployment needed to bring aviation in line with our climate goals.

Our key finding is that for the rest of this decade, the only way to reduce emissions from flying substantially is to reduce flying.

Why do we say this? The first point to make is that there are relatively easy ways to reduce emissions through demand management if we target the right flights and fliers.

1% of the global population is responsible for 50% of emissions from flying, and a big share of this, about 30% in Europe, comes from corporate flyers. A golden window exists right now for top corporate executives to decide to align their travel policy with their climate commitments.

The pandemic has shown that a 50% reduction in corporate travel is more than possible.

Such a reduction can cut CO2 emissions by as much as 32.6 MtCO2 by 2030, equivalent to taking 16 million polluting cars off the road.

We know that the vast bulk of emissions comes from (corporate and leisure) long-haul flights. Substituting long-haul corporate travels by videoconferencing, and switching from long-haul to short-haul holiday trips would have serious gains for the climate.

The second point is that demand management isn’t a “forever solution”. It’s the best solution for now because the sector has dragged its feet in deploying in-sector emission reductions.

To many of us working in this area, it seems like airlines spent more money opposing climate measures than supporting new technologies.

Much more time was spent pushing offsetting as a solution, or believing that the flawed UN aviation agency ICAO would do the job. There are consequences for the failure to deploy the innovation needed to decarbonise the sector.

Our analysis shows that if we step up the deployment of innovative fuels and require manufacturers to sell zero emission aircraft, then over time, demand management recedes as the most effective way to reduce emissions.

However, for that to occur, a fundamental shift from industry is needed.

Rather than using their recently adopted net zero pledges as the basis for lobbying for more effective climate measures, many of them are doing the opposite: using them as cover to oppose the very measures that are being proposed to reach such a target. We’ll be exposing more of these anti-climate tactics in the near future.

This sort of short term thinking is incredibly counterproductive and goes against the optimistic findings of our report: that the technology solutions are actually deployable, and can save the industry’s future.

Rather than seeing climate measures as a threat, the entire aviation industry should look to them as their best pathway to an economically and environmentally sustainable future.

That means using their substantial lobbying power to strengthen, not weaken, the proposed legislation.

They should use their technical expertise to help address complex aspects such as non-CO2 effects and provide clearer timelines for deploying zero emission aircraft.

Some in the industry are understanding this already, the others need to follow suit.

We can be optimistic about the possibilities of sustainable aviation, but we shouldn’t be naïve about the challenges.

Those challenges will be overcome through support for innovators and those providing solutions, not by listening to those who have worked so hard against climate measures.

The sooner we do this, the sooner new technologies will overtake flying less as the most effective way to reduce aviation’s emissions.