Ryanair has been accused of receiving an unfair economic advantage in several EU countries. [Mikel Ortega/Flickr]

Carbon from all sectors in the EU’s emissions trading system decreased in 2016 with one exception: aviation. CO2 from flights within Europe grew 8%, according to figures released last week by the European Commission. Low-fares airlines drove this growth, with Ryanair, Wizz Air, Eurowings and Norwegian all registering double-digit increases in emissions. These airlines are now huge emitters with carbon footprints exceeding those of some small countries. For example, Ryanair’s flights within Europe emit more CO2 than Costa Rica or Cyprus.

Even so, Ryanair’s Michael O’Leary took to the Irish airwaves last week to casually dismiss the overwhelming evidence of climate change as ‘rubbish’. His airline is the biggest aviation emitter in Europe, a position achieved thanks in part to a business model reliant on taxpayer handouts. It will face the biggest challenge if governments take serious action against aviation’s growing emissions. 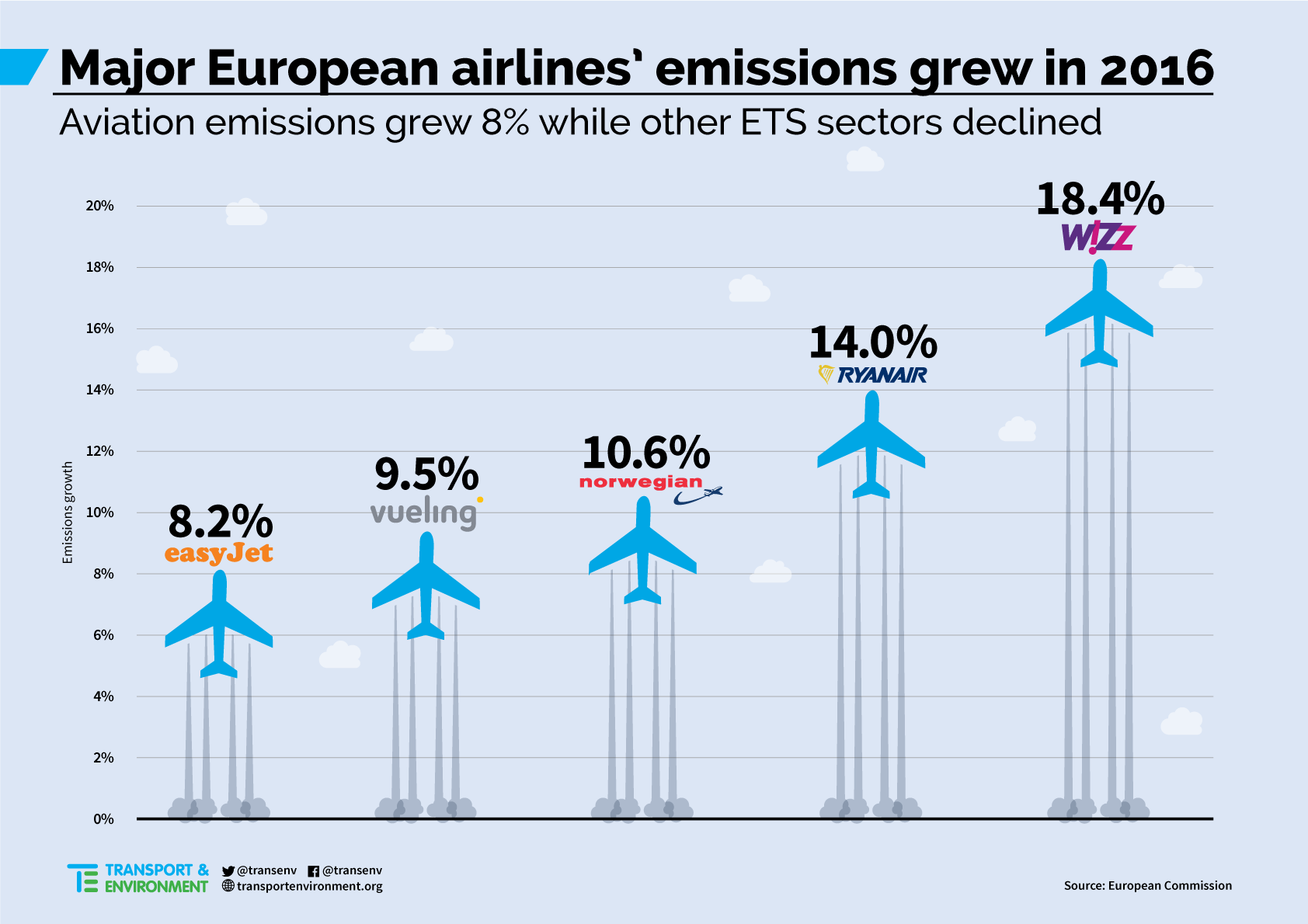 Let’s provide some context for these figures. Last month, the International Energy Agency declared that global emissions flatlined in 2016. This is an important development, but emissions still need to fall rapidly and stop entirely by the 2050s if we are to have any chance of meeting the goals of the Paris Agreement. In this context, a rise of 8% in European aviation emissions in one year alone is of serious concern

However, such growth is not inevitable. The reason aviation emissions continue to grow is because of deliberate policies introduced and supported at all levels of government – regional, national and European. And unless these policies change, aviation will continue to be a growing driver of climate change, undermining action taken by other sectors. Growth in aviation and shipping will undo half of the fuel saving made by cars, trucks and other land transport by 2030.

It’s at European level though that we have the greatest scope to take action. The figures released this week come from Europe’s emissions trading system (ETS), but this only includes flights within Europe. Flights to and from Europe were excluded from this measure due to enormous industry and international pressure – though we can be confident that such emissions are growing also.

That emissions within Europe are included in EU ETS is, of course, an important first step. Carbon from those flights to and from Europe risks being shunted into a very weak and uncertain global agreement – under UN aviation body ICAO – which may not even come into force. However inclusion in the EU ETS comes with huge problems, as the system itself is badly functioning.

Put simply: the EU ETS works in theory, but less so in practice due to problems such as a weak cap on emissions growth and over-allocation of free emission allowances. This is especially true for the aviation provisions in the ETS, where the cap doesn’t even decline and where airlines receive 85% of their allowances for free.

The result is a measure which has only a minimal impact on airlines: a total “cost” of €150 million a year, which compares to the €40 billion annual subsidy the European aviation sector receives from its fuel tax and VAT exemptions. This minimal carbon price does nothing to drive efficiencies in the sector and leaves airlines and airports confident that they can continue to expand without having to pay anything for their climate damage.

Luckily, the aviation EU ETS provisions are currently under revision, and MEPs and member states have an opportunity to fix some of the major flaws.

The European Commission took an important first step in proposing a declining cap for aviation from 2021 onwards. However much more is needed. The scope of the measure needs to be expanded to cover all flights to and from Europe, at least until 2021 when a global measure may come into operation. There also needs to be a huge reduction in free allowances granted to airlines, so that the sector pays its way. Finally, the general revision of the EU ETS, also underway, needs to remove the huge surplus of allowances which has built up in the system.

Our indifference to aviation emissions is driving climate change. Aviation emissions have grown from 1.5% to 4.5% as a share of European emissions between 1990 and 2015, and that share will grow even more unless real action is taken. That starts with fixing the EU ETS, which will remain the test as to whether this sector will contribute its fair share to Europe’s climate efforts.