The UN is having another go at addressing the climate impact of flying next week as its aviation agency, ICAO, meets in Singapore. ICAO’s environment committee is having yet another discussion on the offsetting scheme for aircraft CO2 emissions – known as CORSIA – and the rules for airlines to report their emissions, which need to be finalised by year’s end.

Air travel is today responsible for 5% of man-made climate change, and NGO observers at ICAO are focused on the need for the aviation sector to get serious about the Paris agreement and decarbonisation. We have good reason to be worried.

CORSIA fails the Paris test miserably: some major states have not signed up to what is a voluntary scheme; there are unresolved concerns about states and airlines double counting emissions reductions; and it has insufficiently robust criteria to ensure offset projects really deliver the emission reductions promised.

The graph below shows in blue a forecast of aviation’s CO2 emissions from 2015 accumulated to 2050. CORSIA will cover a mere 6%. But that’s only CO2. Since the climate warming effects of aviation non-CO2 (NOx emissions at altitude, cloud formation and soot particles) exceed those of accumulated CO2 on a daily basis, the impact will be much less – negligible, in fact. Undeterred, ICAO and industry have the chutzpah to argue that CORSIA is only an interim measure until 2035 – when biofuels, operational measures and standards will complete the job. 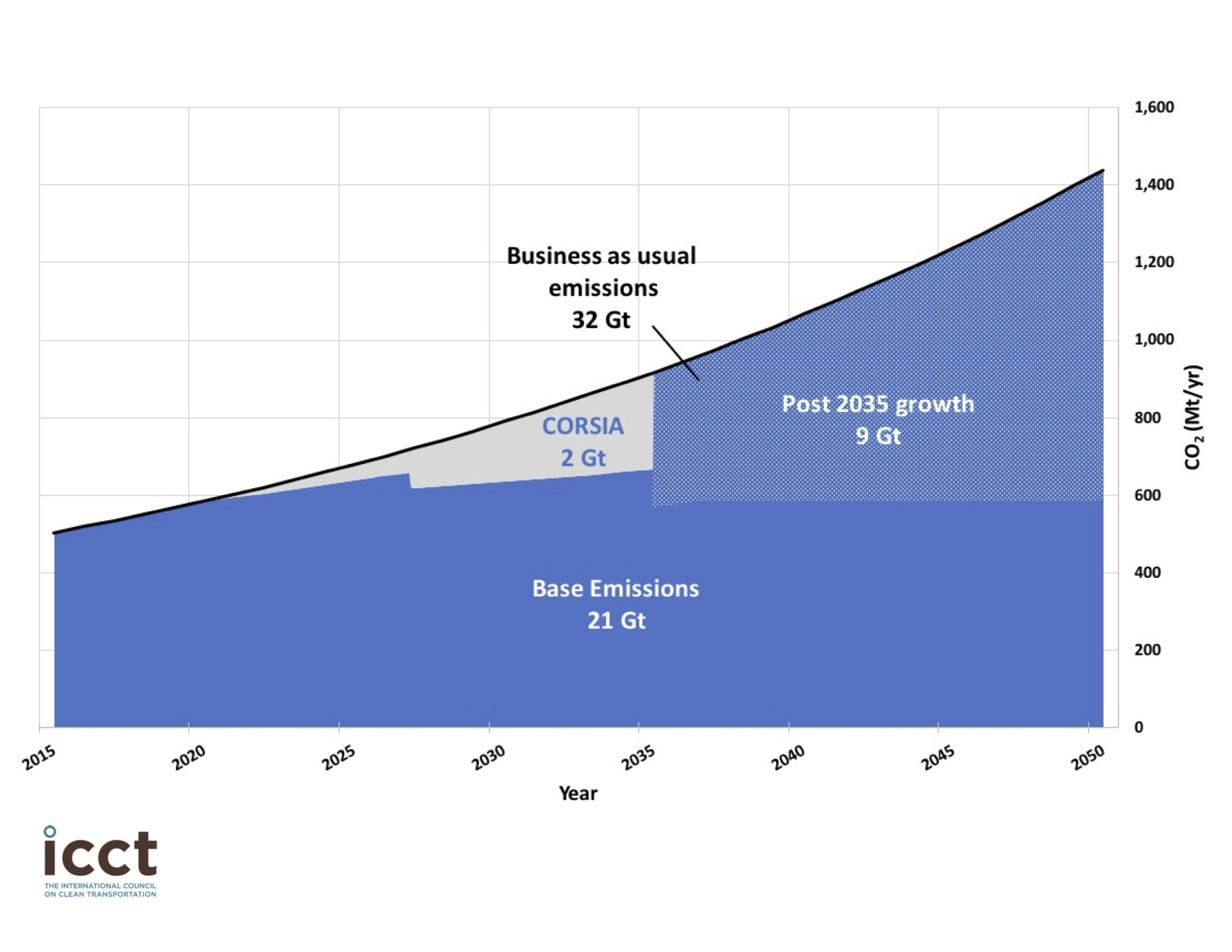 ICAO recognised as early as 2007 that goals of greater ambition were needed. The 2016 ICAO assembly confirmed the need to “continue to explore the feasibility of a long-term global aspirational goal for international aviation…” and report progress to the assembly in 2019. Two years later, the work has hardly started. In the meantime the UN’s equivalent body for shipping, the IMO’s environment committee, has met three times since ICAO’s September 2016 assembly and convened three special meetings to consider shipping’s response to Paris. The outcome? A global agreement last April requiring shipping to reduce its emissions in-sector by at least 50% by 2050.

This long-term ambition work should obviously have high priority but ICAO’s environment committee feels it needs to respond to demands from US entrepreneurs and the Trump administration to certify a new generation of small and business-jet type supersonic aircraft under development. The 2016 ICAO assembly recognised that new generation supersonics should only be allowed to fly if the general public accepted them, but it’s not clear what that means; all ICAO certification work is conducted in secret. So how would the general public know?

European governments have long fought for tougher ICAO noise standards for aircraft (airport  noise is a bigger problem in Europe) and won’t give new supersonics an easy ride – particularly on the sonic boom.

But on climate it seems to be a different story. Speeds beyond Mach1 require very much greater thrust than subsonic aircraft of a similar size with fuel burn potentially several to many times greater. This is simple physics. But European ministers seem to have ignored our calls to apply existing subsonic CO2 standards to supersonic aircraft. Supersonic planemakers want regulators to wait until these aircraft are flying and providing real data before setting standards – but by that stage an industry will have been created, and it’s for sure that strict standards will not be set. NGOs will say at Singapore “no special treatment – apply subsonic standards”. 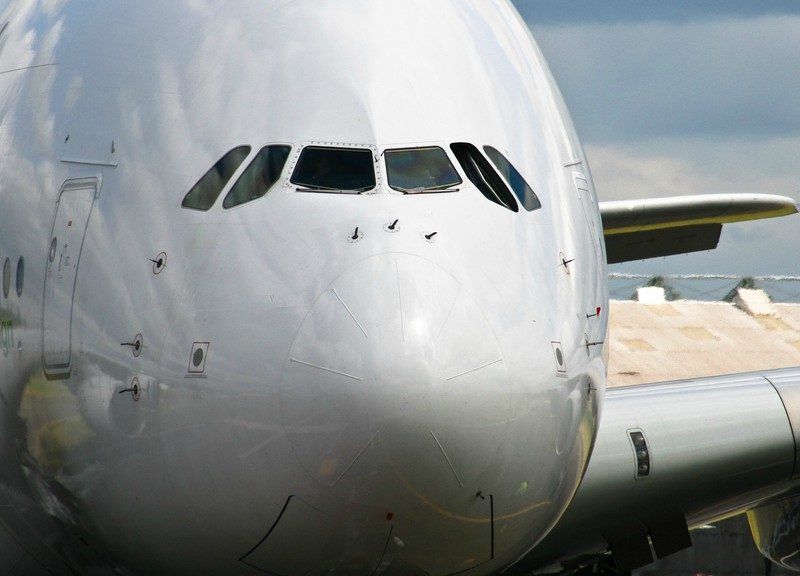 All – and I mean all – documents are secret with public disclosure being punished with swingeing penalties. T&E is also an observer at the IMO. What a contrast. After meetings, all documents are up on a public website. To find out what happened at ICAO you need to fork out $250 for a sanitised record. The NGO coalition observing ICAO wants all these counterproductive rules reviewed and the process opened up to the public.

Laws bind car manufacturers, refrigerator producers, real estate agents, etc. to show publicly the CO2 rating of their products, but an ICAO confidentiality edict prevents you from being able to identify cleaner aircraft – even though flying is by far the most carbon intensive way of travelling.

ICAO classes as commercially sensitive every word, document and policy position that states and others might put forward on any environmental or climate matter. That’s a breach of the Rio principles and the Aarhus convention. And transparency matters. Experts on ICAO’s environment committee worked intensely for two years on sustainability criteria for biofuels – only for the ICAO council to chuck nearly all of them out on political grounds. Behind closed doors, of course. Now we hear that biofuels are going to be redefined by ICAO to include fuels of fossil origin!

Rather than let the general public judge for themselves about all this, ICAO and too many of its members would rather you believe what they say rather than what they do. This situation must change. 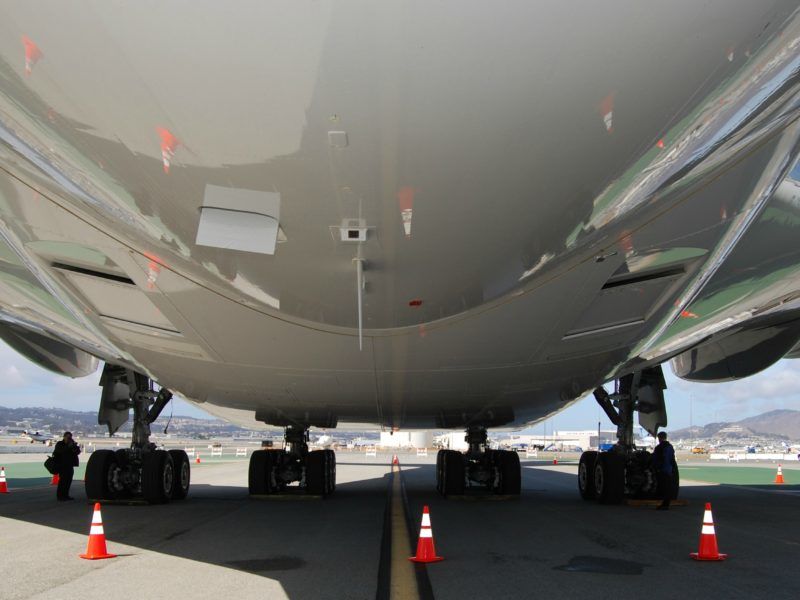