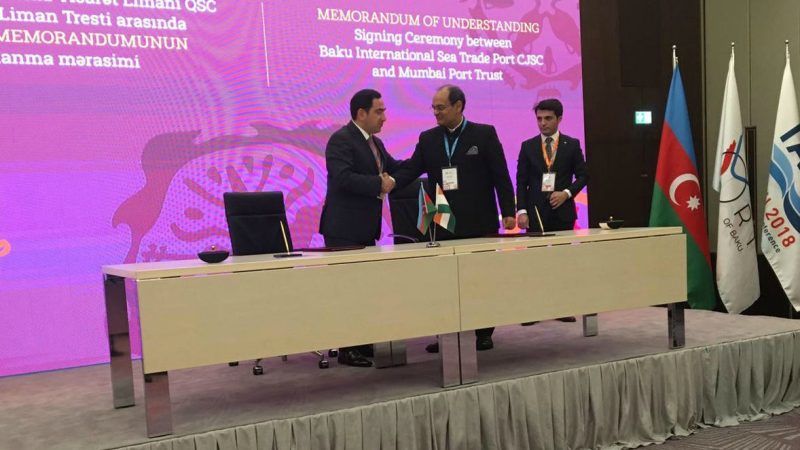 The Baku International Sea Trade Port has signed a number of documents on cooperation with foreign partners. [@azmissiongeneva Twitter]

At the heart of a 21st-century silk route connecting Asia and Europe, Baku is the natural geographic meeting point for east and west. An ancient city on the original silk road, the city now has its eyes on becoming a free trade zone modelled on Dubai.

Nearly 400 delegates gathered in the Azeri capital for the annual International Association of Ports and Harbours (IAPH) this week, less than a fortnight after it hosted the latest round of the Formula One world championship.

IAPH BAKU 2018 is officially announced open. Take a look at the best photos of the Opening Ceremony.#IAPHBaku2018 #portofbaku pic.twitter.com/dFUhQ98qkh

“Azerbaijan is very well-placed to play a key role in linking Europe and Asia and the European Union will continue to support the Port of Baku in becoming an international logistics and trade hub,” said Hahn.

European Commission representatives were at the Baku conference, touting the funding instruments offered under its TEN-T transport infrastructure programme, and offering the prospect of loans from the European Fund for Sustainable Investment and the European Investment Bank.

But it is hard to ignore the perception that South-East Asia appears to have jumped ahead. China’s ‘Belt and Road’ initiative consisting of overland road and rail routes, will bring oil and gas from China to Europe. Committed funding to these infrastructure projects across Eurasia is now $1.2 trillion.

“They count very much on this Chinese strategy – the maritime belt and rail strategy – and as a hub on the Caspian Sea, they have that potential as well,” Patrick Verhoeven, managing director of the IAPH told EURACTIV.

“Here we are just one of a number of players,” an EU official said.

But European delegates are also aware of the opportunity that is offered by opening up trade links with the east.

“I’m not sure that Europe is being left out,” says Verhoeven.

There are now 66 #beltandroad countries who each have a view on what the concept means. More and more countries are interested, but Chinese firms are more cautious to participate #iaphbaku2018 @portofbaku pic.twitter.com/qCBsZiSbgA

“The real issue is how does the east look towards Europe and what is going to be the main gateway. It will predominantly remain maritime but you also have a land connection coming. “

“The fact that Cosco has bought terminals in Greece changed the whole perspective of where the gateway to Europe is,” he added.

Baku International Sea Trade Port in the Alyat settlement will soon be commissioned, while the launch of the Baku-Tbilisi-Kars railway has expanded the transport capabilities of Azerbaijan and the South Caucasus region.

“in the energy sector, it has huge potential to grow even further and from a diversification point of view that is important to the European Union that we can further increase our imports of energy from Azerbaijan,” MEP Sajjad Karim, co-chair of the EU-Azerbaijan Parliamentary Co-operation committee, told EURACTIV.

“But it also has the opportunity to be a real transport hub and a link between east and west, north and south. These are the ambitions that it has, and it’s certainly in Europe’s interest to be part of the attainment of those ambitions,” he adds.