A frame grab from handout video provided by the Ministry of Defence of the Republic of Azerbaijan allegedly shows an Armenian tank being destroyed by Azerbaijan's military at the so-called Nagorno-Karabakh Republic, on the border of Armenia and Azerbaijan, 27 September 2020. [Handout video/EPA/EFE]

The worst skirmishes since 2016 have raised the spectre of a fresh war between the ex-Soviet rivals, locked since the early 1990s in a stalemate over the Armenia-backed breakaway region of Nagorno-Karabakh.

Seventeen Armenian separatist fighters were killed and more than 100 wounded in the fighting, the so-called President of the internationally unrecognized region of Karabakh Arayik Harutyunyan said, conceding that his forces had “lost positions”.

“We are tired of Azerbaijan’s threats, we will fight to the death to resolve the problem once and for all,” Artak Bagdasaryan, 36, told AFP in Yerevan, adding that he was waiting to be conscripted into the army.

Karabakh separatists said one Armenian woman and a child were killed, while Baku said that an Azerbaijani family of five died in shelling launched by Armenian separatists.

Azerbaijan claimed it captured a strategic mountain in Karabakh that helps control transport links between Yerevan and the enclave.

“We are on the brink of a full-scale war in the South Caucasus,” Pashinyan warned. 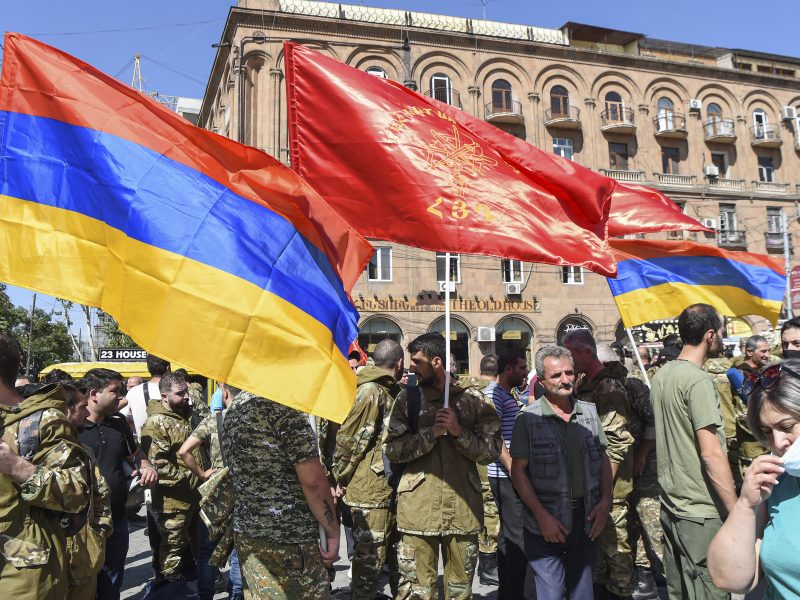 European Council president Charles Michel called Sunday (27 August) for a halt to fighting between Armenian and Azerbaijani separatists over the Nagorno-Karabakh region and an “immediate return to negotiations”.

“Military action must stop, as a matter of urgency, to prevent a …

French President Emmanuel Macron expressed his “deep concern” on Sunday, and “strongly called for an immediate end to hostilities”.

UN Secretary-General António Guterres said he was also “extremely concerned” and urged the sides to stop fighting and return to talks.

The US State Department said it had contacted the two countries and called on them to “use the existing direct communication links between them to avoid further escalation”.

Russian President Vladimir Putin discussed the military flareup with Pashinyan and called for “an end to hostilities”.

But Azerbaijan’s ally Turkey blamed Yerevan for the flare-up and promised Baku its “full support”.

“The Turkish people will support our Azerbaijani brothers with all our means as always,” Turkish President Recep Tayyip Erdoğan tweeted.

Azerbaijan accused Armenian forces of violating a ceasefire, saying it had launched a counter-offensive to “ensure the safety of the population”, using tanks, artillery missiles, combat aviation and drones.

“Our cause is just and we will win,” he said, echoing a famous quote from Soviet dictator Joseph Stalin’s address at the outbreak of World War II in Russia.

According to international law, the territory of Nagorno-Karabakh indeed belongs to Azerbaijan.

Both Armenia and Karabakh declared martial law and military mobilisation. Azerbaijan imposed military rule and a curfew in large cities.

Azerbaijan’s foreign ministry said there were reports of dead and wounded. “Extensive damage has been inflicted on many homes and civilian infrastructure,” it said.

Ethnic Armenian separatists seized the Nagorno-Karabakh region from Baku in a 1990s war that claimed 30,000 lives.

Talks to resolve one of the worst conflicts to emerge from the 1991 collapse of the Soviet Union have been largely stalled since a 1994 ceasefire agreement.

France, Russia and the United States have mediated peace efforts as the “Minsk Group” but the last big push for a peace deal collapsed in 2010.

“We are a step away from a large-scale war,” Olesya Vartanyan of the International Crisis Group told AFP.

“One of the main reasons for the current escalation is a lack of any proactive international mediation… for weeks.”

On Sunday morning, Azerbaijan started bombing along Karabakh’s frontline including civilian targets and in Stepanakert, the Karabakh “presidency” said.

The rebel defence ministry said its troops shot down four Azerbaijani helicopters and 15 drones, while Baku denied the claim.

In July, heavy clashes along the two countries’ shared border — hundreds of kilometres from Karabakh — claimed the lives of at least 17 soldiers from both sides.

During the worst recent Karabakh clashes in April 2016, around 110 people were killed.