The panellists on Tuesday (8 October) were the ambassadors to the EU of two countries from the Eastern Partnership, Azerbaijan and Georgia, and two from Central Asia – Kazakhstan and Uzbekistan.  The EU has separate tracks with both groups of countries, but “connectivity” seems to be the overarching, uniting theme.

Both groups of countries want to capitalise on their geographic and geopolitical position and in the corridors that have started to take shape, largely after China outlined its Belt and Road initiative in 2013. The EU responded last year with a renewed strategy for Central Asia, and the conference also took stock of the first year of the initiative.

The “European way” of building corridors is to increase ‘connectivity’ with Asia on the basis of a rules-based approach. In the EU’s view, connectivity is not only about infrastructure but about internal reform, economic modernisation, promoting sustainable productivity, digital and human contacts.

Representing the Commission, Lawrence Meredith, a director at DG Near, said the East-West corridor’s traditional successes have been on hard connectivity, but environment and climate change could become much more topical.

“Environment knows no borders” Meredith said. He gave as an example the successes of the Commission, together with IFIs, in Ukraine, where massive investment in energy efficiency has led to independence from imported energy. This is not only energy policy, but security policy, he argued.

Another priority, according to the Commission official, is digital connectivity. “We are not yet there. If we had only a fraction of the investment on transport for the digital, that would be a big game-changer,” he said.

“We have massively invested in energy efficiency, underlying the importance for people. With President-elect von der Leyen coming in and rightly underlying the Green Deal, we can expect ever-increased attention on those aspects of connectivity”, Meredith said.

Azerbaijan’s ambassador Fuad Isgandarov said his country’s name was almost always mentioned in the context of energy. Indeed, the Southern gas corridor, to come upstream in 2020, is the first project to bring gas to Europe from the East from a source other than Russia.

“Energy has a limited capacity. Location is forever. That’s why our connectivity policy is going even ahead of our energy policy”, he said. He further focused on the big infrastructure projects of his country, including the new Baku International Sea Trade Port in Alyat.

He said the first free economic zone at Alyat would be operational in a few months, which in his words means new governance, new management in Azerbaijan, as a driver for the country’s progress, including for its accession to the World Trade Organisation and for finalising the bilateral agreement with the EU.

He also mentioned the Baku-Tbilisi-Kars project, a 826-km rail link connecting Azerbaijan, Georgia and Turkey, a freight and passenger link between Europe and China that bypasses Russia.

“We are constructors of bridges,” the ambassador said.

His colleague from Georgia, Natalie Sabanadze, raised the question if corridors were being built as a result of political stability or the other way round.

“Imagine a Southern Caucasus, as a region free of conflicts and tensions, with an integrated market, a well-developed cooperation within the region and with Central Asia – it would be a completely different place, very attractive for foreign investors, but not only – for the people to be and live in. We need to get there, this is the goal,” she said.

The ambassador of Georgia did not mention Russia but said there was only one country that is doing everything for this ‘happy neighbourhood’ not to happen, adding that it was a shame because that country could also benefit from this win-win situation.

She said Georgia has for long considered itself a periphery of Europe and “fought like Don Quixote the windmills of geography and history”. But in many ways, what happens now is that Georgia tries to make the most of its location.

She also argued that the overall development of the region, economic, social and human, is linked to the development of the corridor discussed, and that Georgia, a country with a modest population of 3.7 million, tries to position itself as a transport and logistics hub.

She mentioned the deepwater Black Sea port in Anaklia, the upgrade of the Poti port, the East-West highway of Georgia, and the extension of the EU’s TEN-T programme. She added to this the initiative to improve connectivity in the Black Sea region, including ferry lines between Georgia, Ukraine, Romania and Bulgaria.

‘Not land-locked but land-linked’

The ambassador of Kazakhstan, Aigul Kuspan, also said her country had ambitions to capitalise on its strategic geographical location. “We perceive ourselves not as a landlocked but as a land-linked state,” she said.

“Our strategic approach is to capitalise on the geographic location of Kazakhstan and to link our national infrastructure with those of our neighbours and our global partners”, she continued.

As concrete results, she mentioned the exponential growth of container transport by train via Kazakhstan – an increase of 35% in 2018 compared to 2017.

She gave another example, of the Khorgos dry port at the border with China, the largest of its kind, and the adjacent economic zone, as generating employment and prosperity.

But the ambassador stressed that Kazakhstan did not want to be perceived as a transit route between China and Europe.

She insisted that her country wanted to use the EU expertise to work on the “soft connectivity”, like modernisation, education, digitalisation, standardisation, and thus improve Central Asia’s integration in the global economic system.  In this context, she praised as timely the new EU strategy for Central Asia.

The ambassador of Uzbekistan, Dilyor Khakimov, said that next to the already mentioned Belt and Road initiative, and the new EU strategy for Central Asia, there were other initiatives, including the Russia-led Eurasian economic union, aimed, in his words, at creating a Eurasian single market. 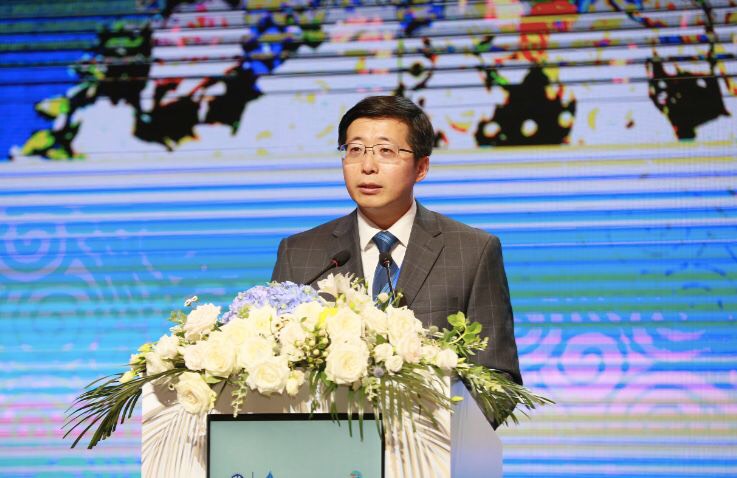 Chinese official: 'Without a strong WTO, connectivity means nothing'

Kahkimov said the initiatives illustrate how important the region had become in a very short time.

Since Uzbekistan opened to the world after President Shavcat Mirziyoyev took over in 2016, his country could not but subscribe to the initiatives of the EU, which saw connectivity as tangible infrastructure, but also as digital connectivity and human contacts, the ambassador said.

Asked to comment on reports that Uzbekistan was preparing to join the Eurasian Union, the ambassador said he had not received any instructions to confirm or deny these reports.

One response to “East-West corridor: ‘Hard’ versus ‘soft’ connectivity?”