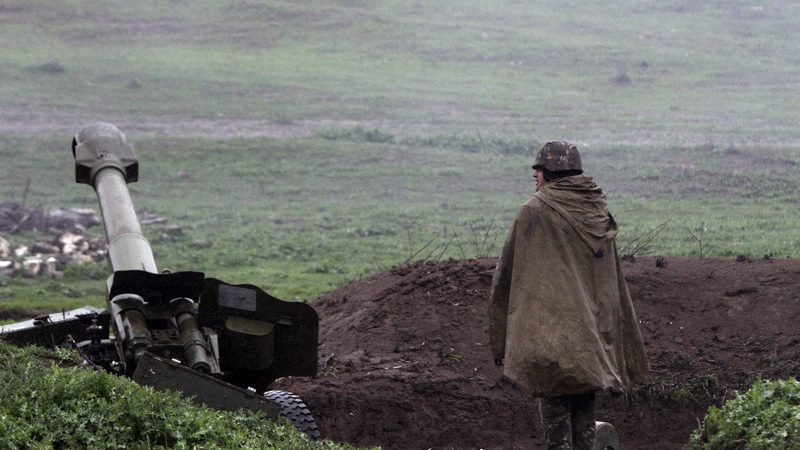 The European Union has called for stopping confrontation after a “serious incident” claimed the lives of three Azerbaijani soldiers at the border between Armenia and Azerbaijan on Sunday (12 July).

Armenia and Azerbaijan are still technically at war over Nagorno-Karabakh, a mountainous region of Azerbaijan that was seized by Armenia-backed separatists who declared independence amid a 1988-1994 conflict that killed at least 30,000 people and displaced hundreds of thousands.

Azerbaijan’s ministry of defence said that two men had died during Armenia’s “attempt to attack using artillery in order to seize our positions” on Sunday, in the region of Tavush. Another Azerbaijani soldier died during hostilities involving the use of heavy weapons that continued through the night.

Armenia, which did not report any casualties, said that Azerbaijan’s political and military leadership bore all responsibility.

Will Russia get involved?

Unlike the “usual” clashes, this time the incident took place at the state border between the two countries, not at the border with the occupied territory of Nagorno-Karabakh. This detail is important, because this time Armenia could invoke Russia’s help under the the Collective Security Treaty Organization (CSTO) of which it is a member. Azerbaijan is not party to the CSTO.

The Belorussian secretary-general of CSTO Stanislav Zas, quoted by the Armenian press, said on Monday he had initiated an extraordinary meeting of the CSTO Permanent Council”.

A EU diplomat who asked not to be quoted told EURACTIV that the moving of the conflict to the Armenia-Azerbaijan border was a “dangerous game”, because of its potential to trigger a wider military conflict. Russia however hardly has an interest to wage a war just to please its Armenian ally, he added.

The President of the Republic of Azerbaijan Ilham Aliyev who chaired a meeting of the country’s Security Council on Monday, said Baku will invite foreign military representatives operating in Azerbaijan to the area so that they can see the situation with their own eyes.

Aliyev’s foreign policy adviser, Hikmet Hajiyev, accused Armenia of starting the fighting for domestic purposes. “Armenia’s leadership aims to escalate the situation, against the backdrop of socio-economic problems deteriorated further by the widespread of COVID-19 in Armenia, caused by its incompetent performance, and distract attention from the domestic problems in the country,” he said in a statement to local media.

Armenia made similar counterclaims. “The aggravation of the situation on the border may be due to the desire of the military-political leadership of Azerbaijan to overshadow the country’s internal problems,” Prime Minister Nikol Pashinyan said.

The EU’s lead foreign affairs spokesperson, Peter Stano, said on Monday that “the EU urges both sides to stop the armed confrontation, refrain from action and rhetoric that provoke tension, and undertake immediate measures to prevent further escalation”.

“This serious ceasefire violation highlights the urgency of resuming the OSCE monitoring on the ground, as soon as conditions allow.”

Stano said that the EU called on both sides to devote resources to fighting the coronavirus pandemic and meaningfully re-engage in substantive negotiations to “prepare their populations for peace.”

Following a Russia-brokered fragile truce in 1994, the Nagorno-Karabakh region has been under the control of ethnic Armenian forces that Azerbaijan says include troops supplied by Armenia. The region’s claim to independence has not been recognised by any country.

The ethnic Azerbaijani population of Nagorno-Karabakh has been expelled from their homelands and lives as internationally displaced persons (IDPs) in Azerbaijan.