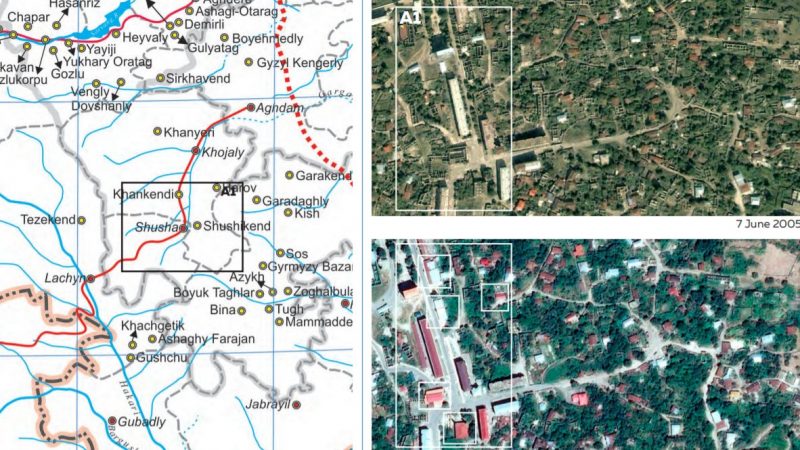 The growingly unstable and dangerously unpredictable situation in the conflict between Armenia and Azerbaijan over the occupied Nagorno-Karabakh and surrounding regions of the latter has been further aggravated by increasingly more provocations by the Armenian side.

Emboldened by the military support it enjoys from its external patrons, Armenia has even started attacking the units of the Azerbaijani army in the territories beyond the occupied region as exemplified in the July 2020 clashes between the two sides in the Tovuz region of Azerbaijan.

In a few weeks following this escalation, Armenians made another provocative move by promoting illegal settlements in the occupied territories of Nagorno-Karabakh and beyond that are recognized internationally as belonging to Azerbaijan.

On 5 August, after the explosion in Beirut, Lebanon, Armenian media reported a decision by the leader of Armenia’s subordinate regime in Nagorno-Karabakh Arayik Harutyunyan to immigrate Lebanese Armenians of 100 – 150 families.

Towards the end of August, 2 families have reportedly arrived in the region and been provided with necessary living conditions by the local authorities.

The Armenians living abroad are seen as the favourite people for this purpose, as local Armenians protest the proposals to allow the inflow of other nations to their strikingly monoethnic and remarkably nationalist society, even though this is supported by the government as a possible remedy to the domestic demographic crisis.

The immigration of Armenians based in foreign countries is part of Armenia’s policy to populate the occupied territories to consolidate the occupation and create a fait accompli for the future negotiations on the status of the region.

Bako Sahakyan, Harutyunyan’s predecessor, had determined the expansion of the settlements in the adjacent territories around Nagorno-Karabakh as a priority for 2017 – 2020. In 2018, for the first time, funds ($800,000) from the budget of the occupational regime were allocated to populate and develop new settlements in this region.

Azerbaijan has long warned that Armenia, violating the internationally-accepted laws and norms, including the Geneva Convention of 1949 and its Additional Protocols, builds settlements in the Nagorno-Karabakh and surrounding regions, although according to the international law, states that seize a territory of another state by force are not allowed to populate that territory with their own citizens.

The Co-Chairmen of OSCE Minsk Group, an international body tasked with the mediation of the resolution of the Armenia – Azerbaijan conflict, emphasized that “[p]rolonged continuation of this situation could lead to a fait accompli that would seriously complicate the peace process.”

They “discourage[d] any further settlement of the occupied territories of Azerbaijan” and “urge[d] the parties […] to avoid changes in the demographic structure of the region, which would make more difficult any future efforts to achieve a negotiated settlement.”

In a similar vein to the four resolutions (1993) of the UN Security Council that demanded immediate withdrawal of the Armenian armed forces from the occupied territories of Azerbaijan, the call of the OSCE’s Minsk Group for the suspension of the settlements failed to affect the process.

The Minsk Group, in another fact-finding mission from 7 to 12 October 2010, discovered developments detrimental to the peace process including new illegal settlements by ethnic Armenians. Revealing the settlement of around 14,000 Armenians in the occupied seven districts of Azerbaijan, they urged Armenians “[…] to avoid any activities in the territories […] that would prejudice a final settlement or change the character of these areas.”

Azerbaijan sees the construction of new settlements in the occupied territories as “another testimony of the deliberate efforts towards creating a new demographic situation on the ground and preventing the return of the Azerbaijani displaced persons to their homes”.

The Ministry of Foreign Affairs of Azerbaijan asserts that Armenia must be held accountable for its illegal activities in the occupied territories of Azerbaijan which has been named so by numerous international organizations, including the European Course on Human Rights.

The Court’s resolution in 2015 ruled that Armenia exercises effective control over the occupied region of Azerbaijan and is responsible for them under the European Human Rights Convention.

Nevertheless, the major states and international organizations that hold the power to affect the process and help the de-occupation of Azerbaijani territories seem reluctant to take action. This happens against the backdrop of the loud criticism and practical measures by those states in the case of, for instance, the settlements of Israel in the Palestinian territories.

Not only do such inconsistent international policies and the maintenance of double standards threaten the international peace and security, but also ultimately legalize the illegal activities and encourage others to reach their unlawful objectives through the use of force and violation of international law and norms.

This is therefore important for all the states and international organizations to take a strong position against Armenia’s settlements in the occupied territories of Azerbaijan and demand its leaders to put an end to the creeping expropriation of these territories.