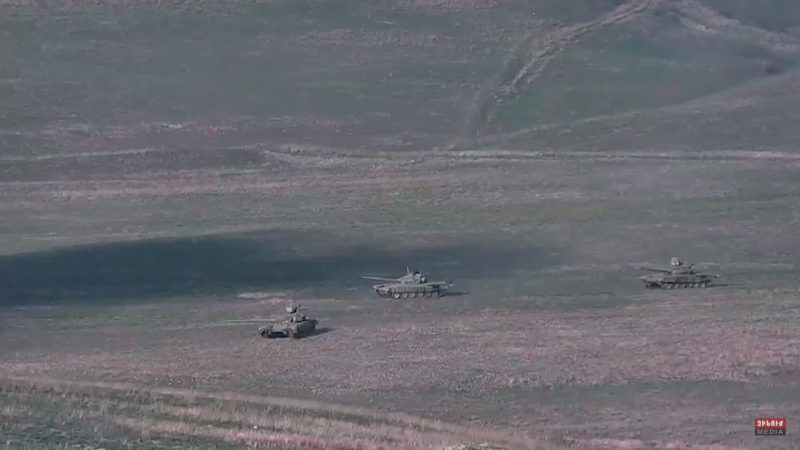 A frame grab from handout video provided by the Armenian Ministry of Defence allegedly shows Azerbaijani tanks at the frontline of the occupied territory of Nagorno-Karabakh, issued 27 September 2020. [Handout photo/EPA/EFE]

The early morning hours of 27 September 2020 marked another provocation launched against Azerbaijan by the Armed Forces of the Republic of Armenia, writes Esmira Jafarova.

Dr Esmira Jafarova is a board member at the Center of Analysis of International Relations in Baku, Azerbaijan.

The Armed Forces of Armenia by using large-caliber weaponry, mortars and all sorts of artillery initiated intensive shelling of the positions of Azerbaijani Armed Forces along the frontline as well as of the populated areas in Qapanli village of Terter, Chragli and Orta Garvend villages of Aghdam, Alkhanli and Shukurbeyli villages of Fizuli, and Jojuq Merjanli village of Jabrayil districts.

As a result of this intense shelling the Azerbaijani side reported dead and injured among civilians and military servicemen.

The OSCE Minsk Group issued a statement on 27 September, which strongly condemns “the use of force and regret the senseless loss of life, including civilians” and appeals “to the sides to cease hostilities immediately and to resume negotiations to find a sustainable resolution of the conflict”.

Armenia has declared martial law and full military mobilization. Azerbaijan reacted immediately to this onslaught by the Armed Forces of Armenia through counter-offensive measures, and as of this writing the Defense Ministry of Azerbaijan announced the liberation of six villages in the direction of Fizuli and Jabrayil districts.

Since the July clashes, Azerbaijan expressed warnings that it expects provocations by Armenia at any time along the border. Despite the transient respite over the couple of months the situation nevertheless remained tense with sporadic violations of the ceasefire. As a result, on 22 September Azerbaijan reported the killing of its another servicemen by Armenian Armed Forces.

Moreover, this period was also fraught with purposeful provocations by Armenia. This country intensified its reconnaissance and sabotage activities along the front line and on 23 August Azerbaijan’s Ministry of Defense reported capturing First Lieutenant Gurgin Alberyan, the commander of the Armenian sabotage group. Over the last months Azerbaijan’s Ministry of Defense also reported destroying Armenia’s several tactical UAVs that attempted to carry out flights over the positions of the units of the Azerbaijani Army.

The above events in fact became the continuation of previous provocations. This also holds true because the provocations on the frontline were also accompanied by political provocations, nationalistic statements and cultural revanchism that the current leadership of Armenia has opted for as its foreign policy course vis-a-vis Armenia-Azerbaijan conflict.

The list of provocations include Nikol Pashinyan’s infamous ‘Karabakh is Armenia and period’ statement that was also coupled with the rejuvenation of a revanchist miatsum (unification) ideology in regard to the Nagorno-Karabakh region of Azerbaijan; the organization of the so-called ‘parliamentary and presidential elections’ in the occupied territories of Azerbaijan; and Pashinyan’s visit to the historical Azerbaijani city of Shusha in May 2020 to participate in celebrations.

Shusha carries a deeply emotional, close to sacred cultural importance for Azerbaijan and throughout centuries was seen as the “cradle” of Azerbaijani culture. However, Pashinyan Government seems to care less about the repercussions of its actions. Apart from paying regular visits to Shusha and conducting celebrations, Armenia’s leadership decided to illegally settle about 100-150 Armenian families from Lebanon in the occupied Azerbaijani territories, including in Shusha, in contravention to the norms and principles of international law, and the Fourth Geneva Convention. Moreover, the recent announcement by the leaders of the illegal regime in the Nagorno-Karabakh region to move the so-called parliament to Shusha is highly provocative and stands out as a vivid example of cultural revanchism employed by Pashinyan Government.

Furthermore, at the end of August, Anna Hakobyan, the wife of Nikol Pashinyan, participated in publicized military training in the occupied territories of Azerbaijan; her posturing, picturing Azerbaijani subjects, went viral on social media. This occurred only one year after her famous call for peace. Unfortunately, this military posture of Anna Hakobyan is nothing new as previously, in 2018, Pashinyan and his wife sent their son to serve in the occupied territories of Azerbaijan.

The list of provocations staged by the current leadership of Armenia is quite long and is not exhausted in this writing. Recently, the Ministry of Foreign Affairs of Azerbaijan issued a statement citing the list of purposeful provocations by the Pashinyan Government since his ascension to power. Undoubtedly, the chain of purposeful provocations in regard to the Armenia–Azerbaijan conflict, instrumentalized by Armenia’s leadership have already dealt a serious blow to the peace negotiations.

This is even more so, since in early 2020 Armenia also rejected the existence of any document at the negotiation table, despite both sides, under the auspices of the OSCE Minsk Group co-chaired by France, Russia and the US, working on the so-called Madrid Principles for the resolution of the conflict for over a decade.

Unfortunately, the September clashes is a notorious sequel to the 12–14 July clashes as well as preceding and accompanying provocations by Armenia’s incumbent leadership. Despite the occupation of its territories for over three decades Azerbaijan remained committed to peace process and finding a negotiated solution based on the norms and principles of international law, and the relevant resolutions of the UN Security Council (822, 853, 874, 884). Armenia has been openly flouting those resolutions for about three decades and the militaristic-revanchist stance rigorously pursued and demonstrated by incumbent Armenian leadership leaves no hopes for optimism that Armenia might commit to meaningful peace negotiations from now on.

During his address at the 75th session of the UN General Assembly, President Ilham Aliyev called for the preparation of the updated timetable for withdrawal of armed forces of Armenia from the occupied Azerbaijani territories. He also noted that “the UN Security Council resolutions are not time-specific. These resolutions are valid until they are implemented. Misinterpretation of UN Security Council resolutions is unacceptable”.

Unfortunately, what we are witnessing today on the frontline is a direct consequence of misinterpretation and non-implementation of the above resolutions. Instead of abiding by the legally binding resolutions of the UN Security Council and heeding to the numerous calls and relevant documents of the international community, Armenia’s leaders, both previous and unfortunately, also the incumbent, chose to exploit sensitivities through heightened nationalism, militarism, populism, and revanchism. This road unfortunately leads to an impasse, increased instability, warmongering and deadly military hostilities, the kind of which we have already seen in July and also at present.